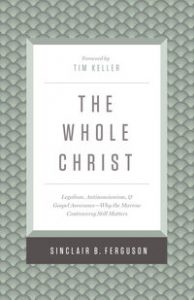 In an age characterized by both self-indulgence and anxiety, Sinclair Ferguson addresses in The Whole Christ the always pressing issues of legalism, antinomianism and assurance of salvation.  Ferguson served as senior minister of First Presbyterian Church in Columbia, South Carolina and is professor of systematic theology at Redeemer Seminary in Dallas, Texas and author of a number of books, including The Holy Spirit and In Christ Alone: Living the Gospel-Centered Life.

Here Ferguson looks back to an instructive moment in Protestant church history – the “Marrow controversy” in early eighteenth-century Scotland – in order to glean insights for handling the relationship between God’s grace and God’s call for obedience in the believer’s life.  The introduction and first chapter shed light on the background and significance of the Marrow controversy, which centered on a book entitled The Marrow of Modern Divinity that was deemed antinomian by some Scottish Presbyterians but was and is believed by traditional Reformed and Presbyterian theologians to contain a sound presentation of the relationship between God’s grace and God’s law in the Christian life.

In chapter two, Ferguson draws from the Marrow controversy to emphasize the importance of the free offer of the gospel to all persons.  Chapter three explores the harmful effects of “preparationism,” according to which the hearer must exhibit certain fruits of election before hearing the gospel.  Ferguson identifies this approach to evangelism as an assault on the goodness and generosity of God.

Chapter four considers the nature of legalism, the root of which is a failure to see and trust in the goodness of God.  In chapter five, Ferguson then sketches an ordo salutis – a discernible logical ordering of the benefits of salvation in Christ, like justification, sanctification and so on.  In God’s economy the “indicative” (what is true of those who are in Christ) precedes the “imperative” (what God calls believers in Christ to do).  Chapter six points up various signs to help diagnose legalism in one’s heart and actions.

Chapter seven focuses on antinomianism and maintains the normative function of the Decalogue in the Christian life.  The eighth chapter contends that antinomianism ultimately emerges from a legalistic heart and envisions a positive (Pauline) place for the law in the life of faith.  Finally, chapters 9-11 deal with the problem of assurance, examining whether it is included in the essence of faith and explaining how one can possess assurance under the ministry of the Holy Spirit.

A number of helpful features in The Whole Christ stand out.  First, Ferguson argues that at the foundation of a right view of grace, law and assurance is a right view of the good and loving God of salvation.  Many Christians struggle to trust in the goodness of God and will be encouraged by Ferguson’s insistence on it.  Second, Ferguson’s emphasis on union with Christ throughout the book is salutary.  Whenever we separate the benefits of Christ (faith, justification, sanctification and the rest) from the Savior himself or from one another, we develop a lopsided and pastorally hazardous understanding of salvation.  Third, in chapter ten Ferguson introduces readers to the illuminating distinction between the “direct” and “reflexive” acts of faith.  The former refers to the believer’s trust in Christ and his saving work, while the latter refers to the believer’s confidence that he or she belongs to and is secure in Christ.  The former is primary and “contains within it the seed of assurance” (p. 197).  The latter is never the instrument of salvation and may be had in greater and lesser degrees throughout the Christian life.

On a minor critical note, I wonder whether the arrangement of the material might have been better if the historical sections on the Marrow controversy were gathered up into one chapter for the sake of clarity and proportion, instead of embedding parts of the historical description in different chapters and sometimes rehashing the events (e.g., pp. 77-8).  Also, a few turns of phrase might, if he or she is not careful, leave the contemporary reader confused for a moment.  For example: “repentance is not a qualification for coming to Christ” (p. 97).  Does this mean that repentance is not in any way included in one’s initially coming to Christ (as in Mk. 1:15; Acts 2:38)?  To be fair, one need only read on and ascertain that Ferguson is simply emphasizing that there are no pre-requisites for hearing the gospel and initially turning to Christ and that faith in Christ logically precedes repentance (pp. 98ff.).

To locate this book in the broader field of theological study today, a few comments are in order.  First, it can be read profitably as a study in soteriology and the Christian life.  Its historical, exegetical, and dogmatic reflections will be beneficial for students of Scripture and Christian theology and practitioners in pastoral ministry.  Second, it models nicely a decidedly theological (rather than a self-help or pop psychology) approach to understanding discipleship.  Too often Christians look to trendy books with “steps” to success or happiness and will find a book of this sort to be a welcome break from such shallowness.  Indeed, The Whole Christ exhibits well the fact that what may seem like strictly theoretical considerations in fact powerfully bear on one’s daily Christian experience and will repay our attention.

Third, The Whole Christ illustrates the importance of understanding church history.  That there really is nothing new under the sun is borne out in the history of the Christian church, and studying the past gives us access to debates and controversies where ideas, concepts and patterns of thought have run their course and proven to be either fruitful or spiritually harmful.  Rather than reinvent the wheel every time we approach an exegetical or ministerial problem, we do well to know what the generations before us have already learned and passed on to us as wisdom for today.  Fourth, Ferguson writes as a Calvinist, and “Calvinism” is a frequently used and sometimes poorly understood term in contemporary Christianity.  In this connection, some readers may be pleasantly surprised to learn that mainstream traditional Reformed and Presbyterian theology would so adamantly speak of the goodness and fatherly love of God in saving sinners.  Fifth, “grace” also is a frequently used and sometimes poorly understood term, especially when some evangelical leaders have recently reduced sanctification to a matter of simply believing more in justification by grace.  Ferguson strikes the balance in instructing us both to rest in Christ alone as the basis of our salvation and in reminding us that those who are in Christ must and will grow in loving obedience to the Father.

Other available resources can help readers explore the issues covered here in more historical and technical detail, including the relevant chapters of Joel Beeke’s and Mark Jones’s Puritan Theology: Doctrine for Life and volume 4 of Herman Bavinck’s Reformed Dogmatics.  However, for students and, indeed, for any Christian seeking to grow theologically and spiritually, The Whole Christ is a great place to start. 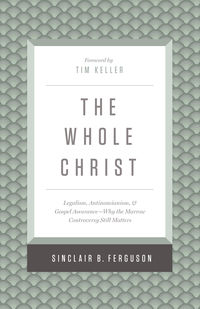