Garlington, Don. A Commentary on the Greek Text of Second Corinthians. Eugene, OR: Cascade, 2016, pp. 473, paperback. 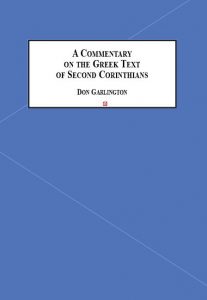 It has been said that “of the writing of commentaries there is no end.” Even though this reality could lend itself to a stale treatment of texts already analyzed, A Commentary on the Greek Text of Second Corinthians is a welcome resource to Greek students and pastors alike. In distinction from other kinds of commentaries, this commentary by Pauline scholar Don Garlington has as its target audience “students of the Greek New Testament” and thus functions as “a kind of ‘halfway house’ between the likes of Murray Harris and Margaret Thrall, on the one side, and Philip Hughes and Mark Seifrid, on the other” (p. xi). The result of this endeavor is a commentary that focuses on analysis of the Greek grammar and syntax of 2 Corinthians. Even though Garlington occasionally mentions the historical-cultural background of a passage, the focus is more on exegetical insights deriving from grammatical and syntactical analysis. The introduction, therefore, is understandably minimalistic, with a brief section on the purpose of the letter (to prepare the Corinthians for Paul’s upcoming visit), the contents of the letter (the opponents at Corinth are deemed to be Judaizers), and the integrity of the letter (Garlington sees no good reason to doubt its integrity).

The strength of the commentary, therefore, is its ability to provide one with analysis of the Greek text of 2 Corinthians. At the outset of each subsection, the Greek is provided, although one needs to know Greek since no translation appears alongside. Further, the Greek text is divided into clauses or phrases and indented to show subordinate and modifying relationships. Even though the nature of the relationships aren’t always made clear, this user-friendly portrayal of a passage allows for easy analysis of the passage’s flow of thought at a glance. The commentary is also consistently conversant with the major Greek lexica (e.g., BDAG) and grammars (e.g., BDF, Zerwick), which is convenient to a Greek student learning how to use such resources. Additionally, the commentary utilizes syntactical categories that a typical second-year Greek student should recognize (e.g., anarthrous definite article, subjective/objective genitive, first-class conditional sentence, ingressive aorist, Apollonius’ Canon), and Garlington helpfully labels—and in some places defines—various rhetorical devices in the text (e.g., anacoluthon, asyndeton, hendiadys, litotes, paronomasia, metonymy, epidiorthosis, paraleipsis). Finally, whenever the syntax is ambiguous, the commentary lists the major interpretive options, with an asterisked option at the end marking the view preferred by the commentary (although the reasons for the preferred view aren’t always clear).

Two other strengths are worth mentioning. First, throughout the commentary there are select bibliographies for each subsection and categorized by topic. The bibliographies provide the best up-to-date secondary literature on the theme in question (e.g., suffering in 1:8-11). The bibliography for 5:14-21 is especially good, covering the categories of “flesh” as sin, Christ the last Adam, Christ the servant, the new creation, reconciliation, atonement/sacrifice/redemption, righteousness/justification (pp. 178-84). Students and pastors should find these focused lists helpful for deeper study of a passage.

Second, the commentary is aware of the prominence for Paul of the Old Testament in 2 Corinthians. Even though analysis is necessarily brief due to the focus of the commentary, Garlington still highlights biblical-theological themes in the letter, such as Paul’s greeting in 1:2 against the backdrop of God’s covenant love for his people (4), the triumphal procession in 2:14 as linked to the prophetic hope of the return to Zion (64), and the exodus imagery of 3:1-4:6 (p. 103). The last Adam imagery is likely overemphasized in a few places (e.g., 3:18; 4:4, 16; 5:21), and Garlington’s view of righteousness as covenant faithfulness won’t convince everyone (e.g., pp. 178, 290, 345), but this need not reduce the value of these biblical-theological highlights.

There are a few weaknesses of the commentary, although none significantly detract from its overall value. There is little discussion of the text-critical questions in various places in 2 Corinthians, even if occasionally the mention of such a question is raised (e.g., p. 392). Garlington also appears to commit an etymological fallacy in analyzing the meaning of katargeō in 3:13 (p. 93), and there are some questionable exegetical conclusions regarding whether or not a noun or prepositional phrase is emphasized based on where it appears in its clause (e.g., p. 129). Further, the many typos throughout the volume also may irritate some readers, even though authorial meaning is always clear.

Additionally, given the focus of the commentary on Greek grammar and syntax, it is rather surprising that the insights deriving from verbal aspect were not more prominent. The relationship between tense and aspect in the Greek verb is one of the most heavily debated questions among Greek grammarians, but the debate and its exegetical value played little role in the commentary. Moreover, many Greek grammarians believe time to be grammaticalized within the indicative mood, but almost none would argue that it is grammaticalized in the non-indicative moods. Nevertheless, Garlington appears to hold this view, labeling the aorist participles in 1:22 as indicating “past historical and once-for-all actions” (p. 39; cf. 262, 270), despite the fact that most Greek grammarians today would reject such an analysis of the aorist tense-aspect.

Nevertheless, these weaknesses do not detract from Garlington’s otherwise solid analysis of the Greek text of 2 Corinthians as well as the commentary’s user-friendly approach. The commentary should prove especially fruitful to a Greek student seeking to apply their knowledge to a book of the New Testament. Perhaps also a pastor preaching through 2 Corinthians would find this commentary useful in deriving exegetical and theological insight from an analysis of the syntax and structure of the Greek text.