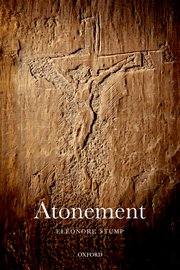 Eleonore Stump is the Robert J. Henle Professor of Philosophy at Saint Louis University and an Honorary Professor at the Logos Institute for Analytic and Exegetical Theology. Stump has authored or edited a number of works on Medieval philosophy and theology. Her Gifford Lectures, titled, “Wandering in Darkness: Narrative and the Problem of Suffering” was published by Oxford University Press.

First, I should mention that her understanding of “atonement” avoids “narrow” understandings of atonement that equate atonement with removing guilt by means of Christ’s crucifixion and death. Instead, Stump opts for a broader understanding of atonement, one that takes seriously the etymology of the word—”at-one-ment”—and uses the term to refer to the life, passion, and death of Christ which brings about the at-one-ment of God and humans. On Stump’s interpretation of atonement, Christ’s work solves three problems: 1) the human disposition to wrongdoing, 2) guilt’s impairments on the psyche of the wrongdoer and out in the world, and 3) shame (p. 19). These three problems, constitute a barrier to union with God. A person who does not have a disposition to love God, who feels shame before God, and feels guilt will not be able to be in a relationship of union with another person. Christ, whose human nature allows him to open up his psyche to other humans, opens himself up to receive the psyches of all human beings; when he does so, he bears human sin on the cross (p. 342). This action, which is undertaken by Christ, fulfills two aspects necessary for at-one-ment: the removal of shame and guilt. Yet, the removal of guilt and shame is not enough for at-one-ment; if union with God is to be complete, a person must also willingly open themselves up to God. According to Stump, God cannot unilaterally bring it about for a person to desire union with God. Stump’s solution to this problem is to claim that Christ’s death on the cross has such a rattling effect upon the human psyche that any fear of God’s love that would prevent a desire to be united to God simply falls away upon seeing the powerlessness and vulnerability of Christ suffering upon the cross. With shame and guilt removed and a new disposition for desiring union with God, human persons can experience the union with God that God always has desired for them.

Stump ought to be commended for her contribution to the literature on atonement. Her emphasis on shame as an integral malady with which the atonement deals is pastorally significant. As any person involved in ministerial work knows that people do not deal only with guilt; rather, they suffer also from shame brought about by their sin. While I am not under the impression that the doctrine of atonement must deal with all of our problems, it seems fitting that Christ’s shameful death on the cross would deal with the problem of shame. How does Christ’s shameful death on the cross deal with the problem of personal shame? Knowing that “the most powerful and most good being possible” desires union with you and is willing to go to such extreme lengths to become united with you has the power to trump any sense of personal shame. As Stump states: “All shame is defeated and falls away” (p. 362).

Despite this strength, the book does suffer from some weaknesses. Some of these weaknesses, for example her claim that “justification” is the term for “moral and spiritual regeneration,” can be charitably ignored by Protestant readers provided one understands that she writes from a Roman Catholic perspective (p. 203). More significant, however, is her argument against Anselmian logic of satisfaction in theories of atonement. She categorizes “Anselmian” kinds of interpretations of atonement as those which “suppose that God is somehow required by his honor or justice or some other element of his goodness to receive reparation, penance, satisfaction, or penalty to make up for human wrongdoing as a condition for forgiving sinful human beings and accepting reconciliation with them” (p. 71). Stump sees Anselmian interpretations—including penal substitution—as highly problematic. She claims Anselmian interpretations offer no solution to our present dispositions towards wrongdoing and that it leaves the problem of shame untouched. What is unclear, however, is why one must think that atonement solves the problem of our present dispositions? On a narrow understanding of atonement, atonement deals with a very specific problem; it is not meant to deal with all problems regarding the human condition. Advocates of a narrow view might respond to her objection by appealing to the Holy Spirit’s role in changing one’s dispositions. Furthermore, it is not clear why Christ’s willingness to make satisfaction for sinful humans would not have the effect of trumping personal shame in a way similar to her understanding of how God’s desire for union with us trumps one’s personal shame.

Despite what the simple and straightforward title might imply, Atonement is a technical monograph, it is not an introduction to the doctrine of atonement. Prior to engaging with Atonement, I would advise students to develop their understanding of historic doctrines of atonement. This will allow students to weigh the strength of Stump’s interpretations of Anslem, Aquinas, and penal substitution. Students ought to pay attention to how Stump characterizes the Anselmian interpretation, the theological method she employs, and the way she incorporates psychological literature into her theology. Psychology engaged theology is trending upward; Stump provides a model that students might want to emulate if they desire to engage in this trend. Although I am neither convinced by her objections to Anselmian interpretations nor her “Marian interpretation,” Atonement is the most constructive account of atonement in recent years so I recommend it to those versed in discussions regarding the doctrine of atonement.