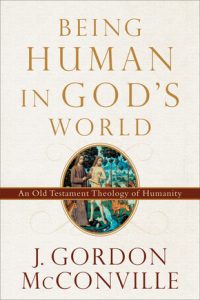 Being Human in God’s World is not a systematic theological investigation of anthropology but rather a biblical theology and spirituality (p. 5). That is, in considering the Old Testament’s perspective on humanity, the reader is challenged to be transformed by it. McConville writes as a Christian and believes the Old Testament’s perspective on humanity can help Christians better understand Christ’s humanity (p. 3).

Chapter one discusses humanity’s creation in the imago Dei. McConville states that the imago Dei “tends to open up questions about God and the human being rather than close them down at the outset (p. 29). He argues the imago Dei refers primarily to the interaction between humans and fellow humans (e.g., relationality), humanity, and creation (e.g., representing God’s presence), and humanity and God (e.g., subservient rule). The driving question of the book is Psalm 8:4 [5], “What is the human being, that you should pay attention to them?”

Chapter two analyzes the relationship of the imago Dei in Genesis 1 to the narrative of Genesis 2-3. Here McConville sees both the tragedy of humanity’s grasping at a false godlikeness but also the continued possibility of human potential as imago Dei in a fallen world. Chapter three discusses Old Testament terms (e.g., heart, mind, soul, etc.) commonly used to describe humanity. Chapter four discusses various modern cultural conceptions of the self and their relation to the biblical depiction.

Chapter five examines the Old Testament’s use of types and metaphors (e.g., marriage, sonship) to describe humanity’s relationship with God. Chapter six analyzes the importance of place and memory as an inseparable part of human identity, especially for Israel. Chapter seven discusses the political realities inevitably created by human interactions. Chapter eight examines humanity as male and female, including the possibility of sinful exploitation. Chapter nine examines work and creativity as a natural outflow of being made in God’s image. Chapter ten concludes the book with an examination of the Psalms and worship as an essential part of the imago Dei.

Readers of McConville’s work will appreciate his textual focus. McConville masterfully integrates the perspective of the Torah, Prophets, Historical Books, and Wisdom literature, with perhaps a weighted focus on Deuteronomy. In addition to many helpful exegetical insights, McConville gives careful attention to the rhetorical or transformative aims of the text. For instance, the aim of Deuteronomy is not simply to recapitulate the law, but to shape the identity of God’s people for generations. The Old Testament, especially Deuteronomy, challenges Israel to remember the gifts of covenant and land, and to cultivate a culture where the blessings of both can be appreciated, shared, and perpetuated (pp. 105-117).

The underlying argument of the book is that the embodied, situated, and lived reality of the imago Dei in a fallen world leads to incredible possibility but also tragic limitation. In the area of politics, male and female relationships, and work and creativity, there is ample Old Testament evidence of both flourishing and suffering. David is both a man after God’s own heart yet an abuser of power (pp. 137-146). Men and women can commit to one another in joyful faithfulness, yet they can also live in fear of exploitation or abandonment (pp. 152-159). Work and creativity reflect God’s beauty, but the Wisdom literature in particular tempers unhealthy optimism in human potential (pp. 174-175). McConville’s treatment of the Wisdom perspective is very helpful as Wisdom is often overlooked in discussions of biblical anthropology.

McConville’s chapter on place and memory is a gem of the book. Human experience, McConville argues, is necessarily rooted in a physical location and a particular moment. Human flourishing requires an awareness and appreciation of God’s gift of place. McConville describes aspects of “placedness” (p. 101) as worship, food, and memory. Israel, including the poor and aliens, partake of the food of the land in the act of worship to God. Israel’s feasts, assemblies, and institutions are all part of its “performative memory” (p. 116), whereby the identity of Israel as God’s people is reinforced and reaffirmed. In this chapter, McConville convincingly demonstrates how Old Testament anthropology cannot be separated from the world God created humans to inhabit.

In addition to the book’s textual focus, McConville brings the Old Testament in conversation with a variety of voices including ancient Greeks, Shakespeare, and modern literary and artistic trends. In citing broadly, McConville demonstrates the kind of lively human engagement he believes the Old Testament propounds.

A few weaknesses and oddities are also present. For instance, the final chapter on the Psalms presents a powerful argument for the centrality of worship in human life, but it is noticeably shorter than the other chapters. Its length gives it the feel of a late add-on to the work rather than a conclusion. Curiously, McConville at the outset, mentions the potential of Old Testament anthropology in helping Christians better understand the humanity of Christ but does not return to this subject later in the book. A subsequent revision might find a discussion of Christ’s humanity a more fitting conclusion.

Overall, the book is a helpful entry point to Old Testament anthropology from a biblical-theological perspective. Its length makes it very accessible, and the topics McConville chooses to explore are relevant to discussions beyond the realm of Old Testament theology. This work finds its highest value in that it challenges the reader to consider the theology of humanity as a lived reality. Indeed, McConville shows how the Old Testament continues to transform readers as they consider life’s possibilities as image bearers in a broken, yet beautiful world. 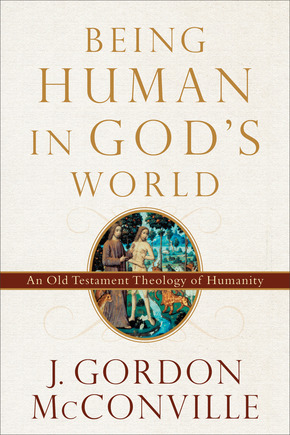