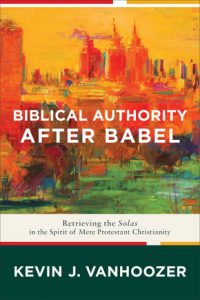 Vanhoozer’s book is a systematic exposition of the five Reformation “solas,” intentionally relating them to the issue of interpretive authority.

This chapter “addresses the charge of secularization by locating biblical interpreters and interpretation in the all-encompassing economy of triune communicative activity” (p. 61). “Grace is the way in which God extends himself to the world so that creatures can come to know and love him” (p. 36), which is also to say that grace is “the overarching framework of [the gospel’s] communication and reception” (p. 45). God is “eternal personal relations” (p. 51)—i.e., Trinity. Though God is under no compulsion to create, he nevertheless did. Likewise, God being under no compulsion to redeem did redeem. Vanhoozer calls such God’s sharing of his love, life, and light “triune communication” (p. 52), which is grace (“God giving what is not owed” [p. 53]). Christians find themselves in this realm of grace wherein God not only “enables us to grow more like [him]” (p. 58), but also brings us into communion with him by “sharing in union” with him (p. 59). As a result, grace does not perfect “natural interpretive acts,” but it rather “restores interpretive agents to right-mindedness and right-heartedness and reorients interpretive acts to their proper end: receiving Christ into our hearts and minds” (p. 65).

This chapter, along with chapter 3 below, addresses “the charge of skepticism by focusing on the principle and pattern respectively of what I will describe as the economy of theological authority [i.e., “rightful say-so,” (p. 84)].” “What . . . is the role of faith in biblical interpretation” (p. 72)? Like Calvin in Inst. 1.7.4, Vanhoozer places “epistemological priority” (p. 72, quoting Goldsworthy) in the Holy Spirit because the Holy Spirit is “the ultimate authority of [Scripture’s] interpretation” (p. 77). The “righteous polis” (p. 103)—the church—is God’s authorized interpretive community that the Spirit both summons and attends, as this polis attends the “work of other interpreters (and communities of interpreters)” in order to respond “to the voice of the Triune God speaking in the Scriptures to present Christ” (pp. 104, 105). Vanhoozer calls this the principle of divine authority.

Building off of the previous chapter, this chapter sets out to explain the pattern (or practice) of interpretive authority. Vanhoozer carefully defines sola scriptura: “‘Scripture alone’ does not mean ‘Scripture abstracted from the economy of grace’ or ‘Scripture apart from the community of faith’ or even ‘Scripture independent of church tradition’” (p.111); rather, “Scripture ‘alone’ is the primary or supreme authority in theology” (p. 111), though there are certainly other authorities out there (pp. 121–122, 139–143). Ultimately, for Vanhoozer, the pattern of interpretive authority “begins with the Triune God in communicative action, accords first place to Scripture interpreting Scripture . . . but also acknowledges the appointed role of church tradition in the economy of testimony” (p.143).

This chapter “addresses the charge of schism by focusing on the royal priesthood of all believers” (p. 61). “The church is the domain where Christ’s rule becomes flesh, embodied in the royal priesthood” (p. 179). “All believers are priests and, as such, responsible for teaching, sharing, and embodying the Word” (p. 158). This priesthood is royal because the church is “a living parable of the kingdom of God” (p. 161) that has “freedom and responsibility of every Christian to minister the gospel in word and deed to one’s neighbor” (p. 158). All pastors are royal priests; however, not all royal priests are pastors. How, therefore, does one distinguish between the two? “The main difference between a royal priest and a pastor is that the latter performs his or her office . . . in public. ‘These are not two different ministries. They are two forms of the same ministry’” (p. 167, citing Brown, The Spirit of Protestantism, 103). The church holds the keys (i.e., authority) of the kingdom, which represents “the authority of the local church as an interpretive community” (p. 173) that carries “the unbroken line of [not apostolic succession, but] . . . the apostles’ message, the testimony and tradition preserved in Scripture” (p. 169). Vanhoozer locates such keys of authority within local congregations who “make binding interpretive judgements about the meaning of Scripture” (p. 176), who also “have an obligation to read [and thus interpret] with other local churches” (p. 176).

Chapter 5: For the Glory of God Alone

This chapter addresses “the challenge of hyperplurality and interpretive disagreement in the church” (p. 61). Vanhoozer’s response to the interpretive plurality of Protestantism is to leave intact the theological boundaries of various local churches, while demonstrating communal (i.e., catholic) unity despite these differences. He call this “unitive (catholic) Protestantism, a lived ecclesiology that glorifies God by exemplifying the fellowship the saints have in Christ through the Spirit” (p. 182). Therefore, “there is a communion within a church and a communion between churches” (p. 191). And for Vanhoozer, this “unitive Protestantism” is the glory and genius of the unifying power of the gospel.

Vanhoozer’s project is a worthy read for any pastor, student, or theologian wanting to know more about the relationship between scriptural authority and the authority of those interpreting Scripture. Vanhoozer is up front and honest about the problems or predicaments Protestants find themselves in regarding the charges of interpretive anarchy within society, the academy, and the church (pp. 16–30). Furthermore, Vanhoozer is widely read, nuanced, and thorough; his systematic and philosophical background are very obvious in this work.

Because I have chosen to devote so much space to expositing Vanhoozer’s work, I limit my critiques to two. I leave the reader to determine whether my critiques are valid and charitable.

First, I question whether or not Vanhoozer completely solves the problem of interpretive anarchy. Like Calvin, the supreme supposition in his “unitive Protestantism” is the “epistemological priority” of the Holy Spirit in the interpreting of Scripture. In my reading, Vanhoozer does not answer the question of how one can know whether or not the Holy Spirit is guiding one’s interpretation? The closest he comes, again from my reading, is in the conciliar council model, but who arbitrates these conciliar gatherings? And how do we know if that arbiter is authoritative?

Second, Vanhoozer’s appropriation of the church fathers, at times, seems uninformed at best and irresponsible at worst. For example, on pp. 118–19, he asserts that Irenaeus (Against Heresies 1.10.1) understood tradition to be equal with what is contained in canonical Scripture. This seems like a stretch because in this text Irenaeus does not speak of the content of Scripture (let alone canon, which was not yet established by Irenaeus’s time). Furthermore, in Against Heresies 3.2.2 he speaks specifically about tradition being “preserved by means of the succession of the presbyters in the Churches.” A careful reading of the early fathers will certainly demonstrate that their understanding of the relationship between tradition and Scripture is a different than many assert today. Vanhoozer makes a similar stretch with Ignatius (p. 147) and Cyprian (pp. 147–48). I leave the reader to examine Vanhoozer’s citations and consult the primary documents that he cites.

Nonetheless, despite these two critiques, Vanhoozer’s book should be read by all pastors, students, and theologians, for the intersection of scriptural authority and interpretive authority is no light matter. And this insightful book has, in my judgement, progressed our understanding that very intersection. 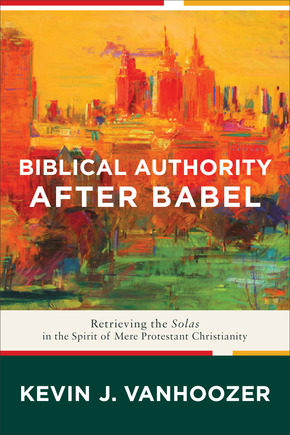