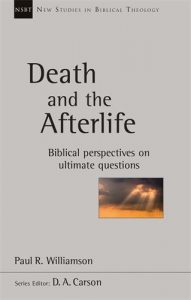 Paul R. Williamson serves as professor of Old Testament, Hebrew, and Aramaic at Moore College in Sydney, Australia. Among his many published works, Williamson made a previous contribution to the NSBT series in his work, Seal with an Oath (InterVarsity, 2007), where he examined the nature of the biblical covenants as central to God’s advancement of universal blessing. He is a contributor to the New Dictionary of Biblical Theology (InterVarsity, 2000) and the co-editor of Exploring Exodus: Literary, Theological and Contemporary Approaches (InterVarsity, 2008).

In his most recent publication, Death and the Afterlife: Biblical Perspectives on Ultimate Questions, Williamson explorers the metaphysical reality of death and the afterlife from the vantage point of the Bible’s storyline. After a brief examination of the literature in ancient religious cultures, chapter one outlines the trajectory of the book. Williamson’s chief aim is to evaluate the biblical data related to death, resurrection, judgment, hell, and heaven.

Williamson contends (chapter 2) that death, apart from being a ubiquitous reality across the ages and cultures, is diversely variegated. In the Old Testament (OT), death has little by way of positive connotation, though the continued existence of spirits is quite evident. The period between the testaments, notes Williamson, brought about more nuanced ideas related to death, being influenced largely by dualistic Greek anthropology (49). Matters in the New Testament (NT) are brought into sharper focus: death becomes a temporary separation between the physical and non-physical.

Chapters three and four examine resurrection and judgment, respectively. In general, ancient Near Eastern religions rejected any notion of a person being resurrected, let alone judged. Even in Greek philosophy, observes Williamson, resurrection was not a welcomed idea. The notion of bodily resurrection in Second Temple Literature clearly embraced such a concept (69). While future resurrection moved from more to less amorphous in the OT, the NT is robustly clear, forcefully defending a future (as opposed to immediate) resurrection of the dead.

The book closes with a chapter on hell and a chapter on heaven. Williamson surveys some passages related to the general idea of hell, noting that the concept becomes less vague as one transitions from the OT to the NT. With respect to the biblical concept of heaven, the author presents an exegetical defense of eternal existence in a re-created earth, taking the visions in Revelation as symbol-laden presentations of heaven.

Death and the Afterlife exemplifies true scholarship, being written for the academic and the layperson alike. The work exudes many strengths—four being particularly worthy of comment. First, Williamson’s prose makes the book a delight to read and easy to follow. The faithful churchgoer with little to no academic training will find himself engaged with the contents of this work, undoubtedly finding its flow and arguments rather accessible. The layout of the book presented in the table of contents allows readers to quickly take stock of what to expect from the author.

Second, the book is an exegetical tour de force. Readers would fare well to follow Williamson’s methodological approach. His arguments are steeped in biblical reasoning, being presented as the careful conclusions of a meticulous exegete. He engages well with divergent conclusions, never going on a theological limb. Rather, Williamson presents opposing arguments and analyzes their conclusions against the backdrop of the biblical data. He makes thorough use of the grammatical-historical method of interpretation.

Third, this work represents a rigorous undertaking in biblical theology. Williamson takes the theme of personal eschatology and judiciously presents a case based on how the biblical authors understood it. Thus, for example, the concept of death is first considered by the OT authors and then evaluated in the NT. What is more, Williamson observers the way the NT authors use and develop the OT authors’ understanding of a particular idea. While not inspired, the author includes copious references to Jewish intertestamental literature, serving to inform how the NT authors thought about certain topics. This is very helpful, particularly when seeking to do justice to the historical context within which the NT was composed.

Finally, the book deals fairly and honestly with opposing views. When presenting a conflicting perspective, Williamson is careful to articulate another’s position as originally put forward before engaging with it. Readers will be hard-pressed to find unsubstantiated or hasty generalizations by the author.

The five themes explored in this book (death, resurrection, judgment, hell, and heaven) are all proportionately presented—each theme is covered in roughly thirty pages. One wonders, however, assuming the total page limitation, whether some themes should have been discussed in more detail. Death, on the one hand, is a theological idea that seems to occupy a fairly large landscape of agreement among evangelicals and non-evangelicals. Hell, on the other hand, is hotly debated, even among evangelicals. Williamson’s dialogue with Edward Fudge helpfully highlights the reality of a non-traditional view of hell within confessional evangelical circles—a view gaining in popularity in the last few decades. Accordingly, then, the book could have dedicated some more time to a discussion of hell. As readers work through Williamson’s response to Fudge, they may be left wanting more, feeling as though the treatment was not sufficient.

Overall, students of biblical and theological studies will find this work beneficial as a model of how arguments in their field should be crafted. The main contents of the work should also be of valuable service to students. Williamson’s engagement with anthropological realities (most notably the idea of hell’s eternality vis-à-vis the human experience) fits with contemporary narratives that are at odds with the biblical data. In this way, the book helps students to be informed of competing arguments and how best to interact with them. 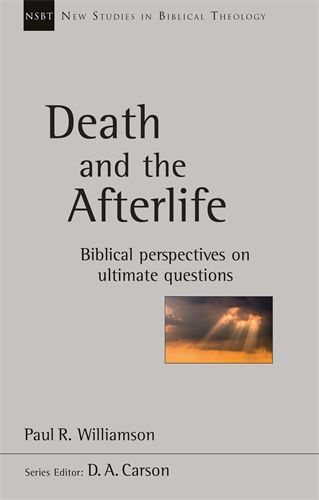