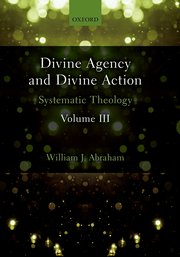 The third in a projected tetralogy, this volume sketches an entire systematics that follows a traditional credal structure. Abraham’s goal is to rescue Christian theology from the Procrustean constraints of an epistemological preoccupation with the problem of divine action. Recent projects, he claims, have worked with a “closed concept” which narrows the scope of God’s work attested in Scripture and tradition. This generates an impoverishment of theology with deleterious consequences for church practice. Prioritising the notion of God as “Agent” as opposed to “Being” or “Process”, Abraham seeks to offer an account of the range of divine activity (understood as an “open” concept) from creation to eschatology. His intent is to defend and develop the canonical traditions of the church as these emerged in the patristic period. Hence his account is resolutely Nicene and Chalcedonian in its approach, and largely impatient with modern projects such as that of Schleiermacher who is charged (perhaps mistakenly) with losing the doctrine of the Trinity (p. 10). For Abraham, systematic theology is a self-critical appropriation of the canonical teachings of the church directed towards spiritual formation (p. 32). What emerges is an unashamedly ecclesial exercise intended to serve church leaders as well as an academic audience.

This book is never dull. In a lively and engaging study, Abraham offers his readership a fair few surprises, many of these reflecting an appreciation of the Orthodox tradition allied to evangelical and Methodist leanings. So Symeon the New Theologian is frequently eulogised. Prayers for the dead are commended. Anthropomorphic descriptions of the divine are said to be more right than wrong. Feminine pronouns refer to the Holy Spirit. Miracles are accorded a central place, and not only for the apostolic commencement of the faith. Demonic possession and angelic guardianship are defended, while exorcism is advocated. The virgin birth is judged fitting and therefore true. The veneration of saints and icons is valid and useful. Messianic Jews make an indispensable contribution. Universalism is firmly rejected (though surely its leading Cappadocian exponent was Gregory of Nyssa and not Gregory of Nazianzus, p. 258). Each of the eighteen chapters offers insights and arguments that repay serious study—the present reviewer has profitably worked through the text with a group of graduate students. Of particular note are the clear and productive treatments of creation, providence, anthropology, and the balanced remarks on divine grace and human freedom. These loci admirably reflect Abraham’s capacity to combine his expertise as an analytic philosopher with his commitment to theological education.

Yet, notwithstanding its many merits, the book also raises some critical questions. I shall concentrate on three of these.

First, one might ask how well this work fulfils its intended function of providing a one-volume systematics accessible to the wider church. There is frequent use of extensive quotation, while too many allusions and footnote references seem to assume prior in-depth knowledge of the field. This applies also to many of Abraham’s quips which are actually very good, but likely to be lost on the intended audience. How many of them are already aware of open theism or the John Templeton Foundation which I take to be the intended referents of the remarks at pp. 144–145? Swipes at the Jesus Seminar and other targets also add to the piquant flavour of the study but again one wonders if these assume too much on the part of the imagined readership.

Second, the way in which the ‘canonical’ tradition is used to frame the content of the study raises some material difficulties in my mind. In particular, the concentration on a narrative of human predicament and divine solution often feels too restrictive. A few examples may suffice. The classical doctrine of the Trinity is elegantly defended by showing that it improved upon the deficient alternatives of modalism, subordinationism, and tritheism. But one wonders if the seeming attractions of modalism for a contemporary audience are really recognised or if the uncertainty surrounding the person of the Spirit until the second half of the fourth century is fully registered. Is the patristic tradition as unilinear as seems to be suggested? With respect to Christology, little attention is given to the life of Jesus as narrated in the synoptic gospels. As in the classical creeds, we move too swiftly from birth to death, while in Abraham’s ‘expressivist-cognitivist’ approach to the atonement, which some will regard as a disguised subjective theory, there is almost no reference to the resurrection. The two-natures formula is robustly defended with reference to the ecumenical councils, yet modern anxieties around Chalcedon (many of these borne of pastoral concerns about the loss of Christ’s humanity) are not properly ventilated. These have been with us for more than two centuries and cannot easily be ignored, especially given the ways in which the Fourth Gospel must now be read. The discussion of the work of the Spirit focusses on the church and the Christian life, but despite what is said earlier regarding the person of the Spirit as divine energy and force there is insufficient reflection on its broader manifestations in nature and history. His account of creation has the potential to move beyond an ecclesial anthropocentrism in a richer and more variegated study of the goodness of the natural world, ecological balance, the diversity of species, the benefits of civil society, and the riches of art, science and religion. Yet, despite occasional gestures, these are mostly neglected themes as we move swiftly from creation to salvation. The overall result is again a narrowing of theological focus within a traditional scheme reflecting a classical credal pattern of sin, redemption, and eschatology. A further consequence is the lack of any attention to the theological significance of other faiths—the exception is Judaism, where one wonders if the phenomenon of Messianic Judaism can provide the bridgehead he intends. Abraham may well face some or all of these issues in the fourth volume to which I look forward, but judged as a stand-alone contemporary systematics there are some obvious lacunae here.

Third, there may be a further factor present in all of this. Much of the volume appears to be informed by a fear that theology (and church) are in danger of being instrumentalised by liberationist projects that subordinate the work of God to cultural criticism. Although largely undeclared, one suspects that this anxiety results in a deliberate refocusing of systematic theology as an ecclesial project. This seems to me a welcome corrective, but it results at times in a lack of developed ethical reflection. Admittedly, socio-political concerns appear sporadically, for example in his defence of democracy (p. 166) and especially in his stirring conclusion (p. 275), but these could have been foregrounded earlier for the sake of comprehension and balance.

Nevertheless, this is an important four-volume venture, and I salute Abraham’s intention in this third part to overcome the growing chasm between church and university. His insistence upon a more open concept of divine action seems well made to me, with the resultant emphasis upon God as ‘Agent’ restoring a more Scripturally inflected account of the divine economy. On a personal note, I regret not having the benefit of learning from Abraham’s work while writing a recent monograph on providence. Perhaps it takes someone with his philosophical acumen to challenge distortive if beguiling approaches to divine action, and thus to release systematic theology from philosophical captivity. For this and much else, we can be grateful to him.