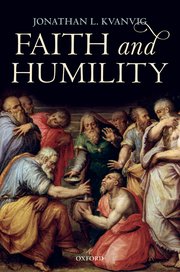 Jonathan L. Kvanvig is Professor of Philosophy at Washington University-St. Louis. This particular monograph came out of a project funded by the Templeton Religion Trust and the contents of Kvanvig’s Wilde Lectures, delivered at Oxford University in the spring of 2017. His work in philosophical theology expands far beyond the topics of faith and humility and includes questions of heaven and hell, a defense of Philosophical Arminianism as an alternative to Molinist accounts of divine providence, and serious reflection on the nature and possibility of omniscience. And, lest anyone might wonder what my own view of the merits of this book might be: it is excellent and a must-read for anyone working in philosophical theology.

In Faith and Humility, Kvanvig first argues that faith fundamentally is a disposition in service of an ideal (i.e., a functional account of the nature of faith that allows for a wide range of cognitive and affective components). Second, he argues that the best construal of the nature of humility is as a virtue of attention, where one possesses humility insofar as one possesses the excellence of attending to oneself no more than is reasonable. And then finally, Kvanvig argues that his other-centric construal of faith functions well as a balancing virtue with humility, where balancing virtues are (roughly) a complementary set of virtues, such that the possession of one virtue is enhanced, made easier, or rendered more likely by the possession of its complement.

Whenever Kvanvig writes something, it is worth paying attention; this is because whatever he has to say will be argued carefully with wonderfully didactic prose. This book is no different. He begins by articulating a particular methodology, which reemerges at various points throughout the book, namely, that what is fundamental to a concept might not be necessary and sufficient to that concept. This methodological conclusion helps advance Kvanvig’s critique of the various accounts of the nature of faith, where even if he identifies something which is, strictly-speaking, a necessary constituent of faith, he can argue that it fails to be fundamental. Thus, although Kvanvig understands faith to carry with it some cognitive element or other, the cognitive component is not what fundamentally makes faith important. Similarly, it is not necessarily the non-cognitive components that are fundamental to faith either; rather, what is fundamental is the way in which one has ordered one’s life around an ideal (i.e., the functional account of faith).

It is worth making a few critical observations concerning the organization of Faith and Humility before moving on to a more substantive engagement with its contents. The book is divided into two sections that are dedicated respectively to faith and, subsequently, humility. While the section on faith is well-organized and connected in clear ways, the chapters contained in the humility section are less so. In particular, the humility chapters appear as if they once were independent papers that have been conjoined in an attempt to fill out an otherwise very brief section on the nature of humility. This is unfortunate; it would have been good to hear much more about humility on its own before turning to its connection to faith. Second, at a few points in the book, Kvanvig appears to take on a straw-man as his interlocutor. This is especially apparent in his third chapter, on cognitive accounts of the nature of faith. His primary interlocutor in that chapter appears to endorse a doxastic view of faith (as opposed to the more broadly construed cognitive family of views) where faith requires belief-that something or other is the case. Undoubtedly, there are plenty of fundamentalist Christians for whom such an understanding of faith might be close to accurate, but it seems to me that they would be unlikely to make the sorts of clear distinctions between beliefs and other cognitive states that Kvanvig (admirably) highlights throughout his text. Thus, in this place and others, a clear identification of Kvanvig’s opponents would have been helpful to the reader.

Concerning the particular contents of the book, I found myself largely agreeing with Kvanvig’s treatment of both the nature of faith and humility. One area of discussion that seems unfinished, however, is in Kvanvig’s understanding of how to go about identifying the precise object of one’s faith (i.e., the ideal towards which one’s life is oriented). For illustration, Kvanvig writes that democracy or equal opportunity might serve as an ideal, but it is not the concepts which serve as ideals (p. 112). Rather, it is the instantiation of such concepts that serve as an ideal, an ideal that might be highly valuable even if it might never be fully satisfied. Faith in such possible states of affairs, however, is a different thing from faith in God, who is a person as opposed to an ideal of some sort. Thus, one is left wondering what faith in God might amount to? Is faith in God a disposition in service of realizing the state of affairs of Christ’s reign? Perhaps it is instead a disposition to be obedient to the commands and teachings of God (as Kvanvig’s discussion of James indicates, pp. 115-120). However, both of these objects seem reasonable as objects of faith in God based on Kvanvig’s discussion of the matter; but it seems that one might in principle be disposed to realizing Christ’s reign without being disposed to submit to it oneself. If so, then we have two competing possibilities for the proper object of Christian faith (and presumably more besides). A bit of disambiguation would be helpful.

A more central concern with Kvanvig’s book surrounds his assumption that faith is best construed as a virtue. Now, I actually share this view, but I am not satisfied with Kvanvig’s defense of that claim. The closest to an argument I can find in support of this claim is: (i) we should order our inquiry towards an understanding of faith most worth having; (ii) the understanding of faith most worth having construes faith as a virtue; therefore, (iii) we should order our inquiry towards faith construed as a virtue. Many of the alternative views Kvanvig considers in the book would likely reject (ii) in the above argument. Rather, they would claim that their alternative cognitive or non-cognitive views of faith, at least in a biblical or Christian context, are more valuable all-things-considered in virtue of their immeasurably high practical value (i.e., since having their type of faith supposedly brings salvation along with it). This lacuna at the motivational center of Kvanvig’s project is unfortunate; nevertheless, the resulting work is an astounding work of erudition.

For the student of biblical and theological studies, careful attention should be dedicated to the taxonomy of positions of faith clearly delineated by Kvanvig in chapters 2-5. Keeping straight the difference between cognitive, doxastic, non-cognitive, preference-based, and functional accounts of faith would help the reader to think critically about their own understanding of faith. Moreover, this book can be read in conjunction with Matthew Bates, Salvation by Allegiance Alone (Grand Rapids, MI: Baker Academic, 2017), which defends a very similar account of the nature of faith from a biblical scholar’s perspective.