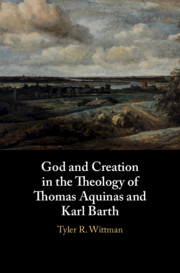 Tyler R. Wittman is an Assistant Professor of Theology at New Orleans Baptist Theological Seminary in New Orleans, LA. Before his appointment at NOBTS, Dr. Wittman was an Assistant Professor of Christian Theology at The Southern Baptist Theological Seminary in Louisville, Kentucky. Dr. Wittman completed his dissertation, entitled Confessing God as God: Thomas Aquinas and Karl Barth on Theology and Economy, at the University of St Andrews in 2016 under the supervision of the late John Webster. His published work generally focuses on various aspects of trinitarian theology throughout the medieval scholastic and Reformed traditions.

Dr. Wittman’s God and Creation in the Theology of Thomas Aquinas and Karl Barth, an updated version of his doctoral dissertation, examines how best to understand and correlate God’s nature and works, or theology and economy, respectively, so as to uphold the distinction between the Creator and creation (p. 11). Through a comparative and constructive retrieval of the theologies of Thomas Aquinas and Karl Barth, Wittman seeks to elucidate this distinction in two complementary ways, which he introduces in the first chapter: “first, that theology exhibit how God’s perfection does not require his relation to creation; second, that theology depict the intelligibility of God’s perfection in himself in such a way that licenses the claim that God would be God in undiminished perfection and goodness without creation” (p. 12). Beginning his retrieval of Aquinas in Chapter 2, Wittman describes Aquinas’s conception of God’s life as his eternal blessedness, “which grounds a circular construal of divine movement and activity that is primarily ordered to God in himself and secondarily to creatures” (p. 28). Chapter 3 correlates the circular divine movement of God’s life in se to God’s works in creation by describing the mixed relation that obtains between God and creation.

The following three chapters establish how Barth arrives at a revised “real” relation between God and creation through his theology of God’s self-determination in Christ. Chapter 4 describes Barth’s understanding of theological actuality, drawing together the nature of God’s love, freedom, and “faithfulness” (p. 171). Chapter 5 explores how Barth reorients doctrines such as divine simplicity and uniqueness because of his underlying concern for the mode of theological predication. In Chapter 6, the final chapter on Barth’s own theology, Wittman roots Barth’s correlation of theology and economy in his Christological doctrine of election.

Chapter 7 brings these two historical accounts together, comparing Wittman’s findings in the previous chapters to generate constructive suggestions concerning the relationship between theology and economy. This concluding chapter argues that an account that grounds the distinction between God and creation in an account of God’s perfect life in himself rather than in a self-determining decision is more capable of undergirding the church’s confession of God as God in all his works.

Wittman’s book is an erudite discussion of several consistently difficult concepts in contemporary systematic theology, including theological actuality, the nature of divine action, and the role of metaphysics in theological methodology. The main strength of the book is how Wittman keeps these concepts in view throughout the course of the study and carefully develops them from different angles. The prime example of this is the development of the concept of actuality through Wittman’s discussions of Aquinas and Barth. Wittman argues that Aquinas views God’s actuality as his plenitude of life in himself that allows for his activity in creation, whereas Barth construes actuality as a result or totality of God’s nature and works. This difference illustrates the need to specify the logical relationship between God’s acts and his inner perfection. For Wittman, this relationship must allow God’s acts to be logically reducible to his perfection (pp. 283–84). On this understanding, then, Barth’s understanding of actuality undermines his ability to maintain that God’s perfection is intelligible apart from any reference to creatures. On the other hand, an account similar to Aquinas’s, wherein actuality is understood as an “originating fullness” that also functions as the principle of all of God’s economic acts, provides the basis upon which to confess God as God both in himself and in his acts in creation. This culminates in Wittman’s most incisive suggestion, which is a critique of modern theologies that fail to “specify God’s perfection as something logically antecedent to and intelligible without God’s outgoing immanent operations,” namely, that “it becomes difficult, if not impossible” to demonstrate that creatures do not in some way contribute to God’s perfection (p. 284).

Actuality is only one example of the many nuanced discussions that are intertwined throughout the historical retrieval and brought to fruition in the final chapter. Others include the relation between being and activity, the nature of God’s self-determination, and the role of nominalism and theological predication. In addition to this, Wittman shows a rare attunement to the connection between Christian ethics and the theological method of the two theologians, discussing at length the effect their understanding of pride had on their methodology (see, for example, page p. 62).

While the project’s limited scope allows for sustained depth on the topics mentioned above, it also leads to a handful of instances where more context or argumentation might have been helpful to the overall argument. For instance, there are places where a reader might wish that Wittman engages more directly with the scholarship surrounding the topics that he addresses. This is especially true in the last chapter, where many of Wittman’s suggestions implicitly challenge large portions of contemporary Barthian scholarship. While this is likely due to limitations both of space and focus, it does make it difficult for anyone except topic experts to place Wittman’s reading of both Aquinas and Barth among the existing literature.

Another omission concerns the historical contexts of each theologian. For example, while demonstrating the logical similarities in how Hegel and Barth conceptualize actuality, Wittman makes it clear that he is not attempting to draw genetic similarities but is only heuristically comparing them. While this is certainly a more conservative and economical approach, it leaves unspecified the generally modern commitments that lead a theologian to understand actuality as ‘resultant’ and why these commitments differ so significantly from those of Aquinas. Though this is likely due to the scope of Wittman’s work, this omission represents a lacuna of historical explanation that might have been somewhat filled in various sections by a handful of footnotes.

Wittman’s book, while highly technical and at points quite dense, provides an excellent example of how historical retrieval, attention to the biblical text, and contemporary theological concerns might continue to intersect in theological literature. When working through this volume, the reader should remain attentive to the themes of divine actuality, the relationship between being and act, and the effects of the methodological commitments of each theologian. While this book is not well-suited undergraduates in their first few years, advanced students and scholars interested in the current research around the relation between the Creator and creation will benefit from Wittman’s careful analysis and suggestions.