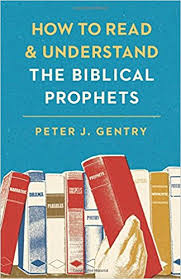 How to Read & Understand the Biblical Prophets is a student oriented look at the unique hermeneutical issues at hand when interpreting the prophets of the Old Testament. Author Peter J. Gentry (PhD, University of Toronto) is the Donald L. Williams professor of Old Testament Interpretation at South Baptist Theological Seminary and director of the Hexapla Institute. His other academic works include Kingdom Through Covenant (Crossway, 2012). His expertise is clearly at the fore as he seeks here to make the prophets, major books of the Old Testament, approachable to the Christian student. How to Read & Understand The Biblical Prophets achieves in every way its titled purpose, and is an introductory work of the highest order.

Gentry sets out with a clear goal through How to Read. His stated purpose is to define seven central characteristics of prophetic literature that are vital for understanding. By understanding these prophetic literature characteristics, Gentry hopes that they “will help Christians comprehend these texts for themselves, perhaps for the first time with real understanding” (p. 14). Each of the characteristics of prophetic literature that Gentry outlines corresponds to a chapter of the book. Starting first, He shows that prophets seek to call the people back to covenant loyalty. To Gentry, this is “the first and perhaps most important… message of the biblical prophets” (p. 30). Second, prophets speak to judgment and restoration of the people. This is where Gentry classifies predictive prophecy in his work; it is given to call Israel to account for covenant disloyalty. Third, Gentry focuses on the use of repetition as marking emphasis in the writing of the prophets. Fourth, he examines how prophets speak to foreign nations in order to emphasize God’s sovereignty over them. Fifth, the book examines the use of typology and the eschatological idea of the New Exodus within the prophetic corpus. Sixth, Gentry seeks to provide the basis for understanding apocalyptic writing as being focused giving meaning over details. Lastly, the tension between the already and not yet of prophetic prophecy and writing is discussed with an eye towards meaning for modern application. The book closes with brief concluding thoughts from Gentry and an appendix on the “Literary Structure of the Book of Revelation” (pp. 125ff). Through all this, Gentry hopes that his readers will “consciously apply these principles” as they read from the Old Testament prophets (p. 124).

Gentry’s work excels in several key ways. Foremost of his successes is the crafting of a book that, simultaneously, is both scholarly and approachable. Gentry is able to include scholastic understanding and exegeting of the texts he engages with. He traces: thematic developments within a corpus, e.g. the theme of New Exodus in Isaiah (p. 79-80), the use of chiasm as a literary device (p. 47), and ancient Near Eastern metaphors as used in the text, e.g. creation and un-creation motifs in Jeremiah (pp. 102-5). While engaging in these discussions, however, Gentry does not lose the pastor or undergraduate reader. Several stylistic choices aid him here. He intentionally avoids putting Hebrew in the book either transliterated or raw. Likewise, his choice of grammar and terminology will not leave many behind. Jargon and technical terminology are used sparingly and always with ample definition. Any student with a cursory knowledge of biblical studies will be able to follow Gentry’s arguments throughout.

Also worthy of special note is Gentry’s chapter on apocalyptic literature. His description of precisely how apocalyptic literature works is phenomenal and perhaps worth the price of admission alone. Gentry employs an example of a traffic accident, and shows in concrete fashion how apocalyptic language works by describing an event in terms of its meaning rather than form (p. 101). This illustration, fortified with a quote from N.T. Wright on the matter, takes apocalypse from an esoteric and mysterious genre to one that the student may begin to understand. This concrete, non-sensational approach to the text will serve new students and set them up for success as they advance in their hermeneutical knowledge and study.

Only one item from the book stands out as being out of place. In the sole appendix to the work, Gentry includes a short chapter and then an illustration from Andrew Fountain on the literary structure of the book of Revelation (pp. 125-132). While the material is well done, its inclusion in this book is anomalous. Certainly, a better understanding of the prophets can lead to a better understanding of other works, and clearly apocalyptic literature is discussed in this book. These facts, however, do not make a clear case as to why this appendix belongs here. Gentry seems to have landed on an unsatisfactory middle point with this inclusion. If the book wishes to tie the prophets to eschatology in Revelation, then it should embrace that goal and devote more time and space to that study. If, however, the book only seeks to better understand the prophets, then this addition is counterproductive and not germane to its purpose. The book would be better served by either dropping the appendix or expanding it fully into the purpose of the book.

How to Read & Understand the Biblical Prophets seeks to introduce Christian readers to the wonder and knowledge found within the prophetic corpus of the Old Testament. Peter Gentry brings brilliant scholarship to the table in a winsome and engageable manner. This book is best suited for the undergraduate Christian student or pastor seeking to sharpen and deepen their knowledge. This work would be well used as an undergraduate text for specific hermeneutical issues within the prophets. It can serve as an excellent introduction and gateway to further study. Masters students and those beyond should seek more comprehensive works on the subject, although it may retain some benefit as a quick refresher. Peter Gentry himself suggests Aaron Chalmers work, Interpreting the Prophets: Reading, Understanding, and Preaching from the Worlds of the Prophets (IVP, 2015) as a more academic work in a similar vein (p. 123). Altogether, Gentry’s present work is a resounding success that should open up the prophets to many students going forward. Any eager new student of the prophets will be well served by engaging with this work.