Bekins, Peter. Inscriptions from the World of the Bible: A Reader and Introduction to Old Northwest Semitic. Peabody, MA: Hendrickson Academic, 2020, pp 300, $79.95, hardback. 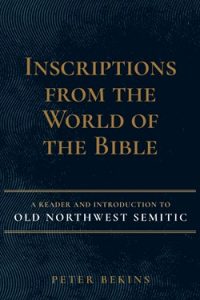 If you know Biblical Hebrew, then you essentially know ancient Edomite, Moabite, Ammonite, and Phoenician. You can add those to your résumé. They are all basically the same language. The differences among them are rather minor. For example, the direct object marker in Hebrew and Moabite is ’t (aleph-tau), whereas in Phoenician (and Aramaic) it is ’yt (aleph-yodh-tau). A modern analogy might be English spoken in London, New York, Minnesota, and Georgia. Moreover, if you know Biblical Hebrew, then you are well on your way to a knowledge of Aramaic.

We should not think of Biblical Hebrew as a completely unique language all alone, as if it were per se a holy language. It was part of the common language spoken throughout the area of ancient Syria and Palestine. It was, you might say, part of the lingua franca of that area, much like the Koine Greek of the New Testament in the Greco-Roman world. There is a theological message here. The Creator chose to communicate with his human creatures in an everyday language, the kind of language spoken by everyday people at that time and place. He is not some secretive god with a mysterious code accessible to only a few cognoscenti. He is the transparent God who communicates in human language that is readily understandable.

The linguistic label for this language-group is Old Northwest Semitic. It consists of four major sub-languages: Phoenician, Hebrew, Moabite, and Aramaic. Peter Bekins has taught advanced Biblical Hebrew and Northwest Semitics at Hebrew Union College—Jewish Institute of Religion. With this textbook he provides a reliable, accessible, and well-organized introduction to old Northwest Semitic. Part I of the volume introduces students to old Northwest Semitic languages and their grammar, including phonology, morphology, and syntax. Part II then offers readings selected from Northwest Semitic inscriptions that date to the time of ancient Israel’s monarchy, basically from the time of King David (about the year 1000) to the Babylonian exile (the year 587). For each language Bekins provides the student with the text, explanatory notes on the words, a translation, and a glossary. The languages are: Old Phoenician, Old Hebrew, Moabite, and Old Aramaic. He treats separately texts from Deir Alla (east of the Jordan River north of Ammon and Moab) and the ancient kingdom of Samal (northern Syria) because of their distinctive linguistic features. At the end of the volume he includes a helpful bibliography.

Bekins made good choices with his selection of inscriptions. Each inscription has enough lines that the student can get the feel for the language. Several of the inscriptions have biblical connections. For example, a Hebrew inscription dated about the year 600 found at Ketef Hinnom near Jerusalem repeats the first two lines of the Aaronic benediction. Hebrew inscriptions from Kuntillet Ajrud in northern Sinai offer a blessing “by Yahweh and by his Asherah” (a goddess), giving evidence of the kind of syncretism condemned by the biblical authors. The Mesha inscription (Moabite Stone) correlates with 2 Kings 3. The Deir Alla inscriptions dated about 800-750 give a prophetic vision by Balaam son of Beor (compare Numbers 22-24). And there are other connections.

I highly recommend this book for students who have had beginning Hebrew. Knowledge of Biblical Aramaic is also helpful. Bekins does a great job of leading students into the fascinating world of inscriptions. The book will enable them to understand Biblical Hebrew and Aramaic in their linguistic context of old Northwest Semitic. As a side benefit, they can then impress their family and friends that they know Moabite. 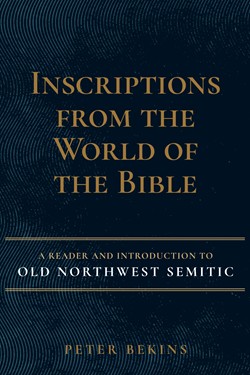