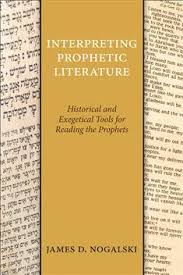 James Nogalski (Dr. Theol., University of Zürich) is Professor and Director of Graduate Studies in Religion at Baylor University in Waco, Texas. Nogalski has written extensively on prophetic literature with works such as his two volume commentary The Book of the Twelve (Smyth and Helwys, 2011) and Literary Precursors to the Book of the Twelve (De Gruyter, 1993). Moreover, Nogalski has translated four books into English from German which include Old Testament Exegesis: A Guide to the Methodology (Scholars Press, 1998) and The Theological Witness of Prophetic Books (Chalice Press, 2000).

In Interpreting Prophetic Literature Nogalski sets out to write a primer on prophetic literature which is accessible to a novice student. Nogalski’s introduction is unique in that he shifts his focus away from historical backgrounds, which is normally the locus of the prophetic section in introductions, and instead pivots his book in order, “to [supplement] such introductions by focusing upon the art of reading prophetic literature” (p. 2). Nogalski accomplishes this by examining the different formulae of oracles, defining the key places and people, exhibiting contextual analysis, indicating theological themes, and developing a hermeneutical approach for modern day application.

Nogalski wants to correct the two main shortcomings of other exegetical introductions, namely that they assume a working knowledge of Hebrew and focus on the exegetical methodology of narrative literature. Most introductions downplay prophetic speeches, forms, and collections, which results in “[a] struggle to understand the poetry and the rhetorical logic of smaller and larger units within the prophetic writings” (p. 1). Nogalski overcomes this struggle and fills the gap in many ways. In chapter 2 Nogalski familiarizes his reader with the exegetical tools associated with rhetorical analysis in the prophetic texts. By the end of the chapter, the reader is able to delineate textual units based upon the recognition of: a) formulaic markers that begin and end oracles, b) shifts in the speaker and audience of oracles, and c) the four types of literary parallelism (synonymous, antithetical, stair-step, and chiastic).

Chapter 3 covers the key places, people, and terms found in prophetic literature. This section is the heaviest on historical backgrounds; however, more is done in explaining each concept within their greater associative and theological framework. An example is Nineveh’s use as a hyperbolic symbol for all evildoers instead of solely functioning as a geographical location in Jonah.

Chapter 4 contains a list of different oracle and narrative forms that are the most common in prophetic literature. As in the previous sections, Nogalski’s brief statements are seen as a gateway into the larger world of prophetic literature studies. His supplemental model for this book allows him to introduce concisely major literary forms and to provide expectations when a student reads more in-depth work on specific prophetic sections.

In chapter 5 Nogalski creates a break in the methodology of studying small units and establishes his analytical method for observing the contextual relationships between the individual units detected from the tools in chapters 1-4. Although categorized a bit differently, the various ruminations on formulae, theological themes, and metaphors observed in the smaller units work in similar ways to the larger strategy of the prophetic books. The final section is a case study on the composition of Amos, and the interpretive methods used by the final redactor/s to place the four major sections of the book in their present form.

Nogalski’s penultimate chapter contains the various nuances in the two major themes found in prophetic literature: judgment and hope. First, the causes for judgment on both the nations of Israel and Judah and on other, foreign nations are categorized under issues in social justice, ethical violations, and covenant breaking. Second, the hope offered after judgment is organized by the themes of physical and political restoration, covenant renewal, and cultic revitalization.

The final chapter is designed to orient the reader toward the important process of hermeneutics. Although concise, Nogalski’s section on adapting the prophetic text contains thoughtful pastoral concerns. The author’s hermeneutical approach begins with a pastor or teacher properly communicating original context, applicable theology, and contemporary analogies. For Nogalski teaching and applying the prophetic text is risky; however, the greater risk is avoiding the applicable message of the biblical prophets and “losing the ability to speak boldly to issues of importance for both the community of faith and the culture at large” (p. 122).

Interpreting Prophetic Literature distinguishes itself from other exegetical textbooks in that it successfully supplements introductions that focus on historical backgrounds and provides his audience access to the interpretation of the prophetic texts without any knowledge of biblical Hebrew. This book is best used in an upper level undergraduate classroom along with a textbook in historical backgrounds, or at the graduate level along with a technical commentary. Moreover, Interpreting Prophetic Literature is so accessible that pastors could use this with their congregations in Sunday school or Bible study settings as an introduction to interpreting prophetic literature.