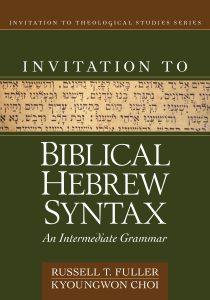 Building upon the foundation laid in Invitation to Biblical Hebrew: A Beginning Grammar, Russell Fuller and Kyoungwon Choi present an intermediate grammar which leads students of Biblical Hebrew (BH) towards internalization and mastery. The text is unique among similar intermediate grammars in its use of traditional Arabic/Semitic linguistic categories and pedagogy, while ignoring modern linguistic jargon.  Most directly stated, this means analysis presented from linguistic scholars like Elizabeth Robar, Jan Joosten, T. Muraoka, Cynthia Miller-Naudé, and others is not incorporated in favor of traditional Semitic analysis.  This makes the text accessible to most intermediate students, yet confusing for those who have been exposed to the more modern syntactical terminology.

Invitation to Biblical Hebrew Syntax: An Intermediate Grammar is divided into three sections, each working together using the pedagogical method put forward in the introduction.  The first main section is titled “Syntax” and consists of grammatical explanations and categories with examples throughout.  Each chapter ends with extensive exercise questions to reinforce the concepts, as well as drills for identifying grammatical categories and constructions from the Hebrew Bible. A detailed answer key is provided at the back of the book with full explanations which carefully incorporate the chapter’s material to further help students master the syntax. This section of the text book utilizes passive learning as students learn the material through memorization and apply it through observation.

The next major section entitled, “The Compositions,” ingrains the grammatical and syntactical principles from the “Syntax” into the student through the traditional recitation method of learning classical languages.  Fuller and Choi provide a four-step process for using the compositions (p. 245).  This process includes (1) composing the Hebrew text from the English text with detailed footnotes that reference sections of the syntax, (2) correcting the composition with the answer key, (3) mastering the Hebrew text, and (4) reciting the Hebrew text out loud using only the English text.  The first nine compositions are written by Dr. Fuller using BH syntax, vocabulary, and stories while the final three are poetic texts from the Hebrew Bible.

The final section focuses on the Masoretic accents.  Fuller and Choi begin by putting forward the value of the accents as well as their importance since, according to them, the accents “reflect the divinely inspired text” (p. 352) in their vocalization and chanting or they at least “represent an ancient rabbinic interpretation of Scripture, an invaluable resource for syntax and exegesis” (p. 352).  This is followed by a detailed examination of how the entire accent system works by dividing them into a hierarchy and pointing out their patterns in BH prose and poetry.  This is followed by a commentary on the accents in composition seven and Psalm 1.

The greatest strength of Invitation to Biblical Hebrew Syntax is found in the compositions, yet this is largely because of their dependence upon and interaction with the syntax/grammar section.  When the passive learning found in the first part of the book is combined with the active use of these principles in the compositions, a mastery of BH results that is unparalleled in other methods of learning ancient languages.  Reciting the compositions force the learner to think through the vocabulary, morphology, and syntax actively, speeding up the process of internalization.  This process is still unbelievably difficult and time consuming, yet it is also enjoyable, rewarding, and powerful.  Upon mastering the syntactical principles and applying them in the compositions using the footnotes, students will find reading the Hebrew Bible more enjoyable, less confusing, and more natural.

The Hebrew accent section of the textbook has also been widely praised, and for good reason. Fuller and Choi have presented the accent system in a way that new students can learn efficiently yet with a detail and rigor that experienced scholars and translators are likely to benefit from as well.  Fuller displays his thorough grasp of the Masoretic system with this chapter as he puts his decades of research and experience on display.  At the same time, it must be stated that Fuller’s view that the Masoretic tradition is “inspired as accurately preserving Ezra’s inspired text, allowing for an isolated copyist mistake and/or a rare lapse in the tradition” is a minority position (p. 352).  To be sure, the Masoretic accents, especially the vowels, should be considered an accurate preservation of the Jewish cantillation tradition going back quite a long time, possibly as far as the time of Ezra.  Still, some room must be left for emendations when manuscript and legitimate principles of textual criticism warrants it, something Fuller appears to generally reject in favor of a practically inspired Masoretic text.

Another strength to this textbook is also one of its more important disadvantages.  The text avoids categories and terminology from modern linguistics that can create a burden for students.  From start to end, the Syntax section uses simple terminology and defines terms and categories with examples.  Every term and category provided has a purpose and connects with BH directly.  Fuller’s approach and terminology is, according to the introduction, based on medieval Arabic grammar and Semitic terminology (p. 11).  The grammar prefers these grammatical categories while completely disregarding modern linguistics.  The advantage here is, upon mastering the text, readers will truly understand the language, the categories native to the language, and the way the language works.

The disadvantage to this approach, however, is largely found in moving beyond intermediate Hebrew studies and in utilizing a wider range of BH resources.  Picking up and reading a volume from, for example, the Baylor Handbook series, may pose a challenge.  The reason for this is that many of the categories being utilized within modern scholarship are disregarded by Fuller and Choi. This should not lead to the conclusion that Invitation to Biblical Hebrew Syntax is inaccurate or a bad textbook because it rejects the use of non-Semitic linguistic phenomena to analyze BH.  The textbook’s lack of modern-linguistics is one of its strengths, yet students utilizing the textbook must understand the drawback found in mastering some terminology and ideas which are no longer used in the wider scholarship of BH.

In utilizing passive learning of the Syntax section, active learning in the Compositions, and an excellent analysis of the accent system, Fuller and Choi have done a massive service to those seeking mastery in BH. Faithfully laboring in all three of these sections is sure to challenge and progress students of the Hebrew Bible. After this, those desiring further proficiency may want to pick up the reference/syntax grammars from van der Merwe/Naudé, Waltke/O’Connor and/or Joüon/Muraoka to understand the different approaches used to discuss and describe BH. 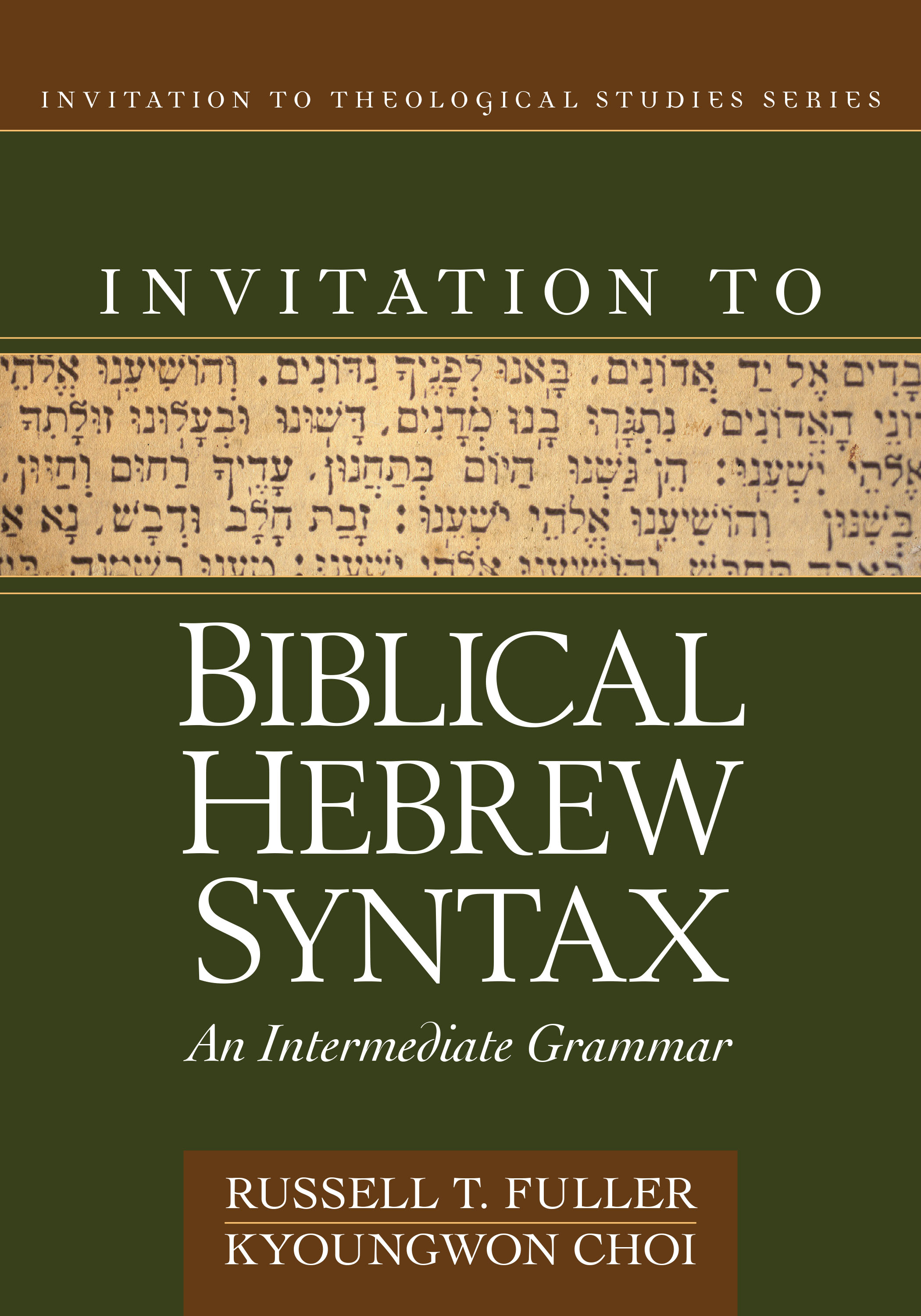