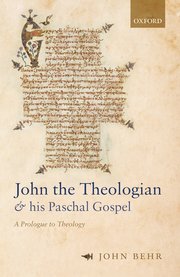 Fr John Behr is The Father Georges Florovsky Distinguished Professor of Patristics at St Vladimir’s Orthodox Theological Seminary in Yonkers, NY. In the Fall of 2020 he will be transitioning to a new position at the University of Aberdeen in Scotland. Fr Behr is a widely published and well-respected theologian in both Eastern and Western Christian traditions. John the Theologian & His Paschal Gospel: A Prologue to Theology is Behr’s most recent and comprehensive book on theology proper and his only book on the Fourth Gospel. In the book Behr argues that the “Incarnation should be understood not as a past event, but as the ongoing embodiment of God in those who follow Christ” (p. viii).

Behr begins the Introduction by questioning modern assumptions and theological methods that lead much of modern theological scholarship to understanding “Incarnation” as “the assumption [ἀνάληψις] of human nature by a divine person, as ‘an episode in a biography’, such that we can see God in the world in the particular forms or identifying marks of his human body” (p. 29). He argues that this understanding of “Incarnation” is not how the earliest theologians understood the term (p. 11). Rather, such an understanding, rooted in a particular understanding of the “pre-existent Christ” or “pre-existent Word,” is the result of later theological reflection and systematizing combined with an historically-focused way of reading ancient texts (pp. 13–14, 18–19, 40, cf. 247). As a result of this new theological method, “the very subject of Christian theology has changed from Jesus Christ, the crucified and risen Lord proclaimed by the Gospel to the narrative of the Word of God, treated first as ‘pre-incarnate’ … or as ‘asarkos’, ‘fleshless’ … who then, later, becomes enfleshed, for the next phase of his biography” (p. 15–16). This change in subject is precisely what he addresses and challenges throughout the rest of the book viewed through the lens of the Fourth Gospel.

Part 1 of Behr’s book first examines the author of the Fourth Gospel and then the nature of the Gospel itself. In his first chapter (“John the Evangelist”) Behr concludes that the author of the Fourth Gospel was John the Elder—not the son of Zebedee seen in the Synoptics—who was also the former High Priest of Jerusalem organizing what Lightfoot called “the school of John” and first established the paschal tradition.

Continuing in an historical key, Behr’s second chapter (“The Paschal Gospel”) explores the nature of the Gospel by uncovering the apocalyptic threads woven into its fabric—threads likely taken from John’s Apocalypse, which, as Behr argues, was written prior to the Gospel. Behr argues that whereas John’s Apocalypse “unveils,” John’s Gospel “‘veils’ that which is unveiled in the Apocalypse,” namely “the ultimate victory of God in Christ in the form of a narrative of Jesus and his apparent defeat ” (p. 111). And so, the veiling of God’s victory through the Word’s becoming flesh in his ascent to the cross proves itself to be “the apocalyptic, unveiling event par excellence” (p. 114).

Part 2 focuses on the passion of Christ in the Gospel. In chapter 3 (“The Temple of His Body”), Behr explores how John progressively portrays Christ as the fulfillment of the Jewish Temple and feasts (p. 138), demonstrating that temple imagery in the Gospel refers to the temple of Christ’s body. In his exegesis of John 6, wherein the third feast in the Gospel is found (p. 148), Behr argues that Jesus, in a trans-temporal moment, descends as the Son of Man by ascending to the cross thereby offering his flesh as the descending bread of heaven to be received in the Eucharist (p. 160).

In chapter 4 (“Behold the Human Being”), Behr, in order to shed light on the text of the Gospel, looks at three main figures in John’s school: John’s own Apocalypse, Ignatius, Irenaeus, and Melito of Sardis. Behr ultimately concludes that Christ becomes the living human being (ὁ ἄνθρωπος), both flesh and Spirit, in his self-offertory ascent to the cross (p. 216).

Chapter 5 (“The Prologue as a Paschal Hymn”) is quite provocative—if the first four chapters haven’t yet proved such for the reader. Behr sees the Gospel’s Prologue as three summaries of the Gospel in its entirety (see p. 269). Verse 1 is the first summary. Making a clear distinction between ἀρχή (normally translated as “beginning”) and πρῶτος (meaning “first”), Behr argues that merely reading ἀρχή temporally obscures the noun’s other semantic resonances such as “authority,” “first place,” or “source” and “origin” (p. 254). Furthermore, Behr argues that the preposition πρός (typically translated as “with”) in John 1:1 should not be translated as “the Word was with [πρός] God” “with,” but rather as “the Word was going towards [πρός] God.” John uses πρός here to portray Jesus “on the move, drawing ever closer to his final hour,” the hour of his passion (p. 258). Verses 2–5 is the second summary, a recapitulation of the summary found in verse 1. And likewise verses 6–18 recapitulate the first two summaries. Verse 14 is normally translated as “The Word became flesh and dwelt among us.” However, Behr argues that ἐν ἡμῖν should be translated not “among us,” but “in us.” And the consequence of such dwelling “in us” is that “we have seen his glory” (John 1:14), “which, in the Gospel of John, is again pivoted upon the cross” (p. 266).

Having written in an historical and exegetical key, Part 3 seeks to illuminate the biblical text with the writings of the phenomenologist, Michel Henry. In chapter 6 (“Johannine Arch-Intelligibility”) Behr argues that human beings typically know life by vivified matter; we never perceive life itself, only living beings. Life is “hidden,” so to speak. Therefore, in John’s Gospel when Christ claims to be the Life (John 14:6), Christ in himself as Life, reveals an unprecedented mode of phenomenality in toto (p. 278). Therefore, Christ himself is the starting point for all life and intelligibility. And it is this Life that John the Theologian identifies in his Gospel: “John unveils, in Henry’s terms, an ‘Arch-intelligibility’, meaning an intelligibility which is other than, prior to, and the transcendental condition for, any other form of intelligibility” (p. 300).

Behr’s book is unquestionably a worthy contribution to both Johannine scholarship at large and dogmatic theology. He threads together historical-critical scholarship, sacramental theology, and French philosophy in a way that is profound, moving, and often baffling. Readers of Behr will want to read his book slowly from the front cover to the back indices—and then do it again. To some, his insights may prove novel and ornate; yet, to others—perhaps those who have immersed themselves in the deep theological and philosophical waters of the church fathers and their liturgy—his insights just may direct their minds and hearts to the Life who is known in and of himself.