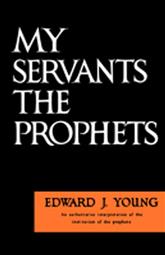 The late Edward J. Young originally published My Servants the Prophets in 1952. He served as Professor of Old Testament at Westminster Theological Seminary and was esteemed as a very able conservative scholar. Young’s works exhibit his high view of Scripture and his adherence to the view of the inspiration of Scripture as reflected in the Westminster Confession of Faith. Young’s other influential works include Thy Word is Truth (Eerdmans, 1957), The Prophecy of Daniel (Eerdmans, 1949), and a three volume commentary on the book of Isaiah (Eerdmans, 1965, 1969, 1972).

In each chapter of his book, Young concentrates on a particular issue regarding the prophetic institution in the Old Testament. In chapters 1 through 3, Young addresses the divine origin of the prophets, the relationship of the prophets to the Mosaic Law, and the terminology of  prophetism in the Old Testament (נבא , נָבִיא , רֹאֶה, etc.). In chapters 4 through 6, Young answers three questions: Was prophetism in Israel was a gift of God or did it arise as the “product of various circumstances”? (p. 75); What is the meaning of “the sons of the prophets”?; Did the prophets stand in opposition to the Israelite religious cult or as officials of the cult? In chapter 7, Young addresses the issue of true and false prophecy in Israel: if both true and false prophecy originated from Canaanite prophecy or if true prophecy was from God and false prophecy found its origins in Canaanite prophecy. In chapters 8 and 9, Young delineates the scope of the prophets’ messages (if the messages were only contemporary or reached future generations as well), and he sought to determine if the prophets’ messages were of human origin or were divine revelation.

As he addresses each issue, Young allows Scripture to speak for itself. Young builds upon Scripture’s claim to be divine revelation and contends that any serious investigation must take that claim into consideration (pp. 181-82). Furthermore, Young takes into consideration the bearing the New Testament has on the interpretation of the Old Testament. “Any interpretation,” writes Young, “which God places” upon the words of Scripture “must be taken into consideration . . . , and the New Testament, we believe, is such a Divine interpretation” (p. 33). Young also evaluates the conclusions of critical scholarship. For example, in his analysis of Numbers 12:1-8 and the relationship of the prophets to the Mosaic Law, Young critiques August Dillman’s contention that a redactor worked two accounts—one from E and another from J—into one account. In chapter 6, Young contends that Scandinavian scholarship overly emphasizes the similarity between Israelite prophetism with prophetism in the Ancient Near East (ANE) without duly recognizing their vast differences (pp. 108-10).

While Young’s work is scholarly, it is very intelligible. Young’s defense of the biblical view of prophecy is clearly delineated and well organized. The reader is not overly burdened with highly detailed or extensive endnotes. However, the readability of Young’s book does not diminish its scholarly contribution. It is evident that Young has done his research; throughout the book he ably interacts with numerous scholars. Furthermore, his defense of the biblical view of prophecy is substantive and deserves consideration by scholars of all viewpoints.

Young’s demonstration of how his understanding of inspiration impacts his interpretation of Scripture is particularly insightful. For example, Young’s view of inspiration influences his interpretation of Moses’ prophecy in Deuteronomy 18:9-22. Taking the Old Testament at face value and assuming the Mosaic authorship of the Pentateuch, Young asserts that Moses spoke the words of the prophecy to Israel (p. 20). Young’s position is contrary to some critical scholars who contend that the book of Deuteronomy was written by a prophet(s) and was found and used by Josiah to make reforms (pp. 14-15). Young then contends that in Deuteronomy 18:9-22 Moses is establishing the  “prophetic line” (p. 31). However, Young’s view of inspiration leads him further: the New Testament is part of God’s Word and has a bearing on the interpretation of Moses’ prophecy. Verses such as John 1:20, 21; 6:14; 7:40, 41 clearly indicate that the Prophet—namely, Jesus Christ—is spoken of in Deuteronomy 18:9-22 (p. 34).

Some readers may argue that Young’s book is dated; nevertheless, My Servants the Prophets is still a valuable tool for the Old Testament student, especially for those with a high view of Scripture. Young skillfully demonstrates how to use the teachings of Scripture regarding Israel’s prophets and how to analyze critical scholarship in light of the Old and New Testaments. Young’s insistence that the Bible is the Word of God gives the reader confidence that Scripture is sufficient to answer critical scholarship.