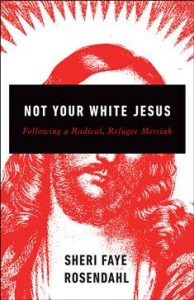 What would it look like to rediscover the power behind the “red letters” in the gospels during an era of rampant racism, hatred, and division? In Rosendahl’s Not Your White Jesus: Following a Radical, Refugee Messiah, she encourages us to step out of our institutional thinking about the church and challenges the image and ideals of the Americanized, blond-haired, and blue-eyed Jesus. She puts forth the invitation to become followers of a radical, Palestinian, brown-skinned Jew—Jesus Christ of Nazareth. Rosendahl’s work is a bold critique on the Christian church in the United States, arguing that American cultural and nationalistic identity has deeply influenced and warped Christianity that it is currently unrecognizable to the way of life that the Jesus of the gospels taught and lived (pp. 16-17). She addresses the election of Donald Trump, writing with candor to a Christian audience that, as she believes, has forgotten Jesus’ original message (pp. 100-101). Divided into two parts, part one focuses on the profile of the radical, refugee Messiah, while part two examines current issues such as war, racism, nationalism, consumerism, violence, and misogyny. She examines these aspects by focusing on the teachings of Jesus, which she describes as the red letters of scripture.

In part one, Rosendahl focuses on the identity of Jesus Christ and contends that he is primarily a radical refugee Messiah. This exploration also includes a personal memoir of her encounter with the risen Christ. By focusing on this identity of Jesus, it is contrasted to what she describes as the “White American Jesus” that is later explained throughout the book. She narrates her shock when she realizes that the American Jesus she learned of in her youth did not, in fact, prefer American citizens over other people. Nor did this Jesus champion America’s greatness in relation to the rest of the world. Instead, she realizes how deeply “whitewashed” the Americanized Jesus had become, a beacon of conservative ideology controlled by a powerful group of men (p. 5). This Americanized Jesus, Rosendahl contends, cares little about health care for the vulnerable, but applauds tax breaks for big business and millions allocated to the nation’s war machine. As she argues, it suggests that this portrayal of Jesus crusades for “life,” but routinely deports father and mothers back to their countries, thus ripping families apart, which is antithetical to life.

Thus, Rosendahl puts forth a major reason why the historical Jesus is crucial for understanding Christianity’s original teachings, naming the fact that Jesus was both a Jew and a Palestinian (p. 19). She provides a quick and well-researched overview of the current Israeli-Palestinian conflict, pointing to the American church with its “weird Christian Zionist ideals” as the funders of an essentially apartheid state in the Middle East today (pp. 20-21). Rosendahl challenges readers to ask what the world would look like if Christian churches actually lived out the teachings of Jesus. She believes that this would create a society that is generous toward the poor, allocates budgetary funds toward humanitarian causes, and pulls the most vulnerable out of poverty (p. 7).

Rosendahl finds the solution, and implicitly a rejection of the American Jesus, in the “red letters”—the words attributed directly to Jesus. She introduces the reader to the Jesus of the gospels. A Jesus, as she summarizes, is a Middle Eastern Jewish man who was born of an unwed teenage mother, fled from an oppressive king, amazed scholars and educated folk of his day, lived a radically minimalistic lifestyle, and kept company with the marginalized of society while displaying a lifestyle of love in action (p. 6). Rosendahl ends part one of her book by exhorting readers to be willing to see the hurt and pain around us and in this way. If we would do so, she believes that this would lead to an ethical response of compassion. She argues that love is not passive but speaks boldly as we advocate for those in need.

The second part of the book tackles the issues of racism, nationalism, refugees, violence, consumerism, misogyny and the marginalized. As she outlines the major issues within American Christianity, Rosendahl frequently points the reader back to Jesus in order to display the disturbing ways that American Christianity has rallied behind causes that often contradict his teachings. For example, she mentions the United States’ current exclusivist foreign policy as a complete indictment on the Christian faith; as the U.S. shuts out, bans, and deports, Jesus Christ inclusively welcomes, accepts, and validates the foreigner. Rosendahl also cites the Rev. Dr. Martin Luther King Jr. who said, “In the end, we will not remember the words of our enemies, but the silence of our friends” (p. 96). She asserts that the red-letter Jesus of the gospels would have not stayed silent on the sidelines, but would have fearlessly joined the fight against oppression with his brother and sisters of color, because the way of Jesus is always the way of bold and risky love. Thus, Rosendahl concludes her book by encouraging readers to re-examine deeply our stances on current social issues in light of the red letters of the gospel, especially if we are going to take the gospel seriously. She proposes that the world will only change once Christians take up the cause of love initiated by the Middle Eastern, Jewish refugee Messiah, who is also known as Jesus Christ.

Throughout her book, Rosendahl’s occasional sarcasm and humor allows readers to feel included in a dialogue. As she recounts personal experience coupled with research and facts about real world events and current issues, she invites readers to think about all the different positions the American Christian church has taken, which often, as she proposes, stand in direct contradiction to what Jesus exemplified in his life. She continuously points the readers to the radical Messiah of the gospels, asking us to think differently about our faith and the way we live it out, both individually and collectively. Due to Rosendahl’s candor, this book is easily accessible to those not as familiar with the faith or those who may be discouraged by terrible displays of Christianity around them. It also may attract disillusioned Christians, seeking for a different understanding of Christianity. This book will also challenge and shock those who may identify with the Christianity that she distinguishes as an American version of the faith. This book is not for the faint of heart. Thus, Not Your White Jesus is a bold critique of American Christianity that compels Christians of all denominational backgrounds to honestly reexamine the ways the church often fails to live up to the teachings of Jesus in the red letters of the Gospels.