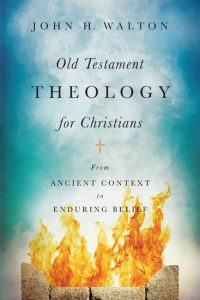 John Walton is one of the most well-known and prolific scholars of the Old Testament today, having published several Old Testament introductions, works on the conceptual and contextual world of the Hebrew Bible, and various individual monographs such as the Lost World series. He currently serves as a Professor of Old Testament at Wheaton College and Graduate School.  An offering concerning the theology of the Old Testament from an author with his pedigree is therefore of significant interest.

Walton’s approach in this volume is to try to discern the contextual world of the Old Testament authors and then to try to build a bridge from that thought world towards a Christian understanding of these concepts, or what Walton terms as “enduring theology.” This methodology has several advantages, with perhaps one of the strongest contributions being the safeguarding against reading New Testament passages and their theological concepts back into the Old Testament, which may not teach those same principles. This is not to say that Walton holds that the Old Testament and New Testament are contradictory to one another; rather, it is to say that Old Testament concepts should not immediately be seen in light of a New Testament concept with similar terms. Walton raises “the spirit of the Lord” as one example of this danger (281-282).

These concluding lists are an excellent synecdoche for the real strength of this book, which is a sharpened understanding of how the Old and New Testaments relate to one another. One of the strongest portions of the work is the chapter on Sin and Evil, in which Walton argues that the Old Testament concepts of sin, evil, satan, and demons are very different than common New Testament-informed understandings of the same. The Old Testament does not teach Original Sin as such nor does it hold that satan or a demon took an active role in human events (215). Walton offers his readers much wisdom by demanding a clear epistemology: is a concept or definition actually taught in the Old Testament or New Testament, or is that concept or definition something from the conceptual world of either testament, or is it perhaps a product of later interpreters? A too-hasty unification of these ideals will cause the two Testaments to appear to disagree where they may not actually. The concept of “evil” is different in the ancient Near Eastern thought world as compared to the Hellenistic thought world, which informed the New Testament, yet Walton does not feel that the New Testament definitions invalidate Old Testament teachings. At the same time, he shows that the Old Testament concept of evil offers insight to interpreters in areas left unexplored by New Testament passages. “The New Testament offers more specificity theologically by factoring Christ into those purposes, but the Old Testament provides the basis on which this specificity is built.” (217) By sharpening the differences between the Old and New Testament, Walton is able to present his readers with a broader, deeper, truer understanding of each and the unified picture of God that they present.

While the primary strength of the work is the sharpened view of the differences and therefore the unity between the Old and New Testaments, the other major strength is in the understanding of the underlying concepts of temple and Torah, explored at length in chapter five. Far too often, attempts at understanding Old Testament Law from a Christian point of view are either too reliant on external, non-textual categorizations (such as the divisions between civil, ceremonial, or moral aspects of the Law) or primarily interested in the Law as it intersected the lives of Jesus and/or Paul (such as the modern discussion regarding the New Perspective on Paul). Walton, in my view, gives the most satisfying, approachable window into the Temple and Torah by finding their unifying role as arbiters of sacred space. For Walton, the idea of sacred space has similarities with order and morality, though each of those are more properly understood as the end results of sacred space rather than producers of it (143-144). Israel was different than the surrounding culture by understanding their purpose as partners with God in bringing His sacred space into the world (155). Where the ancient temple was often conceived of as a sacred space because of the presence of a god there, the Old Testament extends that space from the temple to the entire cosmos (146-147). The Law, then, served as directives to help maintain access to these sacred spaces as well as the way that God’s presence would be reflected to the outside world. “However, the Torah was contingent on the temple, not the other way around.” (157) This focus the Law has on maintaining Israel’s status as a covenant people, marked out as holy, who live in proximity to sacred space is unlike other ancient Near Eastern people (159). Walton finds this coidentification the covenant people have with Yahweh as one of the enduring teachings of the Old Testament. In the New Testament, though, the covenant people are defined by a people group given holy status through Christ and the New Covenant. The purpose remains: to coidentify with Christ and to bring His presence and purposes into the world (174). The bridge that Walton builds from the Old Testament conceptual world to a modern understanding of the community of Christ is a very sturdy one.

This volume is excellent. Walton’s lifetime of study is brought to bear on this monograph, giving it a depth not often found in a work of this length. His particular point of view is also refreshing, as Walton chooses to focus on concepts that other theologies of the Old Testament don’t discuss in depth or see as central. The strength of his argumentation is such that readers will find themselves wondering why these categories aren’t seen as the central thrust of Old Testament theology! He finds a way to give voice to the unique contribution of the Old Testament while not totally sundering it from the New Testament nor subsuming its message and concepts to later New Testament ones. Time spent with this work will help a reader appreciate the whole voice of Scripture as a unified view into the purpose, nature, and character of God while at the same time better understanding the diversity of the theology contained in its pages. This is a task that interpreters spend lifetimes on; few have succeeded as well as Walton. This book is recommended for all serious Old Testament students.