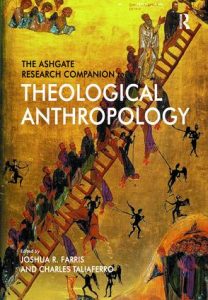 Anthropology is among the more complex disciplines in Christian theology. Part of what makes this discipline so complex has more to do with how one conceives of the questions—both in terms of starting points and assumptions—than it does with where one finds the answers to them. Remarkably serviceable to advanced graduate students and scholars alike, The Ashgate Research Companion to Theological Anthropology is certainly the place to start for those who want to come to terms with both the questions and answers that concern human constitution, evolutionary biology, the image of God, cognitive neuroscience, human freedom (and much more) as it relates to Christian theology.

Boasting a total of twenty-seven chapters, plus the introduction, the Companion is divided up into seven main sections: 1) Methodology in Theological Anthropology; 2) Theological Anthropology, The Brain, The Body, and the Sciences; 3) Models for Theological Anthropology; 4) Theological Models of the Imago Dei; 5) Human Nature, Freedom and Salvation; 6) Human Beings in Sin and Salvation; 7) Christological Theological Anthropology. A fairly balanced ratio of chapters to sections displays the thoughtful labor of two discerning editors, who from all appearances have rightly anticipated the broader scope of their reader’s interests. This is particularly true for those interested in more commonly controversial subject areas in the Christian tradition. The contributors too are as diverse as is the content of their essays; a good mix of theologians and philosophers, both junior and senior scholars, and Roman Catholic, Protestant, and Eastern Orthodox thinkers. The introduction is a relatively brief and yet, quite useful state of the art, reading more like an invitation to keep reading than anything else. In short, The Ashgate Research Companion to Theological Anthropology bears all the marks that a good research companion should. In order to make this assertion more measurable, let us consider a sampling of three of its chapters in some more detail.

Consider first, Marc Cortez’s thought-provoking chapter, ‘The Madness in Our Method: Christology as a Necessary Starting Point for Theological Anthropology’ (pp. 15-26). As the inaugural chapter of the Companion, Cortez’s well-researched, carefully-crafted argument in some ways set the tempo, so to speak, for what readers ought to expect from the remaining essays. In short, Cortez argues that our understanding of Christ’s humanity as ‘true humanity’ ought to be archetypical for our understanding the nature of the remainder of humanity. Cortez’s Barthian-inspired case is complimented by John Cooper’s essay, ‘Scripture and Philosophy on the Unity of the Body and Soul: An Integrative Method for Theological Anthropology’ (pp. 27-44), which offers an alternative thesis to that of Cortez. Cooper argues, roughly, that Christians ought to weigh contemporary (and historic) models of anthropology against “what the Scripture teaches about the unity of the body and the soul” in order to achieve what he calls “a comprehensive theological anthropology” (p. 27). Orbiting mainly around a discussion of the soul-body relationship in the afterlife, and offering what ends up being a (helpful) macro picture of the status of the debate in contemporary theology about which comes first, Scripture, philosophy, or science in determining our theological anthropology, the take away from Cooper’s essay is mostly a subjective assertion that while debate continues, our litmus test for determining the best model of anthropology ought to be the Christian Scriptures. Cortez’s approach is by no means different than Cooper’s on this point. Cortez simply takes Cooper’s assertion a step further, namely, by grounding a scripturally faithful anthropology in our Christology. Cortez goes on to defend this thesis by an appeal to Barth, whom he quotes as saying, “‘The nature of the man Jesus alone is the key to the problem of human nature’” (p. 19). This is certainly controversial (particularly in light of Cooper’s argument). I am admittedly a bit suspicious of mounting an argument for this or that account of human nature purely from the Scriptures, which as far I see things at this point, does not offer much of detailed prescription for (so much as a description of) how we ought to account for the nature of humanity. That said, Cortez’s treatment of Barth is more than fair and for this reason, persuasive, at one point drawing attention to the care that ought to be taken in not mistaking Barth’s method as anything more than a “scientific study of the ‘phenomena of the human’” (p. 24). Invoking these Barthian concerns almost as a subtle warning to contemporary theologians who run considerable risks of reading far too much onto the humanity of Christ by beginning with “non-theological interpretations” of humanity at large, Cortez’s final challenge to readers comes down to this: ‘how self-consciously and honestly systematic is your theology?’ In other words—taking a cue from Barth—developing a coherent theological anthropology cannot ignore other theological loci.

Next, consider, Ben Blackwell and Kris Miller’s chapter, ‘Theosis and Theological Anthropology’ (pp. 303-317). This essay covers an enormous amount of ground—biblical data (i.e., 2 Peter 1.4; Colossians 2.9-10), Patristic theology (i.e., Maximus the Confessor), and Modern theology (i.e., Tom Torrance)—in short but careful order. More than a helpful lesson in how one might ‘bring the ancient and modern’ (p. 303) discussions of human participation together, Blackwell and Miller make a convincing case for “the priority of a relational ontology for understanding theological anthropology” (p. 315). And playing off of his recent and insightful work (Christosis: Pauline Soteriology in Light of Deification in Irenaeus and Cyril of Alexandria [WUNT 2/314; Tubingen: Mohr Siebeck, 2011]), Blackwell and Miller paint a helpful picture of the development of soter-theotic thinking in their treatment of Maximus. Here, they deploy Blackwell’s distinction between what he (in his monograph) calls “attributive deification” (“[becoming] God by grace”) and “essential deification” (“[becoming] God by essence”), arguing both for Maximus’ commitment to the former and as a result of his Christological conviction that in the incarnation Christ assumed all (elect) humanity to himself, Maximus’ commitment to some sort of eschatological and “unconfused union” of God and “restored” humanity (pp. 307-8). With this, Blackwell and Miller jump ahead from the seventh to the twentieth century and Torrance’s doctrine of “participation” (p. 309). The author’s take care to faithfully represent Torrance as they did Maximus, coming largely to the same conclusion that for Torrance “human participation is not by nature but by grace” (p. 310). They argue that, “Torrance’s notion of participation is thoroughly Trinitarian. For Torrance, humans are adapted for union, communion, and participation in God through and by the Spirit without losing our humanity” (p. 313). While Maximus provides the basis for their initial conclusions, namely, that Christian soteriology amounts to some sort of theosis, it is upon Torrance’s Trinitarian conclusions that Blackwell and Miller ultimate make much of their case for “the priority of relational ontological for understanding theological anthropology” (p. 315). In the end, their account of relational ontology is more roughed out than finished, going something like this: humanity is designed for (because we reflect) Trinitarian union; humanity is then created for union; the fall corrupts this union; Christ’s redemption re-inaugurates this union; both the divine impulse for union and the nature of divine union itself ought to inform how we understand soul-body relations. Their conclusion, that “the doctrine of theosis draws anthropological discussions back to the theocentric intention for humanity, redemption as union and participation, and a relationship ontology”, is reflective of both Cooper and Cortez’s sentiment that our exploration of such highly nuanced issues in theological anthropology will necessarily be ongoing (p. 317).

Finally, let us consider John Chan’s ‘A Cartesian Approach to the Incarnation’ (pp. 355-67), and what he says is his “modest” attempt to “consider the possibility of an orthodox doctrine of the incarnation with the presupposition of Cartesian dualism” (p. 355). Chan’s piece exemplifies what I think is some of the best of what this Companion offers—rigor, careful research, and good ol’ constructive philosophical-theology. Certainly less methodological in his approach than Cortez and less historical-theological than Blackwell and Miller, Chan’s piece is equal parts theology and metaphysics; or, better still, a piece of Analytic Theology. Chan’s project involves a few important moves, the first of which is a helpful disambiguation of what a Cartesian account of substance dualism looks like in comparison to other accounts of substance dualism that have dominated the bulk of the Christian tradition. On a Cartesian model of substance dualism, Chan carefully argues that personhood is identical to the soul—the body thus being purely contingent. He says that, “according to Cartesian Dualism (CD), embodiment is a contingent state of affairs—the minimum requirement for personhood is being identical to a soul; being ‘attached’ to a particular hunk of matter is not necessary” (p. 356). For those familiar with the constituents of Chalcedonian orthodoxy, Chan’s next move is not hard to anticipate as he traces out some of what is at stake for the worries that lie between the Docetic and Nestorian heresies. Interacting with Oliver Crisp’s account of the virgin conception of the God-man, Chan exposes some of the liabilities of relational views of the soul, particularly as it pertains to the causal origins of the human body and soul of the humanity of Jesus. Upon this foundation, Chan makes his final move, namely, a defense for the so-called “abstract nature model” (that the Son assumes a set of properties, necessary and sufficient for human nature) of the incarnation, which he says is a way to elide problems that necessarily stem from “concrete nature models” (that the Son unites himself to a concrete particular, yielding what is sometimes called a three-part compositional Christology); the worry, of course, being that “a Cartesian soul is a person simplicity and in a concrete nature incarnation, the Word assumes a human nature in virtue of Cartesian soul. In so doing, he takes on a distinct person on both simpliciter and relational versions of Cartesian dualism” (p. 367). Chan, like the other contributors that we’ve considered to this point leaves the reader thinking about the potentials for further research, by pointing to several hurdles that his abstract nature Cartesianism has yet to overcome.

From a low and slow flyover, as it were, there is little to criticize about this volume—its contributors represent some of the brightest minds in the field and their contributions cover some serious ground in four-hundred pages. From thirty-five thousand feet, however, this Companion lacks one signal, though, less-than-obvious feature. Not one chapter deals exclusively with how an idealist metaphysic makes sense of human nature. While idealism is certainly mentioned in several chapters as a still viable, though significantly under-appreciated account of human nature (most of which feature in Cortez’s other chapter in the Companion ‘The Human Person as a Communicative Event: Jonathan Edwards on the Mind/Body Relationship’), it otherwise makes little sustained appearance in the volume. Farris, of course, is not unconscious of this fact, having both edited and contributed to the first volume in the Bloomsbury series, Idealism and Christianity. That so little attention is paid to idealism is at best, a minor flaw, especially given the current state of interest in the subject.

Finally, as has become my habit, let me say a few words about the physical appearance of the volume itself. Ashgate (recently absorbed by Taylor and Francis) has had a reputation for producing high quality volumes—hat’s off to the printers! This volume is a prime example. There is something to be said for durability in the world of $100+ books these days, and this volume has it. No doubt, what Ashgate had in mind in terms our how useful this volume will henceforth be is anticipated by how well it has been constructed; tightly bound, glossy finish, quality paper, clear and readable fonts, and ample margins for note-taking. Certainly its most striking feature of my hardback copy is its wonderfully eye-catching cover art (John Climacus’, The Ladder of Divine Ascent)—a think-piece in and of itself. Finally, let me say that publishing often moves at near glacial speeds. But for all who anticipated Farris and Taliferro’s The Ashgate Research Companion to Theological Anthropology, it was well worth the wait. 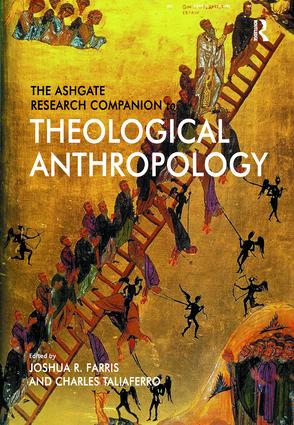