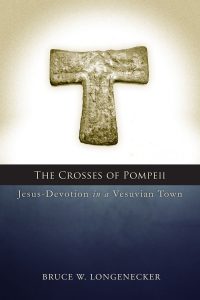 Bruce Longenecker undertakes a historical study in this book that inquires into the evidence for Jesus-devotion in the Roman city of Pompeii prior to its destruction when Mount Vesuvius erupted in 79 CE. He finds the answer by looking at cross-shaped symbols in the city’s archeological record. Having previously taught in the UK, Longenecker is the W. W. Melton Chair of Religion at Baylor University. Among his previous publications, Remember the Poor: Paul, Poverty, and the Greco-Roman World (Eerdmans, 2010) and The Cross before Constantine (Fortress, 2015) are particularly pertinent to the volume currently under review.

The book begins with an account of its origins. Longenecker began to study the Vesuvian region in order to understand better the concrete realities of first-century life in which early Christianity developed. After noting that certain traditional elements in Vesuvian scholarship are being reevaluated in fresh ways, he locates his book as part of this scholarly movement. The book “will demonstrate that first-century Jesus-devotion did, in fact, have a Vesuvian foothold in the town of Pompeii” (p. 8). For readers accustomed to studying early Christian literature, Longenecker’s study provides fresh perspectives because it focuses primarily on artifacts. The item with which Longenecker begins is a cross-shaped imprint on a ground floor wall in a bakery on the western side of Pompeii. The object that left this imprint has often been discussed by scholars in conjunction with a similarly shaped imprint in nearby Herculaneum. Although some argue that the Herculaneum cross was left by a wall-bracket and has no devotional significance, it does not follow that all cross-shaped items are therefore devoid of ceremonial meaning. Before the argument can proceed further, however, Longenecker sketches the use of the cross prior to Constantine. Relying on his previous work, Longenecker argues that the cross became an important symbol prior to the reign of Constantine (pp. 67–74). Further, he proposes that the equilateral cross was employed in the imagery of Rev 7:2–3 as an interpretation of the mark mentioned in Ezek 9:4–6 (p. 92).

Having laid this extensive background, Longenecker focuses his attention on Pompeii. After more fully stating the reasons for separating the Herculaneum cross-shaped imprint from the one in Vesuvius, Longenecker argues that the cross had symbolic overtones of Jesus-devotion and was styled after the Egyptian Ankh. Longenecker further states that the cross is not out of place alongside the religious pictures of a snake and a phallus found in the same bakery. It is conceivable that some may have looked to Jesus for protection without immediately being able to give up on all other forms of devotion (pp. 134–140). This cross anchors Longenecker’s argument that some Pompeiian residents were devoted to Jesus. Three other objects serve as primary pieces of evidence. These include a graffito of the Latin verb vivit (he lives) in which the final –it are combined into a cross-shaped ligature, another graffito in which Christians are discussed, and a cross found on a stamp ring that appears to have belonged to a certain Meges. Longenecker also mounts a secondary case for Jesus-devotion in the city by presenting what are likely the freshest pieces of evidence in the book. In his travels to Pompeii, Longenecker has found nineteen crosses faintly inscribed in paving stones around the city. While clarifying that the case for Pompeiian Jesus-devotion can stand or fall without this supplemental evidence, Longenecker proposes that the crosses served an apotropaic function “so that the forces of evil would not prevail against them in the places where they resided and worked” (p. 237). The book closes with two chapters that consider the significance of Longenecker’s findings along with an appendix that contains photographs and descriptions of the nineteen street crosses.

Longenecker makes a strong case for the devotional use of the cross and for the corresponding presence of Jesus-devotion in Pompeii that follows from this identification. In so doing, Longenecker stands against the majority position of Pompeiian scholarship. While his minority arguments should give readers who are uninitiated to archeological studies pause before accepting the arguments too quickly, Longenecker’s rigorous method and challenge of scholarly presuppositions are exemplary. He notes that historical work requires not only deduction but also disciplined inference (pp. 60–61). After showing how the pieces of the puzzle can be put together in Pompeii, Longenecker fittingly cites Sherlock Holmes’s maxim: “When you have eliminated the impossible, whatever remains, however, improbable must be the truth” (p. 253). Fitting the historical study contained in this book, the arguments are inferential rather than deductive, but the discipline utilized to constrain the inferences keeps the conclusions on track. In addition, Longenecker challenges the presuppositions that govern scholarship on Pompeii. While there is no grand conspiracy theory that has kept other scholars from evaluating the evidence in the same way that he has, he proposes that the accepted scholarly paradigm needs to be shaken up (pp. 259–260).

Three additional elements can be noted more briefly. First, the book is filled with pictures and maps to orient those unfamiliar with Pompeii. Second, Longenecker does not assume that all Jesus devotees practiced their devotion in exactly the same way as Paul or the author of Acts. Finally, Longenecker rightly notes that early Christian persecution ebbed and flowed prior to Constantine. Because Vespasian’s reign (69–79 CE) seems to have been a time when persecution was at a low-point, this increases the likelihood that Jesus-devotion in Pompeii could be undertaken publically.

At this point, though, one can observe a tendency in the book to overstate conclusions. For example, Longenecker jumps from the correct observation that persecution ebbed during Vespasian’s time to a comparison with the time of Constantine. Pompeii is described as “a pseudo-Constantinian island in the pre-Constantinian stream” (p. 77). Even if state-sponsored persecution was low, it is difficult to imagine that popular skepticism of Christianity alleviated social pressures to the same degree that Constantine’s conversion would in the fourth century. Longenecker similarly appears overconfident when he declares that Jesus-devotion is better attested in Pompeii than Jewish presence (p. 257).

Yet perhaps the best way in which to consider Longenecker’s contribution is by thinking further with the book. If students of the New Testament accept Longenecker’s depiction of Jesus-devotion alongside other apotropaic devotional practices, this may shed light on certain passages in first-century Christian literature, such as Acts 8:4–24; 13:6–12; 1 Corinthians 8:1–13; Galatians 1:6–9. Although care would be required to avoid anachronism, The Crosses of Pompeii may also have ramifications for interpreting early second-century texts due to the preservation of Pompeii. For example, the Shepherd of Hermas is often thought to have an Italian provenance and regularly warns against double-mindedness. Although double-mindedness has something to do with economic practices in the Shepherd, one might consider whether there are devotional connotations in how the word is used.

Because of the book’s readability and high-quality research, The Crosses of Pompeii will be of particular interest to students interested in Christianity within the first-century Roman world. However, the book will also benefit researchers and the libraries that enable their research on account of the well-argued presentation and because many early Christian researchers focus on literature rather than artifacts. Longenecker’s case for Jesus-devotion in Pompeii is worthy of full consideration, and the book is highly recommended. 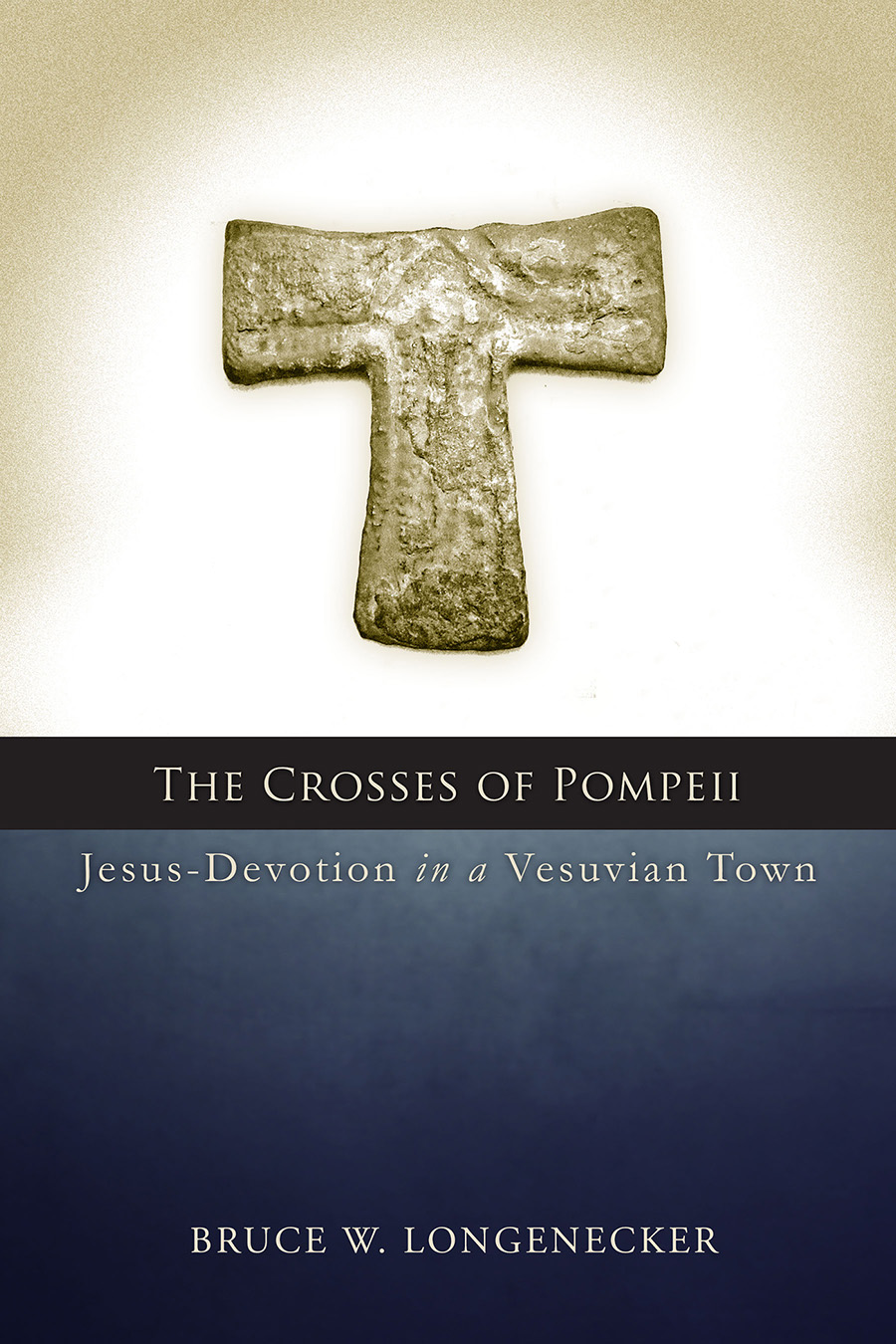