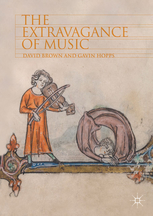 David Brown is an Anglican Priest, Emeritus Professor of Theology, Aesthetics and Culture, and Wardlaw Professor at the University of St Andrews. His work explores the relationship between theology and philosophy, and most recently, the interactions between theology and the arts. Gavin Hopps is Senior Lecturer in Literature and Theology, and Director for the Institute for Theology, Imagination and the Arts (ITIA) at the University of St Andrews. His research focuses on theology and the arts, with particular interests in Romantic literature and contemporary popular music.

The Extravagance of Music presents an optimistic and generous understanding of music’s potential to allow for divine encounter. At the heart of the book is the notion that music is inherently “extravagant”—a term that Brown and Hopps root in its medieval origins, extrā vagārī, meaning to stray outside boundaries or to go beyond limits. This “generous excess” that music provides can potentially mediate our experiences of a similarly generous, extravagant God. The study challenges previous well-chartered but significantly more constrained conceptions of the theological possibilities of music. These have tended to focus on certain styles, or have limited music to its ability to refer to what has already been revealed to us via other means. By consciously pushing beyond these constraints, Brown and Hopps invite the possibility, at least, that music can actually say something new to us about God.

In fact, The Extravagance of Music is all about pushing past boundaries. Often theologians have confined their musico-theological enquiries to a single music tradition, but a major strength of Brown and Hopps’ book is that it transcends this narrowness by considering music not only in the Western “classical” style, but also in the world of popular music. This results in a book of two distinct halves, characterised by two seperate authorial voices: in part 1 Brown walks us through the relatively well-trodden domain of Western art music, although he travels beyond the more typical territory of sacred music to concentrate on overtly secular instrumental music. Hopps goes further in part 2, pushing beyond the borders of the Western classical tradition to consider the potential of popular music. As a result, the territory traversed in The Extravagance of Music is illuminatingly wide, but the relative separateness of the authors’ discussions is mitigated only to a limited extent by the books’ tie-together introduction and conclusion chapters. Brown and Hopps essentially leave it up to the reader to bring together their accounts in a multi-layered understanding of music’s extravagant possibilities.

The book crosses borders, in particular, imposed by two prominent scholars: theologian Jeremy Begbie, and philosopher Roger Scruton. One of the strengths of The Extravagance of Music is that Brown and Hopps are able to show how the denominational and cultural prejudices of these scholars can give rise to overly restrictive musico-theological worldviews. Jeremy Begbie’s ideas about God and music, for example, while often insightful, are nevertheless conceived within the very specific paradigm of his Reformed faith, with all its uncompromising lauding of Scripture, and its innate guardedness against idolatry. Brown and Hopps challenge Begbie’s refusal to accept that music can have any revelatory potential beyond its ability to refer to Scripture, instead inviting an openness to the possibility that music can provide something over and above mere aesthetic experience or strict Scriptural reference, which can lead to genuine revelatory experiences of the divine.

Hopps also gives short shrift to Roger Scruton’s wholesale dismissal of pop music’s theological value, pointing out his lack of experience in the field, and questioning his ability to make such judgements. Drawing upon his own considerable pop music expertise, Hopps presents a nuanced account of popular music’s theological potential, rooted in the “new” musicology tradition where scholars have moved beyond the analysis of abstract musical works, towards a realisation that the meaning of music can only really be known in the act of listening or performing (or in the words of Christopher Small [1998], in the act of musicking). Through this lens, the banalness or “semantic lack” of certain types of pop music can actually function as a theologically productive “affordance structure”, which according to Hopps potentially, “elicits the listener’s emotional investment and imaginative participation” (p. 287), orientating them towards God and potentially engendering epiphanic experience.

For a student of biblical and theological studies, The Extravagance of Music presents an openminded and expansive theory of music as a gateway to the divine. And while Brown and Hopps invite the reader to join them in “going beyond” previously charted territory, their ideas are rooted firmly in more traditional, well-established concepts of music. This potentially allows for valuable grounding in some of the core philosophical, theological and aesthetic theoretical underpinnings of music and the sacred, from Platonic notions of Harmony of the Spheres, to the whole question of aesthetic reception. Indeed, the reader will come away from the book not only having traversed the boundaries with Brown and Hopps, but also having a much better idea of where, historically, these boundaries have been drawn.