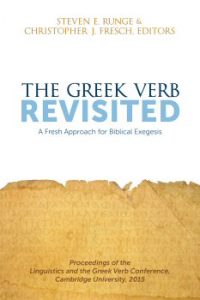 The topic of verbal aspect has been highly contested since the publication of Stanley Porter and Buist Fanning’s dissertations over twenty-five years ago. Despite the copious amount of literature written on the issue, there appeared to be no way forward in the debate. That is, the paradigms set forth by Stanley Porter, Buist Fanning, and those who followed did not create a paradigm by which solutions could be found. However, with the publication of Steven E. Runge and Christopher J. Fresch’s The Greek Verb Revisited: A Fresh Approach for Biblical Exegesis, the apparent stalemate in this quarter-of-a-century debate shows tremendous promise for new ways forward. For that matter, the impact of Runge and Fresch’s new monograph upon the topic of verbal aspect within the Greek verbal system can be summarized in the remarks of Constantine Campbell, who states that this volume “deserves careful consideration” since it will “no doubt occupy a significant position within modern discussions of the Greek verbal system” (endorsements page).

In The Greek Verb Revisited: A Fresh Approach for Biblical Exegesis, Steven Runge and Christopher J. Fresch edit a volume in which linguists and Biblical scholars come together and address questions concerning the Greek verbal system that have been debated for the last twenty-five years. What is more, these scholars address these questions in light of the most recent developments within linguistic studies, developments which in many respects are grounded upon discourse grammar. According to Runge and Fresch, the goal of this volume is not to give the definitive answer to these questions that have been debated for almost three decades. Rather, it is to “break the impasse and to see the discussion move forward” (pp. 3–4).  Furthermore, the thesis of this volume is that the most linguistically viable position is that the Greek verbal system is made up of a combination of both tense and aspect (p. 3). While it is beyond the scope of this review to thoroughly interact with each essay, after concisely providing a summary of the content of this book, I provide substantive interaction with a select article representative of Runge and Fresch’s work.

Runge and Fresch divide the book into three sections—section one: overview, section two: application, and section three: linguistic investigation. Section one consists of four chapters which seek to provide the theoretical framework for the thesis set forth in the book. For instance, in chapter two, Christopher J. Thomson interacts with the differences between the way aspect is defined in general linguistics and New Testament studies, and then in chapter three, Rutger Allan examines how the augment and perfect developed in classical Greek.

In section two, Runge and Fresch seek to apply the theoretical framework discussed in section one, incorporating essays which apply a discourse approach to various corpora. For instance, in chapter five Stephen Levinsohn seeks to demonstrate that within narrative genre, foreground is communicated through verbs that move the story forward while background information is set-forth in verbs that do not portray an event. In chapter 6, Patrick James applies his classical Greek training to examine the function of the imperfect, aorist, historic present, and perfect within John 11.

Now that the content of Steven Runge and Christopher Fresch’s The Greek Verb Revisited has been briefly summarized, I will now more thoroughly interact with one of the essays within the book in order to provide a sampling of the type of work the reader can expect to find. In her article “The Historical Present in NT Greek: An Exercise in Interpreting Matthew,” Elizabeth Robar addresses the issue of the use of the present tense verb form in historical narrative. She argues that this form is used in narrative as an “editorial device to indicate thematic prominence” (pp. 341–346; 350). Further, she states that the scope of the present verb form in narrative is the entire discourse unit in which it opens (pp. 349–350). For this reason, Robar holds that one has to understand the broader discourse episode in order to determine the units in which the historic presents are located (p. 350). She maintains that identifying discourse units is based upon two discourse features, lexical choice and developmental markers (p. 349). Moreover, she suggests the following delimiters for determining the discourse units of the historic presents, basing them upon the section of the narrative episode in which the historic present is located—end section: the unit is the clause itself; middle section: the unit may be either a single speech unit or encompass multiple speech units; and beginning section: its scope is the entire narrative episode itself (p. 350).

Robar identifies with Steven Runge, stating that her thesis is very similar to his processing hierarchy (p. 332). Moreover, she comments that the traditional view that the historic present is used to communicate vividness, bringing an event from the past into the present, should not be completely dismissed but should simply be linguistically nuanced (pp. 332–333). That is, she replaces the traditional concept of vividness with prominence, in which the present verb form requires more processing time than the expected verb forms. What is more, in support of tense being a semantically encoded feature of the Greek indicative verb form, Robar traces the history of the historic present cross-linguistically and seeks to show that the historic present is far more prevalent in languages with a more developed tense system, particularly the present and future tense (pp. 333–335).

In conclusion, although the topic of verbal aspect will continue to be highly contested for many years to come, Steven E. Runge and Christopher J. Fresch’s The Greek Verb Revisited: A Fresh Approach for Biblical Exegesis has made a significant contribution to this challenging topic. Although I found this work to be characterized by succinct, clear argumentation grounded upon solid research, I do have one minor criticism. Namely, I found the three-fold division to be a bit unclear. For example, in the third section the focus of the essays are supposed to be upon theoretical issues that lie behind the approach to the Greek verb by scholars represented in this work. However, the first essay within this section does not appear to match the parameters set forth in the section, since Elizabeth Robar is merely testing her theory within the book of Matthew. This essay would fit best within the second section, since it is applying the theory. Nonetheless, I enthusiastically recommend this book to anyone who desires to be conversant with and aware of the most recent research on this controversial and significant issue within Greek grammatical studies. 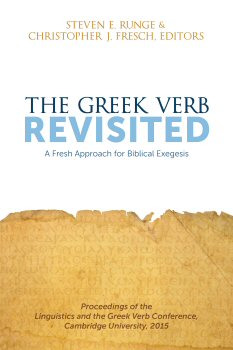