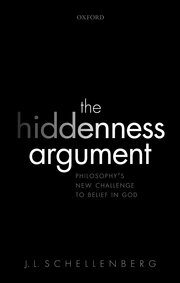 John Schellenberg, Professor of Philosophy at Mount Saint Vincent University (Canada), brought “The Argument from Divine Hiddenness” (ADH) into the purview of academic scholarship. This (quite easy) argument goes like this: the Christian tradition depicts the ultimate well-being of human creatures as being dependent on a loving relationship with God. However, if God exists and is perfectly loving, why does not God make sure that all come to believe in Him? God’s hiddenness and the phenomenon of nonbelief seem to count against the very existence of a perfectly loving God. The hiddenness argument takes the form of a philosophical argument against theism, and much of this short book is dedicated to strengthening and defending the premises that when joined together entail the conclusion, “God does not exist”.

Chapters 1 and 2 establish the philosophical groundwork for Schellenberg’s project. He provides the reader with the basic tools, explains the nature and purpose of making an argument, and what “philosophers are up to when they produce what looks like technobable” (p. 14). He further explains the key term of “hiddenness” and what it means to have a worldview that makes reference to an ultimate reality (ultimism). Chapter 3 seeks to identify the precursors to the hiddenness argument and identify when the “‘germ’ of the idea of hiddenness did make an appearance” (p. 24). Schellenberg argues that the “most conspicuous examples appear from the seventeenth century on” (p. 24). One historical source is Blaise Pascal who recognized that Gods existence is not evident to all. A more recent inspiration for Schellenberg’s argument comes from John Hick who argued that reality is religiously ambiguous and open to both theistic and non-theistic interpretations.

Chapter 4 establishes the main premise: “If a perfectly loving God exists, then there exists a God who is always open to a personal relationship with any finite person” (p. 38). Moreover, given God’s omnipotence, the universe would be designed in such a way that nothing “puts relationship with God out of reach for finite persons” (p. 41). The sceptic could retort and say that nonbelief is a result of some people resisting God. Chapters 5 and 6 address the issue of non-resistant nonbelief, and they make the argument that “we find plenty of clear examples of non-resistant nonbelief” in prehistoric hunter-gatherer societies (p. 77). That is, people who through no fault of their own did not believe in God. Nowadays, due to increasing secularity, there are people who go about their lives without entertaining the existence of God because of particular cultural and social circumstances. This is another case of non-resistant nonbelief, according to Schellenberg.

Chapter 7 addresses another possible objection that would counter the first premise, namely that God is not all-loving. I agree with Schellenberg that a “God that’s less than ultimate would not be” worthy of worship (p. 91). Moreover, we assume that it is intrinsically valuable for a parent to love a child, and it seems as if a similar “parent-child relation exists between God and finite persons” (p. 99). Chapter 8 rounds off the book with Schellenberg answering some more possible objections.

There are at least two possible approaches to respond to ADH. One could question the logical validity of the argument, by arguing that the conclusion, “God does not exist,” does not follow from the premises. Or, one could theologically attempt to identify some greater good that would be secured if God remained hidden. It is interesting, and problematic, that Schellenberg quickly rules out this second approach. A common thread throughout the book is Schellenberg’s resistance to allow theological explanations for God being hidden to enter into the picture. As he writes, “you are required to take all such preaching with a grain of salt and keep our eye on the evidence” (p. 81). To do this, he notes, might “be difficult for someone who believes in God . . . but it’s exactly what’s required to assess the hiddenness argument philosophically” (p. 64). I think that this attempt at closing off theology from offering solutions to the problem of hiddenness is unsuccessful and question begging. Schellenberg asks us to privilege philosophy, but I see no philosophical reasons for excluding theological explanations for God’s perceived hiddenness. This is not to say that theological reasons always trump philosophical ones, but that they should be brought into engagement with each other.

One core idea within Schellenberg’s argument is that the relationship between God and human persons is similar to that of a parent and his/her child. To some extent this is true, and Christian Scripture contains passages that affirm such a view. The idea is that God, like an idealized parent, would always want to be in a loving relationship with his children. More so according to Schellenberg, God being all-powerful and omniscient would be able to accomplish this. Yet, appealing to God’s supreme nature has a flipside. It could be argued that God has reasons, which exceed human understanding, for refraining from obtaining divine-human relationships in order to secure something intrinsically good. This greater good, however, might not be our greater good. It could further be argued that divine silence, manifested in perceived hiddenness, might be an expression of God’ preferred mode of interaction with human beings. This view has been explored by Michael Rea.[1] One could also seek to justify the existence of some forms of non-resistant nonbelief by appealing to divine humility. This has been suggested by Travis Dumsday.[2] Needless to say, there are multiple theological avenues available for approaching ADH. My main point is that it should be permissible to appeal to theological solutions within this discussion, and that philosophical methodology should not come at the expense constructive theology.

The Hiddenness Argument is written in a way that makes it accessible to the general public. Schellenberg equips the reader with the necessary philosophical tools, and he puts forward the argument in a systematic and pedagogical manner. He wants to avoid philosophical “technobable” and he achieves this task. This is an important and foundational contribution to current research on God’s hiddenness, and it will continue to provoke reactions among theologians and philosophers.