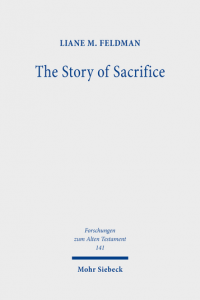 Liane Feldman is Assistant Professor at New York University in the Skirball department of Hebrew and Judaic studies. Feldman earned her PhD from the University of Chicago Divinity School in Hebrew Bible and the ancient Near East.

In The Story of Sacrifice Professor Liane Feldman explores the “literary function” of the priestly ritual materials. Feldman is clear in the introduction that she intends to read and explain these ritual materials “as part of the story”, in conjunction with, not separated from their narrative setting (11-18). Her inquiry is simple: what happens when one assumes that the ritual and narrative texts in the Priestly source were intentionally placed together, and one chooses to read them as literature?

Feldman divides the book into six chapters: Introduction, Moses’s Private Audience: The Construction of Space in the Story World (Exod 40–Lev 7), Yahweh’s Public Performance: The Creation of a Cult (Lev 8:1–10:7), Inside and Outside: Yahweh’s Delineation of Boundaries (Lev 10:8–15:33; Num 7:1–8:4), The Possibility of Decontamination (Lev 16–17), and Conclusion. This review will summarize the book’s contents, follow with a critique, and end with recommendations for the reader.

Her third chapter hones-in specifically on Moses’s ritual labor and its importance in maintaining God’s presence. Feldman convincingly reasons for her principle of ritual innovation: a principle contrary to what typical (especially confessional) readers of Leviticus (and other priestly materials) might expect. She, along with many others, have observed that the priesthood’s installation (Lev 8:1–10:7) strays from the order outlined in Exodus 25–31, 35–40, and Lev 1–7 (68, 79). She clearly maintains that Moses’s deep grasp of the sacrificial system described by God up to this point, gives him the tools to innovate when necessary, which in this case, is caused by the priesthood’s incomplete anointing. Here Feldman’s trustful posture towards the text’s author(s) generates immense insight.

Chapters four and five represent a slight change in emphasis. Chapter four is Feldman’s most ambitious, arguing that various scenes in Leviticus and Numbers occur simultaneously within the story world. She does offer a very attractive reading for Moses and Aaron’s disagreement in Leviticus 10:16–20. Again, she appeals to ritual innovation, noting that Aaron, now a fully-fledged priest, can make logical and situational adjustments to the ritual system, whereas Moses cannot because his term as interim priest is over (116–120). Her argumentation for the simultaneity of Numbers 7:1–88 with Leviticus 10:8–20 and Numbers 7:89–8:4 with Leviticus 11:1 is well-received but may not pack the same punch as do her previous insights (123–133). In the fifth chapter Feldman argues for the Day of Atonement’s non-performance, instead arguing that Leviticus 16 depicts God describing the ritual procedure to Aaron via Moses (155–158). This is comparable to her analysis of Leviticus 1–7, where Moses is simply learning how to administer the sacrifices(s) rather than performing them.

Feldman’s work deserves very high praise for many reasons. First, her desire to depict the ritual texts as legitimate literature yields immense results (3, 5). She contends that modern assumptions of what constitutes literature incidentally exchanges the original “implied reader” for the modern one, leading the modern one potentially to misjudge the literary conventions of other cultures and eras (3). Feldman upholds the logic of the text until she is forced to concede that it is garbled, and this work is full of examples of how this presumption of the text’s coherence clarifies otherwise difficult texts. For instance, Feldman makes sense of the odd sacrifice offered by Moses in Exodus 40:29 arguing that through the current plot development, Yahweh’s location in the heavens, Moses’s default status as Yahweh’s intermediary, and the previous uses of this type of offering in the Pentateuch, one can make sense out of this strange sacrifice (36-38). The current author cannot champion this element of Feldman’s work enough.

This leads to a second praise: throughout, Feldman offers a masterclass in close reading. Perhaps the most outstanding display is found in Feldman’s notion of ritual innovation (35–38, 87–94). In chapter three Feldman explains while Aaron’s mixed-form purification ritual is indeed divergent from instructions in Leviticus 4, it is logical and internally coherent per Aaron’s liminal priestly status. Using this principle of ritual innovation, Feldman also makes sense of Nadab and Abihu’s error. The two brothers’ failure originates in rushing to meet God without God’s invitation (41) whereby they innovate beyond the logical boundaries of the ritual system. Feldman’s belief that the ritual system itself demands innovation (35–37) provides a rich springboard for further research.

Third, Feldman, at times working against the history of scholarship, argues convincingly for the Priestly source’s democratization of the cult (48-49, 56–59, 105, 133). Rather than reading Leviticus 1–5 as an instruction manual for priests, Feldman uses the principles of narratology to argue that the implied reader, presumably a lay Israelite, is brought into the private conversation of God and Moses and learns the cultic procedures before the priests themselves (48). Moreover, the Israelite-laity become central to the cult itself not only as imaginative implied readers but as the offerors who slaughter their own sacrifices before handing the animals off to the priest (56).

A fourth commendation concerns Feldman’s inclusion of ritual background information to the benefit of those unfamiliar with the Bible’s ritual material. This is most obvious in pages 49­–65 where she walks the reader through a typical sacrificial procedure, using the careful explanation itself to argue for the intentional and obvious democratization of the cult.

The current author does have a few very minor critiques. First, with her focus on the narratology of ritual procedures, a test case showing the difference between ancient written ritual and its real-world performance would have greatly benefited the persuasiveness of her argument (5–15). Second, while the author is favorable to Feldman’s translation of אכבד – “I will be present” – they were left desiring a more thorough explanation (104).

For those who are mistrustful of a source-critical-first approach which assumes the unreadability of the Bible, Feldman offers a way forward. Because of her attempt to combine both historical-critical methods and literary approaches, often disconnected in Biblical scholarship, the field will benefit greatly from this book. Her model of ritual innovation alone providing a way to make sense of seeming inconsistencies in the text is worth the purchase alone (5). In a similar vein, her reasonable methodological assumptions do justice to both the academy and faith communities trying to understand the text (25)

With that said, the book, printed by one of the field’s most prestigious publishers, is intended primarily for the scholar. However, Feldman’s lucid writing and consistently clear explanations makes her work accessible to the diligent student. The careful undergraduate will begin to see just how fragmented Pentateuchal scholarship is, which only underscores Feldman’s successful attempt at bridging the gap previously mentioned. The reader will obtain the highest yield from this work if they gain a familiarity with both Leviticus and perhaps Milgrom’s commentary on Leviticus published by Fortress Press. 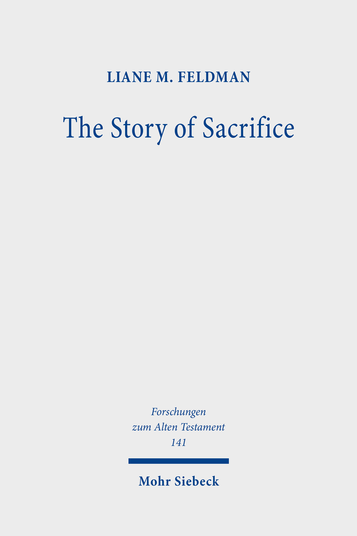