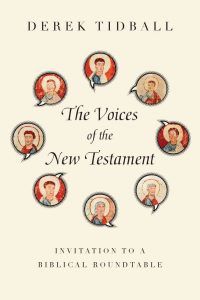 Derek Tidball is a British evangelical scholar. He previously served as the principal of the London School of Theology and is currently visiting scholar at Spurgeon’s College in London.

The Voices of the New Testament is a New Testament [NT] theology aimed at “those who will never pick up the heavier” NT theologies (p. viii). Hence, it is quite brief (as NT theologies go) and intentionally light on footnotes and secondary sources. It seeks to draw together the major theological foci of the NT authors in a way that both distinguishes their unique emphases and preserves the unity between them. In a word, the book attempts to discern the unity and diversity of the message of the NT, such that at the end of his study, Tidball’s conclusion is that “[t]he New Testament writers are like instruments in an orchestra playing one glorious and harmonious melody. Each instrument contributes to that one tune” (p. 257).

As an attempt to defend the need for another NT theology amidst a growing number today, Tidball contends that his approach or method is unique. Whereas many NT theologies focus on more traditional approaches—authorial, developmental, thematic, or systematic—Tidball utilizes a schema he claims was suggested by George Caird in his NT theology wherein he imagines the nine authors of the NT having a roundtable discussion, along with a chairperson and observer. The function of the chair is not to speak for the biblical authors but to moderate the discussion, and the function of the observer is to bring to light the ways in which major questions of NT theology have been dealt with throughout the history of the church. The result is a NT theology with a very different feel; far from arid, it is engaging and conversational in style and tone.

The book’s strength lies in its accessibility and engaging style. The book is especially valuable for those interested in an introduction to the major questions of NT theology, but who are wary of spending money or time reading other, more massive NT theologies. Thus, the book would be a useful resource for undergraduate theology students or even for a pastor to read and recommend to congregants. Further, the conversational style—first- and second-person pronouns are ubiquitous—provides a readability often missing in other NT theologies. Finally, for those wishing to use this book as an entrée into the larger, more traditional NT theologies, Tidball provides a selective bibliography of NT theologies in the indices.

Another strength of the book is its ability to bring together diverse voices on various topics. This was the book’s stated goal, and it succeeded. As an evangelical scholar, Tidball (rightly, in my opinion) sees fundamental theological agreement among the NT authors, even where theological diversity appears. For instance, he argues that there is no substantive disagreement between the Synoptic Gospels and the Gospel on John on the question of Jesus as the Son of Man (pp. 60-61), between Paul and James on the question of justification by faith (pp. 188-89), or between the NT authors on the question of the delay of the Parousia (pp. 232-33). More liberal NT scholars would contend that this approach doesn’t do justice to what they perceive as divergent and even contradictory theologies of the NT authors. But, without blunting or diminishing the diversity, Tidball convincingly contends that the NT authors shared complementary but not contradictory beliefs.

While the disadvantage of a brief NT theology is that the author is not able to interact with scholarship on a number of issues, this disadvantage is offset in part by the imaginary observer in the conversation. The observer’s speeches function essentially as brief excurses on points of scholarly disagreement, such as the rise of Trinitarian monotheism from Jewish monotheists (pp. 81-82), the relationship between the Jesus of history and the Christ of faith (p. 101), the nature of early Christian belief in resurrection (pp. 121-22), models of the atonement (pp. 132-34), the pistis Christou question in Pauline scholarship (pp. 140-41), the identity of Israel in Romans 9-11 (pp. 198-99), the mission of the church (pp. 210-11), the meaning of Jesus’ Olivet Discourse (pp. 227-29), and various views on the millennium (pp. 244-45). These excurses do not exhaust the number or depth of the issues, but they give the reader a sense for where the key debates lie.

With this said, the brevity of the book, which is one of the book’s strengths, is also a weakness. This isn’t a detraction from the value or the success of the book, especially since Tidball is aware of this weakness (p. vii). Nevertheless, for the sake of clarity regarding the nature of this work as a NT theology, it should be said that there are many debates in NT scholarship left untouched due to its brevity. More than this, the aim of the book is in some sense to lessen any interpretive bias so as to let the biblical authors speak for themselves as much as possible (p. 5). While this is a salient aim, it can be somewhat misleading, for actually Tidball (necessarily) interprets all along the way! For instance, one paragraph is allotted Paul at the roundtable to summarize his understanding of the “flesh” and its association with sin (pp. 31-32). In this brief context, the flesh is given “earthly nature” as a gloss, but because of the brevity of the section, the reader is left wondering what Tidball means by “earthly nature.” Is this the same as a “sin nature”? Is the flesh an ontological or salvation-historical reality? Again, when Tidball begins to unpack Paul’s doctrine of justification—it receives two pages (pp. 139-40)—precious little is mentioned regarding different understandings of justification, and nothing is said about the righteousness of God, the imputation of Christ’s righteousness, or judgment according to works. Further, when Tidball explains the meaning of Paul’s phrase “works of the law,” he claims that Paul was concerned about those works that marked the Jews out as the people of God. However, given the brevity of the section and the lack of interaction with scholarship, no clue is given the reader that the answer placed in Paul’s mouth at the roundtable is actually debated, especially given the rise of the New Perspective on Paul over the last 40 years. Hence, despite the book’s stated aim of “minimal” interpretation, interpretations are (necessarily) advanced, but because of the book’s intent to achieve brevity and limited interaction with scholarship, the reader may not be aware of the breadth or depth of the debates at hand.

In conclusion, The Voices of the New Testament succeeds as a NT theology aimed at those who may not otherwise read one. Tidball’s approach is refreshing and engaging, and his excellent grasp of the NT authors’ emphases allows the reader to gain a speedy yet summative sense of the basic questions and answers within NT theology. It is hoped that this book will be used in the church and classroom as a tool to appreciate the unity and diversity of the NT.