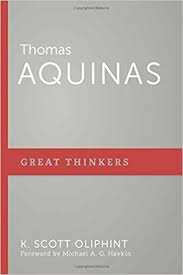 Scott Oliphint serves as professor of apologetics and systematic theology at Westminster Seminary in Philadelphia. He studied directly under Cornelius Van Til, the father of present-day presuppositional apologetics. Oliphint champions Van Til’s view in the twenty-first century through his publications, such as, Covenantal Apologetics: Principles and Practice in Defense of Our Faith; Revelation and Reason: New Essays in Reformed Apologetics; as well as the editor for numerous books on Cornelius Van Til, including: The Defense of the Faith; Christian Theistic Evidences, and Common Grace and The Gospel. His latest contribution, Thomas Aquinas, is one book in a series of publications reviewing “Great Thinkers,” which seek to understand and evaluate influential theologians and philosophers throughout church history.

At the outset of the book, Oliphint states his interest in this book is to argue that Reformed Thomism cannot be reconciled with historic Reformed theology. “Whatever ‘Reformed Thomism’ might be,” says Oliphint, “or might mean, in our current context, it cannot be a synthesis of biblically foreign Thomistic teachings and a consistent, biblical theology” (p. 3). He believes Reformed theologians either cannot incorporate Aquinas’s views into their theology, or, if incorporated, Thomism must be “reworked and reoriented—‘reshaped,’ as it were—in order to be consistent with a Reformed theological context” (p. 2). Moreover, since Aquinas’s literature is so vast and voluminous, Oliphint narrows the scope of his analysis to two topics: “the foundation of existence (principium essendi), which is God himself, and the foundation of knowledge (principium cognoscendi), which is God’s revelation” (p. 2). After a brief overview and introduction, Oliphint divides his work accordingly, offering one chapter on each principium and a conclusion.

Oliphint addresses the principium cognoscendi by outlining Aquinas’s view of reason and revelation, the problem of self-existence, epistemology and metaphysics, and the praeambula fidei (preambles of the faith). For Aquinas, there is a twofold truth of divine things. The first is by way of natural reason, and the second by way of revelation. “Thomas thinks that natural reason forms the foundational structure of which revelation is the superstructure, in part because of his understanding of certain biblical passages” claims Oliphint (p. 13). In particular, Aquinas bases his natural theology on Romans 1:19, arguing, “It is written (Rom. 1:19), That which is known of God, namely, what can be known of God by natural reason, is manifest in them” (p. 13, emphasis in original). Thus, Aquinas believes natural reason is able, by itself, to demonstrate God’s existence and obtain knowledge of him (p. 13). Oliphint’s primary critique of Aquinas in this chapter is epistemological. He claims that Aquinas has an anemic view of the noetic effects of sin and the proper function of “natural reason.” Oliphint quotes one person, noting, “Whereas the medieval doctors had assumed that the fall affected primarily the will and its affections and not the reason, the Reformers assumed also the fallenness of the rational faculty” (p. 33). Therefore, Oliphint responds to each level of Aquinas’s argument, namely, he addresses: 1) the relationship between the noetic effects of sin and natural theology; 2) faults he finds in Aquinas’s exegesis of passages such as John 1:9 and Romans 1:19, namely, he believes they do not allow for natural theology; and 3) the self-evident knowledge of God via the sensus divinitatis (i.e., Oliphint believes the rebellious natural man reject this third type of knowledge because it is the only sure form of knowledge, not a form of knowledge derived from natural theology or natural reason, since he considers both of these modes unsure forms of knowledge). Oliphint continues this critique throughout his chapter on the principium essendi where he discusses God’s existence, nature, knowledge, and attributes (pp. 55-77). He also evaluates the classical attributes of God (e.g., the prospect of affirming classical theism), in particular Eleonore Stump’s models of simplicity. We will now proceed to a brief evaluation.

First, Oliphint interacts significantly with classic texts by Aquinas and demonstrates a thorough knowledge of secondary literature in Thomisitic studies. Conceivably, some Thomists will be concerned that Oliphint has not read a sufficient amount of primary and secondary literature in Thomistic studies. Such a Thomist need not be concerned; for Oliphint demonstrates a noteworthy depth in the primary and secondary sources, including his remarkable breath of knowledge concerning sundry scholarly debates amongst Thomists. For example, Oliphint interacts well with a debate over the praeambula fidei, noting that one camp believes Aquinas offers a purely philosophical “preambles of the faith,” and those following Gilson, who argue that Thomas’s philosophical theology is primarily theological (p. 26). Therefore, critics of Oliphint should not dismiss his criticisms at the level of insufficient knowledge or improper dedication to the plethora of primary and secondary Thomistic resources.

Second, Oliphint seems rightly to understand significant differences between Aquinas and numerous Reformed theologians. However, in the conclusion of Oliphint’s book he offers an inadequate understanding of the primary differences between Thomism and Molinism and the nature of God’s knowledge. He claims that Molina’s view of middle knowledge (scientia media) is based upon a Thomistic understanding of God’s knowledge of future contingent things (p. 125). Unfortunately, this is a misreading of both Aquinas and Molina. Aquinas did not claim, contrary to Molina, that God’s knowledge of future contingents is based upon actual persons or events, and the way those individuals would freely act in a given situation. Namely, Aquinas’s view does not fall prey to the grounding objection leveled against middle knowledge. For Aquinas, God knows himself perfectly; therefore, God knows his causality perfectly (including future contingent events and beings) and his knowledge is in no way dependent upon future contingent free choices. Therefore, unlike Molinism, Thomism does not fall prey to the grounding objection because God is the ground of his knowledge. Second, Molinism allows for a discursive element to God’s knowledge, even if it is a logical discursiveness, because of the way middle knowledge functions and the means God obtains his foreknowledge of the actual world. Aquinas would reject this view of God’s knowledge, first, because God is Pure Act and lacks the ability to change. Second, since God’s being is the proper object of his knowledge (which lacks the ability change), not mutable future contingent objects, his knowledge is not grounded on mutable beings and does not require any change in the act of cognition. In brief, these differences between Aquinas and Molina on this topic are not one of degree, but of kind.

Nonetheless, Oliphint offers a strong reminder to theologians that our view of God and revelation must first and foremost be grounded upon Scripture, not philosophical reasoning. His consistent interaction with the primary and secondary literature of Aquinas demonstrates that Reformed theologians in particular, whether they embrace Aquinas or not, must filter Thomas’s thought through biblical theology and the confessional standards of Reformed thought (p. 126). In that sense, Oliphint provides not only a clear and throughout explanation of Aquinas, but a reminder that Scripture must be our source-criterion and ultimate authority for all Christian theology, philosophy, and apologetics.