The Care of Souls: John Calvin’s Shepherding Ministry
Marcus J. Serven
Marcus J. Serven (Th.M, D.Min., Covenant Theological Seminary) retired in 2016
after serving for nearly thirty-seven years in full-time pastoral ministry. Pastor
Serven ministered at congregations within several Presbyterian denominations, and
he is currently a member of the Presbytery of the Midwest (OPC). He wrote his
doctoral dissertation, Seeking the Old Paths: Towards a Recovery of John Calvin’s
Pastoral Theology Amongst Reformed and Presbyterian Pastors Today (2011),
under the direction of noted church historian David B. Calhoun.

Abstract: Many Christians today have distinct impressions of who John Calvin was, but most have never read a single line from his Institutes of the Christian Religion, or benefited from the careful exegesis found in his Commentaries on the Bible, or reflected upon a single salient point from one of his many published sermons. In brief, the reformer John Calvin (1509–1564) has been misinterpreted, misread, and misunderstood.1 He is, perhaps, best known for his views on the doctrines of election, predestination, and reprobation.2 He is also known for his pivotal role in the prosecution of the arch-heretic Michael Servetus (1511–1553) who rejected the Trinity and the deity of Jesus Christ.3 But none of these disconnected pieces of information can demonstrate, in my opinion, the true character of the man. And so, who really was John Calvin? Hughes O. Old, a noted scholar of Calvin’s life and
theology, states the opinion that, “John Calvin is chiefly remembered as a biblical scholar and a systematic theologian.”4 Clearly, Calvin distinguished himself through his theological writing and teaching ministry. However, he also was the preeminent pastor of the city of Geneva during the time of the Protestant Reformation. John T. McNeill notes, “Jean Daniel Benoit, the expert on Calvin’s work in the cure of souls, states boldly that the Genevan Reformer was more pastor than theologian, that, to be exact, he was a theologian in order to be a better pastor. In his whole reforming work he was a shepherd of souls.”  Thus, it is Calvin’s shepherding ministry that will be
explored in this article—in particular, his pastoral care of souls.
Key Words: John Calvin, shepherding, Reformation, pastoral care, pastoral ministry 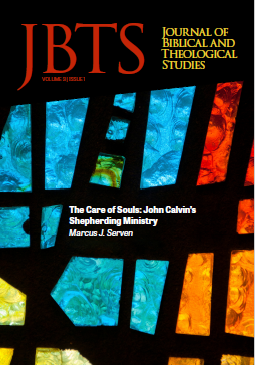