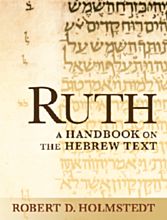 Ruth: A Handbook on the Hebrew Text is an excellent volume in the Baylor Handbook on the Hebrew Bible Series, providing students and professors with a detailed grammatical discussion of the Hebrew text of the book of Ruth.  Robert D. Holmstedt is the Professor of Ancient Hebrew and Northwest Semitic Languages at the University of Toronto.  He received his Ph.D. from the University of Wisconsin-Madison in Hebrew and Semitic Studies.  Holmstedt has published and introductory Hebrew grammar entitled Beginning Biblical Hebrew: A Grammar and Illustrated Reader (Baker, 2013) in addition to many other publications related to Hebrew grammar and especially the relative clause in ancient Hebrew.

Holmstedt wrote this handbook “with both the intermediate student and the advanced researcher in mind” (p. 2).  That being the case, Holmstedt provides a rich and engaging treatment of the Hebrew grammar of Ruth that is accessible to students still mastering basic Hebrew morphology and syntax.

After a brief introduction, Holmstedt spends three sections [corresponding to chapters] discussing his approach to Hebrew grammar, the role of linguistic features in dating the book, and the use of language to add dramatic “color” to characters in the narrative.  Section 2 [§2] (pp. 3-16) proves helpful for students and professors who may be familiar with a certain “system” of Hebrew, but who are not familiar with the particular descriptions Holmstedt will use throughout the handbook.  In some sense, he provides a short syntactical grammar of the lingo and abbreviations he uses throughout the handbook.

In §4 (pp. 41-49), Holmstedt discusses how the narrator of Ruth uses seemingly “incorrect” language to add “color” and dramatic effect to the characters.  Holmstedt’s section adds to the beloved nature of the book of Ruth by arguing that the narrator intentionally used language that would enhance character development.  Since Naomi spent nearly ten years in Moab and Ruth was a Moabitess, Holmstedt argues that what some scholars presume to be mistakes or anachronistic archaisms in the Hebrew Bible are intentional devices to further develop the characters.  As such, Holmstedt provides another basis for seeing the narrative beauty of the book of Ruth.

In the remainder of the book, Holmstedt walks through the Hebrew text of the book of Ruth verse-by-verse, phrase-by-phrase.  He has broken the book into a drama, labeling each section as “Act 1,” “Act 2,” “Scene 1,” “Scene 2,” etc.  In each section, Holmstedt provides a brief introductory commentary to the section, his own translations based on grammatical and syntactical analysis, and then he proceeds to walk through the Hebrew text phrase-by-phrase.

Holmstedt’s grammatical discussions are thorough and engaging.  He provides examples from other literature that are more common to the modern reader to help one understand the Hebrew grammar (e.g., Shakespeare’s ‘to be or not to be’, p. 52).  In addition to Holmstedt’s discussion of the syntax, he regularly references standard Hebrew grammars so that students and scholars can follow up with additional background on the topics he discusses.  He cites Waltke-O’Connnor most often, but also include standards like Gesenius and Joüon-Muraoka.  In addition to citing standard grammars, Holmstedt also refers readers to the standard Ruth commentaries for further study.

While Holmstedt’s grammatical discussions are thorough, they are not overly cumbersome.  By this, I mean that when the Hebrew text of Ruth inevitably repeats certain features, Holmstedt will reference back to the previous section so that students are not bogged down with repetitive information.  Likewise, as the book moves forward, Holmstedt reduces the amount of attention given to certain features that have been discussed already.  This aspect of Holmstedt’s book subconsciously allows the reader to begin practicing what he/she has learned earlier in the book.  For example, in keeping with his view of character “coloring,” (pp.41-49) Holmstedt comments on the “apparent masculine suffix referring to feminine antecedents” in Ruth 4:11 (p. 202).  However, in his comment, he merely refers the reader back to Ruth 1:8.  The student can either return to Ruth 1:8 for a full discussion, or, by this point in the narrative, the student will know that the narrator of Ruth often (mis-)uses masculine or feminine suffixes for character development.

Holmstedt’s handbook proves to be a clear and helpful study of the Hebrew grammar of Ruth if one is familiar with his system of identifying grammar.  Holmstedt helpfully provides a brief discussion of how he communicates grammatical features in his introduction (pp. 3-16), and yet throughout the handbook, he uses abbreviations that may require the reader to return to the introduction to know to what Holmstedt is referring.  An example of this would be his use of “NP,” “VP,” and “PP” for “noun phrase,” “verb phrase,” and “prepositional phrase” respectively.  While his shorthand is helpful for succinct discussions, some students may need to decipher these simple abbreviations before digesting the material.  Holmstedt also uses terminology like “complements” and “adjuncts” that require one to be familiar with his system to describe Hebrew grammar before fully understanding his discussions.

Holmstedt’s view on Hebrew word order proves to be a difficulty of this volume.  Holmstedt argues that the typical word order in Hebrew is subject-verb rather than verb-subject (pp. 11-16).  He argues that for the verb to appear first in a Hebrew sentence, something must “trigger” the change (p. 11, 55 and throughout).  In a narrative like Ruth, this explanation of “constituent movement” proves cumbersome.  Hebrew narrative word order appears most often as verb-subject, and so Holmstedt must regularly explain away the typical Hebrew word order with his complex notion of “triggered constituent movement.”  For those familiar with his entire system to explain Biblical Hebrew, this word order dilemma may not be cumbersome.  However, for most readers, no reason exists to explain away the typical Hebrew narrative word order of verb-subject.

Despite some minor difficulties in how Holmstedt explains his system of Hebrew, this volume will prove to be a fine addition to the library of both intermediate Hebrew students and advanced scholars.  For the intermediate student, Holmstedt’s vibrant discussions will aid in understanding Hebrew grammar as well as help the student enjoy the text of Ruth.  For the advanced scholar, Holmstedt presents an additional “system” of Hebrew grammar that enhances one’s understanding of the Biblical Hebrew.  This volume will benefit both students and scholars with an in-depth discussion of Hebrew grammar and syntax as well as some lexicography and etymology of obscure words.  Overall, Holmstedt provides students of Biblical Hebrew with a technical, but accessible study of the text of the book of Ruth.