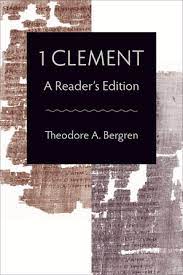 The letter now known as 1 Clement is an important early Christian text that has the potential to shed light on Jesus followers in the areas of Rome and Corinth, to enable readers to see more clearly what created division in early Christian communities, to observe how one author or group of authors attempts to bring about unity, and to illustrate both the variety of ways in which early Christians could interpret scriptural texts and the variant forms in which scripture could be quoted. Yet it is a long letter that can be challenging for the uninitiated to read in its entirety. This may be true even when 1 Clement is translated into a modern reader’s first language, never mind the original Greek. Theodore Bergren’s 1 Clement: A Reader’s Edition offers a chance for intermediate Greek readers who likewise know English to read 1 Clement without needing to look up every unknown word in a lexicon. Bergren is an emeritus professor in the Religious Studies Department at the University of Richmond, who has conducted significant research on the Latin works of 5–6 Ezra while also editing key indexes to be used when studying the Latin translations of the New Testament and Apostolic Fathers. His wide-ranging linguistic capabilities make him well-placed to edit a volume like the one currently under review.

Bergren keeps the introduction brief, but it is worth highlighting several important points in this concisely written section. He dates the letter of 1 Clement to the latter decades of the first century CE and leaves open the possibility that the traditional dating in the late 90s is most likely (p. vii). The reason for the letter concerns turmoil that has erupted in the Corinthian church, probably concerning a group of younger members who marginalized members of the established community hierarchy. Bergren rightly notes 1 Clement’s familiarity with Greek Jewish scriptures and the author’s likely knowledge of some documents now included in the New Testament. An appendix contains a fuller list of citations and allusions in the letter (pp. 187–190). The author of 1 Clement remains unknown, but the text came to be associated with Clement of Rome in the centuries after it was written. The introduction also wrestles with the authority that 1 Clement had among early readers in Christian communities across the Roman Empire.

After covering these and other traditional introductory issues regarding 1 Clement, Bergren introduces the reader’s edition of 1 Clement in more detail. A Greek text of 1 Clement appears on the left-facing page, while English glosses are organized verse-by-verse in order of appearance on right-facing pages. The Greek text comes from Lightfoot’s second edition of 1 Clement (1890) with slight emendation. The glosses include the lexical form of the word, the parts of speech, and definitions. Bergren argues that students can avoid the incessant and often unhelpful task of looking up words in dictionaries. They can focus instead on the more profitable tasks of translating, parsing, and grammatical study. As he rightly notes, students of biblical studies may be familiar with this way of reading from using other reader’s editions, such as those produced by the United Bible Societies (Donald R. Vance, George Athas, and Yael Avrahami, Biblia Hebraica Stuttgartensia: A Reader’s Edition [Peabody: Hendrickson, 2015]; Barclay M. Newman and Florian Voss, The UBS Greek New Testament: A Reader’s Edition [Stuttgart: German Bible Society, 2015]). Bergren’s selection of 1 Clement is significant because it enables students to become more familiar with “the historical and ideological horizons” of early Christianity and forces students to translate a text that is not as well-known and thus not as easily memorized as the New Testament (pp. x–xi).

The text of 1 Clement is easy to read with comfortably wide spacing between each line. The volume is likewise simple to navigate. Since 1 Clement: A Reader’s Edition contains only a single text, the physical size of the book makes for a pleasant reading experience because it is not as bulky as some reader’s editions of larger text collections. It can easily be held and maneuvered for accessible study. While the Greek font that is utilized appears somewhat old-fashioned, the selection of the gloss words has been astutely made. Words that are not found on the adjacent right-facing page can be looked up in a small lexicon at the back of the book (pp. 173–185). The brevity of the introduction encourages immediate engagement with the Greek text of the letter and does not pull the reader’s attention away to other issues in the study of 1 Clement. A bibliography offers additional editions to explore and opportunities to study how other scholars have discussed 1 Clement (pp. 191–193). Yet the focus of this edition is clearly on reading the Greek text of 1 Clement. For those nearing the end of their second year of Koine Greek study, this edition of 1 Clement will be practical and offer useful opportunities to expand one’s knowledge of the Greek language, early Christian scriptural quotation, and the experiences of believers living in Rome and Corinth.

The volume is thus to be highly recommended for students of Greek who are interested in expanding their reading horizons in early Christian literature, for professors who teach intermediate to advanced Koine courses and are considering reading materials, and to libraries who cater to such audiences. Bergren’s edition joins the reader’s editions of the Apostolic Fathers edited by Alan Bandy (A Greek Reader’s Apostolic Fathers [Eugene: Cascade, 2018]) as well as Shawn Wilhite and Jacob Cerone (Apostolic Fathers Greek Reader: The Complete Edition [Wilmore: GlossaHouse, 2019]) in providing those who are interested in the first and second centuries of Christian history with manifold opportunities to introduce themselves to the Greek texts of the Apostolic Fathers with relative ease. Bergren’s edition of a single text is much to be welcomed because of its light weight, easy reading, and affordable price. This reviewer would welcome other single-volume editions on, for example, 2 Clement, the letters of Ignatius, or the writings related to Polycarp from Bergren, the Catholic University of America Press, or preferably both. In any case, this is certainly an exciting time to be engaged in study of the Apostolic Fathers. Bergren’s volume on 1 Clement is a helpful and important addition to the resources available for such study.