James E. Dolezal, All That Is In God: Evangelical Theology and the Challenge of Classical Christian Theism. Grand Rapids: Reformation Heritage Books, 2017, pp162, $18. 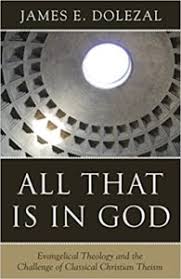 James E. Dolezal is an assistant professor at Cairn University’s school of divinity. He has previously published on the doctrine of divine simplicity. In his new book, All That Is In God (ATIIG), Dolezal offers a concise defense of classical theism. On classical Christian theism, the triune God is a necessarily existent being who is simple, immutable, impassible, and timeless. ATIIG contains seven chapters that take the reader through these classical attributes and the doctrine of the Trinity.

ATIIG also offers a critique of contemporary evangelical attempts to modify or reject the classical understanding of God. Various contemporary evangelical theologians and philosophers have rejected this understanding of God in favor of a God who enters into a genuine give-and-take relationship with creation. Dolezal labels such thinkers “theistic mutualists.” Dolezal notes that theistic mutualism comes in a variety of forms such as process theism and open theism, but his main target in ATIIG tends to be Calvinists and social trinitarians. It is worth noting that the term “theistic mutualism” is a neologism of Dolezal’s own making. Since theistic mutualism applies to such a broad range of theological views, one might worry that the term is too course-grained to demarcate positions in theology. For example, the underlying metaphysical and theological assumptions within the process theology of Charles Hartshorne are quite different from that of Karl Barth, and yet they are both classified as theistic mutualists in Dolezal’s eyes.

Dolezal starts ATIIG by explaining that this is a work in contemplative theology, and not biblical theology. According to Dolezal, biblical theology is not well-suited for the task of theology proper because biblical theology treats God like a historical character in the narrative of redemption. Instead, Dolezal asserts that one must take the contemplative approach to theology which treats God as ahistorical (p. xv). At this point, one might worry that Dolezal is starting his project with the God of classical theism and then turning to the Bible for proof-texts. One might be worried indeed that this is Dolezal’s approach upon surveying the bibliography of ATIIG. In the bibliography, one will see a preponderance of references to works on Thomistic metaphysics, and yet only one reference to a biblical scholar—D. A. Carson. To be sure, Dolezal will not be offering any engagement with biblical scholars like Richard Bauckham, Walter Brueggemann, Terence Fretheim, John Goldingay, and R. W. L. Moberly. I gather that such biblical scholars are excluded from the conversation because they do not take the contemplative approach to theology.

This is unfortunate since the work of these scholars is a major motivation for believing that the God of the Bible is mutable, passible, and temporal. So one might wonder if Dolezal is ignoring these biblical arguments. Dolezal will deny that he is ignoring these biblical arguments. As he explains, the biblical passages that portray God as mutable, passible, and temporal are easily explained away as metaphorical and anthropomorphic (cf. pp. 85-86). In other places, Dolezal assures us that Thomistic scholars have the correct interpretation of passages like Exodus 3:14 (p. 46). Apparently, there is no need to discuss what Old Testament scholars think of the divine name in Exodus 3 because the contemplative theologians have it covered.

Throughout ATIIG, Dolezal complains that theistic mutualists are unable to maintain the absoluteness and infinite fullness of God’s being. I am not entirely sure what Dolezal means by the terms absoluteness and fullness of being, but these terms play a large role in Dolezal’s argument in ATIIG. At times these terms seem to be interchangeable with divine simplicity and immutability (cf. pp. 7-8, and 137). However, in other places, these terms are meant to motivate these doctrines (chapter 3). Hopefully, fullness of being is not identical to divine simplicity and immutability. If it is, the arguments in chapters 2 and 4 are question begging. In these chapters, Dolezal argues that theistic mutualism is incompatible with divine simplicity and immutability. Yet a few of his remarks make it sound like he is arguing that theistic mutualism is incompatible with the absolute fullness of God’s being. A definition of these key terms would help a reader see if Dolezal is begging the question, or offering a substantive argument against theistic mutualism.

The term infinite is given a large role as well in Dolezal’s arguments for classical theism. Yet infinity does not receive a definition until page 87 when most of the arguments have already been given. On page 87, ‘infinity’ seems to mean that God is without limitations. Yet in several other places, Dolezal suggests that infinite has a meaning that is analogical to a transfinite mathematical concept (p. 136). These are very different conceptions of infinity, and neither clearly leads to classical theism. This is evidenced by the fact that the definition of divine infinity as “without limits” plays a key role in arguments for pantheism during the 17th and 18th Century pantheism controversy (cf. Philip Clayton, The Problem of God in Modern Thought). Further, the mathematical concept of the actual infinite does not obviously have any theological place here as evidenced by the fact that Georg Cantor (the father of transfinite math) did not predicate an actual infinite to God. Instead, Cantor says that there is a different concept of infinity that applies to God: perfection.

There is a further problem related to divine infinity. Dolezal continually claims that divine infinity is the classical understanding of God; but this is demonstrably false. Philosophers like Katherin Rogers, Philip Clayton, and Graham Oppy have pointed out that theologians were wary of predicating infinity of God prior to the scholastic era because of the negative connotations with infinity. Once scholastic thinkers like Aquinas and Scotus start predicating infinity of God, there is no clear agreement between them over the definition of this attribute. So Dolezal needs to offer the reader a clear explication of divine infinity in order to establish its proper place in classical theism. (For more on infinity, see Michael Heller and W. Hugh Woodin, eds., Infinity: New Research Frontiers.)

Whatever terms like absoluteness, infinity, and fullness of being mean, Dolezal thinks that theistic mutualists are incapable of maintaining them. Hence, Dolezal says theistic mutualism entails idolatry. The accusation of idolatry is a recurring theme throughout the book (cf. p. 6-7, 58). It is a curious accusation, since the God of theistic mutualism is a necessarily existent triune being who is the omnipotent and omniscient Creator of all contingent reality. Of course, the God of theistic mutualism acquires accidental properties like “being the Creator.” For Dolezal, this entails that the mutualist God is an idol. I must confess that this is a rather impressive idol. Much more impressive than the idols that Isaiah rejected. However, Dolezal argues that such a God is an idol because this God acquires being and actuality from His creatures when He acquires accidental properties like “being the Creator” (p. 97).

At this point, it is worth noting two things. First, throughout ATIIG, Dolezal uncritically accepts Aristotelian-Thomistic metaphysics, and offers little explication of these philosophical concepts. One will need to read a further source, like Edward Feser’s Scholastic Metaphysics: A Contemporary Introduction, in order to see just how much Thomistic metaphysics is being assumed in Dolezal’s work. Second, throughout ATIIG, Dolezal pays little attention to the essentialist metaphysics of his opponents. At times, the caricatures of his opponents’ metaphysics are painfully apparent. Allow me to illustrate.

According to Dolezal, contemporary theistic mutualists tend to say that God’s being refers to God’s essence or nature. Dolezal complains that mutualists just do not understand ontology because this is not the true, existential meaning of being that one finds in the scholastic metaphysical tradition. On this scholastic understanding, being refers to actuality or any participation in the act of existing (pp. 7-8). Much like with Dolezal’s handling of biblical passages, there is no need for debate with contemporary metaphysicians on these sorts of things because the Thomists clearly have the right metaphysical story. As Dolezal sees things, theistic mutualists have unwittingly embraced a rudimentary form of process theism instead of affirming the true notion of being (pp. 7-8).

To be clear, the theistic mutualists that Dolezal critiques do not unwittingly embrace a rudimentary form of process theism. For example, one of Dolezal’s targets is John Feinberg. In Feinberg’s No One Like Him, an entire chapter is devoted to critiquing process theism. Feinberg also articulates the essentialist metaphysics that he is working with in his theology. However, Dolezal shows no clear understanding of the essentialism his opponents embrace. Thankfully, Jay Wesley Richards’s The Untamed God: A Philosophical Exploration of Divine Perfection, Simplicity, and Immutability spends two chapters laying out an essentialist metaphysics before critiquing the doctrines of God found in process theology, Barthian thought, and classical theism. Readers who are interested in understanding the clear and widely acknowledged differences between theistic essentialism and process theology should start with Richards’s book.

ATIIG is intended for popular evangelical audiences. To his credit, Dolezal has given us a concise articulation of classical theism that can serve as a primer for students and pastors. This will be ideal for readers of this journal who are looking for an introduction to the classical doctrine of God and its place within evangelical theology. However, more advanced students will need to look elsewhere for a defense of classical theism that fully engages with opponents to the classical doctrine of God. For these advanced students, I recommend Katherin Roger’s Perfect Being Theology.

Pastors may also wish to find a more charitable introductory text to classical theism that does not accuse others of idolatry. To be fair to Dolezal, I have seen some of Dolezal’s Calvinist interlocutors accuse open theists of idolatry. I have also witnessed open and relational theists accuse classical theists of idolatry. So the charge of idolatry is being thrown around by all sides within contemporary evangelical theology. Perhaps evangelical theologians should lay off the idolatry card, and focus more on the arguments.