Kynes, Will. An Obituary for “Wisdom Literature”: The Birth, Death, and Intertextual Reintegration of a Biblical Corpus. Oxford University Press, 2019. 352pp. $78.24, hardcover. 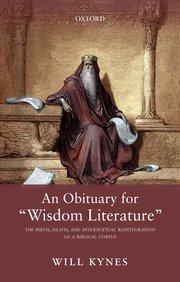 An Obituary of “Wisdom Literature” divides into four sections: Introduction, Historical Metacriticism, Genre Methodology, and The Reintegration of Wisdom Literature. The introduction establishes Will Kynes’ methodological critique of wisdom literature. Wisdom literature is a modern scholarship invention and Johann Bruch is the Wellhausen of Wisdom (p. 4). Kynes’ genre-method combines theories of a constellation metaphor and turns the referent into a three-dimensional reference (p. 12). Scholars should put to death wisdom literature as a genre, then reevaluate wisdom: categories, genre, schools, and concept (p. 18). Wisdom must first be understood as a concept and not a category that unites other corpora together (p. 22).

In Section II, Kynes develops his own genre methodology whereby he argues for the constellation of text approach. Genre patterns a text into a network for explanatory power and interpretive influence beyond the sum of their parts (p. 113). Genre is a formalized shorthand of intertextuality.  Kynes stipulates, “Genre features do not exist in texts as much as between them and therefore not in their authorial creation but in their readerly comparison” (p. 115). Thus, the constellation approach moves the text to a multi-dimensional approach and sees text participating in genres without ever belonging to them (p. 124). In section three, Kynes applies his methodology on how wisdom literature should be reintegrated into the canon through analyzing the intertextual network of Job, Ecclesiastes, and Proverbs.

Will Kynes charts a new path for the study of “wisdom literature” for the 21st century, but unlike previous attempts Kynes’ inventive approach assesses the previous categories. Kynes brings to light Johann Bruch’s influence on the formation of the so-called wisdom genre and intends to uproot his false methodology that developed from this scholarly construct. An Obituary of “Wisdom Literature” is primarily a methodological treatment of wisdom literature as genre.

The present work contributes in two distinct ways: (1) the discovery of Johann Bruch as the father of wisdom genre and (2) reorienting wisdom methodology to a constellation of texts approach. Johann Bruch was swallowed up in footnotes and pushed to the periphery, but Will Kynes revives his importance for the development of wisdom literature.  Kynes summons biblical scholars to reexamine their categories, but also to dig deeper than surface level publications. He provides an example of excellent scholarship. Although, scholars will disagree with his conclusions they must reexamine the evidence in light of his study.

Kynes proposes a three-dimensional approach to the text which he calls a constellation method.  Kynes, in a personal message, says, “The constellation approach is unique to me as far as I know though others have touched on it.” A strength but weakness with the present work is Kynes’ methodology.  The weakness is that he spends only one chapter developing his methodology then providing test cases in the various corpora.  The strength of his approach is that he develops the discussion for genre studies.  Kynes should elaborate his methodology in a further work since his provides a distinct methodology. Although, Kynes is a young scholar he shows promise to contribute to the field of Old Testament. This author has waited with anticipation for over a year for the publication of this book.

An Obituary of “Wisdom Literature” is a resource that touches on a broad level in Old Testament studies. Those considering wisdom’s place in the canon should read Section I to orient themselves with direction of the field. Kynes provides the most comprehensive and succinct summary of wisdom literature to this date. His summary does not rehash old paradigms or information but presents fresh insights into the issues. Scholars investigating hermeneutics and genre will be enriched by chapter five where Kynes describes his methodology. Pastors will benefit from his last section where he treats Job, Ecclesiastes, and Proverbs with his methodology.