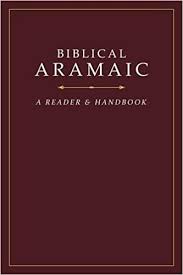 Biblical Aramaic: A Reader & Handbook is an excellent addition to the academic resources on Biblical Aramaic.  As the authors relay, Biblical Aramaic is often neglected in seminary language studies due to the small percentage of the Old Testament written in Aramaic (ix).  However, to fully understand and apply “the biblical languages,” one must surely include Aramaic in his/her studies.  The authors include Donald Vance, Associate Professor of Biblical Languages and Literature at Oral Roberts University. Vance studied Northwest Semitic Philology at The Oriental Institute, and received his Ph.D. from the University of Denver and Iliff School of Theology.  Second, George Athas is a lecturer in Old Testament Studies, Hebrew, and Church History at Moore College in Sydney, Australia.  Third, Yael Avrahami received his Ph.D. from the University of Haifa and is the chair of the Department of Biblical Studies at Oranim Academic College in Haifa, Israel.  Finally, Jonathan Kline received his Ph.D. from Harvard University and currently serves as the academic editor at Hendrickson Publishers.  Kline’s contribution to the work includes the helpful vocabulary and morphology lists.

The next section of the Introduction provides the reader with a pathway from Hebrew to Aramaic morphologically.  Many readers will be familiar with Biblical Hebrew, and so these general differences between Hebrew and Aramaic will allow the student or pastor to move rather easily from their knowledge of Biblical Hebrew to Biblical Aramaic.  After rehearsing some differences (distinct vocabularies, pronunciation and spelling differences, and the Canaanite shift), the authors move to the similarities between the languages.  On page xiv, the authors provide a helpful chart listing consonantal equivalents between the two languages.  For example, a ז in Hebrew can often be a ד in Aramaic.  Likewise, the צ in Hebrew may sometimes be an ע in Aramaic.  Knowing these consonantal equivalents can help the Hebrew student move from the Hebrew זָהָב (‘gold’) to the Aramaic דְּהַב (‘gold’).  Similarly, Hebrew אֶ֫רֶץ (‘land’) is equivalent to Aramaic אֲרַע (‘land’).  These consonantal equivalents are indispensable for obtaining a quick, but elementary, Aramaic vocabulary.

Next, the authors discuss the Aramaic verbal system, particularly the different nomenclature for Aramaic binyanim versus Hebrew binyanim (xv-xvi).  This discussion will be required in order for one to make his/her way through this work.  While Aramaic stems have similar nuances to Hebrew verbal stems, the nomenclature for these stems is rather different.  To further the difficulty, various authors use different nomenclature depending on their system of learning Aramaic.  Russell Fuller uses a shorthand numerical system with 1 being the base stems (active and passive/reflexive), 2 being the intensive stems, and 3 being the causative stems.  Miles VanPelt (Basics of Biblical Aramaic, 2011), Alger Johns (A Short Grammar of Biblical Aramaic, 1972), and Franz Rosenthal (A Grammar of Biblical Aramaic, 2006) follow the standard naming of the stems (Peal, Peil, Hithpeel, Pael, Hithpaal, Haphel, and Hophal), while the authors of Biblical Aramaic follow the linguistics designation of the Grundstamm, or the language’s base stem, the “G stem.”  Other linguistic designations in this volume are “D” for “doubling” (intensive dagesh forte in second radical), “H” for causative stems, and various other designations to highlight passive, middle, or reflexive voice nuances.  While these designations are at home in linguistics discussions, they may be foreign to some Biblical Hebrew and Aramaic students, and so the chart on page xv will be valuable for understanding the handbook/reader portion of the volume.

The final section of the book’s Introduction provides helpful ways to use this volume.  The discussion here primarily includes how to use the book’s extensive vocabulary and morphology lists.

Being an Aramaic “Reader,” the next fifty-six pages include the Aramaic portions of the Bible along with a detailed apparatus providing verb parsing, vocabulary helps and some minor grammatical comments to aid with translation.  The Aramaic text is fully pointed, and the apparatus is keyed using superscripted letters tied to footnotes below the text.  The reader will need to refer to the abbreviations list on pp. xxi-xxii to fully comprehend the apparatus.  However, after using the “Reader” portion of the volume for a few minutes, the abbreviations will become normal and natural.  Regarding vocabulary in the “Reader,” words that occur twenty-five times or more are not analyzed below the Aramaic text.  Rather, these frequent words are listed in a glossary in the back of the book.  This feature allows for efficient translation while also removing the “crutch” of extensive vocabulary help.

To say that the “crutch” or vocabulary help has been removed refers only to the Aramaic textual apparatus in the “Reader” portion of the work.  The remainder of the book, nearly 75% of the volume, contains an array of vocabulary and morphology lists.  List 1 (pp. 61-78) provides all words that occur two times or more in Biblical Aramaic.  The list contains not only vocabulary and definitions, but also the part of speech and the frequency of each word.  List 2 (78-87) address all hapax legomena in Biblical Aramaic including a staggering (and depressing) 266 words.  This list includes lexical forms, definitions, attested forms as they occur in the text, parsing, and the verse in which the word occurs.  List 3 (pp. 88-94) begins the section of lists for parts of speech, beginning with verbs.  List 3 provides all verbal roots with gloss definitions and the frequency that these verbs occur.  Lists 4-15 (pp. 94-117) cover common nouns, proper nouns, adjectives, pronouns, prepositions, numbers, adverbs, conjunctions, disjunctives, interjections, particles, and collocations respectively.  Lists 16-25 (pp. 118-147) cover all verbs by stem, and Lists 26-45 (pp. 148-198) includes all verbs by root type (‘strong’, I-ע, I-א, II-ו, etc.).  The lists of verbs by root type provide a remarkable benefit to observing morphological trends within Biblical Aramaic as well as confirming morphological trends among the “weak” verbs of Biblical Hebrew.  Lists 46 and 47 (pp. 199-210) provide verbs by frequency of attested form and number of stems in which the verb occurs.  Lists 48-55 (pp. 211-223) provide words with various pronominal suffixes.  Lists 56-57 (pp. 224-228) address words that are easily confused, particularly homonyms and consonantal homonyms respectively.  The final lists, Lists 58-63 (pp. 229-231), include various loanwords from Persia, Sumer, Akkad, Greek, and Hebrew.

The value of this volume can be summarized in two categories.  First, this volume provides an easy-to-read reproduction of the Aramaic portions of the Bible.  Not only is the text itself visually appealing, but the apparatus provides helpful information for efficient translation and grammatical discussion of the Aramaic text.  Secondly, the vocabulary and morphology lists in this volume provide a single location for lexical analysis of Biblical Aramaic.  Rather than working with various Bible software searches, these lists provide a multi-faceted look at the vocabulary and morphology of Biblical Aramaic in one place.

With multiple resources in this single volume, this work will be most helpful to the seminary student or pastor who is seeking to read (with efficiency) the Aramaic portions of the Bible.  While the introduction provides some (very) basic introductions to the Aramaic language, those without any knowledge of Biblical Aramaic may find it difficult to use this volume with ease.  However, those with some background in Biblical Aramaic will find a great resource here.  Those who have a background in Biblical Hebrew will also find an excellent resource here, but some additional study may be required in order to fully understand the differences between Hebrew and Aramaic.  This volume accompanied by VanPelt’s Basics of Biblical Aramaic would provide a strong baseline for any second semester seminary student who desires to study Biblical Aramaic.

Boyce: The College at Southern