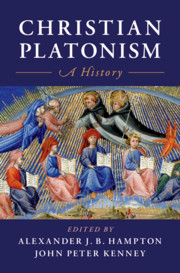 Christian Platonism: A History is edited by University of Toronto Assistant Professor Alexander J. B. Hampton and Saint Michael’s College Professor Emeritus John Peter Kenney. The individual chapter authors range from various universities around the world from Cambridge to Notre Dame to Toronto to Oxford. It is hard to imagine that the editors could have assembled a more well-educated group for the topic. And at over 500 pages, it is a dense, well-researched, tour de force on the topic.

The book is divided into three parts: Concepts, history, and engagements. Before the main three sections the editors provide an overall introduction to Christianity and Platonism. The editors argue that the term “Christian Platonism,” for the purposes of this book, is elastic given the complex relationship between Christianity and Platonism and the significant variances across history (p. 3). However, they do suggest that there is one constant thread throughout history: transcendence, or a commitment to a higher level of reality beyond the material world (p. 4).

The first section on the major concepts of Christian Platonism begins with a chapter from Lloyd Gerson on the value of Platonism. He argues that, by the Council of Nicaea, philosophical contemplation by Christians was done “almost exclusively within a Platonic context” (p. 13). He then argues that Platonism, at its most basic, means “there is a distinct, hierarchically arrayed subject matter irreducible to the material or physical world” (p. 16). Such a definition is rather thin given that Platonism is committed to a vast array of further doctrines. Because of the elasticity in the definition, he can argue that those like Aristotle are Platonists too (p. 22). John Dillon and Daniel John, in their chapter “The Ideas as Thoughts of God,” then trace the development of the Platonic Forms as ideas of God. Andrew Radde-Gallwitz follows Dillon and John’s brief chapter by arguing that both Greek and Latin pro-Nicene theologians in the late fourth century drew primarily from Platonic resources in their Trinitarian theologies (p. 53). The chapter closely analyzes how similar alternative theologies such as Arianism (a theological movement that denied the divinity of Christ) mirrored Platonism. Of course, he also shows how Platonism could be employed with very different Trinitarian theologies, so it is not simply reducible to Platonism (p. 69). The following chapter from Kevin Corrigan seeks to show how Christianity developed and transformed thinking from those like Plotinus (p. 85). Corrigan thus provides his own definition of Christian Platonism as “a sophisticated, critical, but sympathetic dialogue, that thinks through the logic of language in relation to God, while freely acknowledging our inability to know anything about God’s nature” (p. 95). Next, Olivier Boulnois traces the development of theology as that of a rational science of faith. The final chapter in the section from Rudi A. te Velde considers the necessary conditions of a Christian doctrine of creation and whether a Neoplatonic understanding of participation can be transformed to meet its criteria.

The second section on history begins with Mark Edwards who seeks to show the continuities and discontinuities from early Christians and Platonism—sometimes finding an ally and other times a foe. Next, John Peter Kenney provides an overview of Platonism and Christianity in Late Antiquity. Kenney, like many of the authors in this work, suggests that the unifying principles of Platonism are not its actual doctrines but its “shared intellectual style, textual canon, forms of discourse, and modes of personal formation” (p. 163). However, Kenney suggests that “Christians were never really Platonists in antiquity” though sometimes they were “fellow travelers” (p. 166). Many early Christians such as Justin Martyr and Origen found Platonism useful as a transcendent metaphysical basis but not a spiritual path (p. 171). Later Pro-Nicene Christians would take up the transcendental metaphysics of Plotinus alongside his modifications (p. 177). Next, Lydia Schumacher examines the medieval west. Her focus is to examine an indirect channel of Platonism that is largely ignored in the literature—Islamic readings of the tradition before Aquinas and Bonaventure (p. 185). Then, Torstein Theodor Tollefsen expounds the Byzantium tradition and Platonism. Tollefsen utilizes a distinction between formal and diffused Platonism, where formal Platonists are those who strictly adhere to Platonism and identify with Platonism as such, and diffused Platonists are those that do not so identify with Platonism but still borrow some ideas like transcendence and the Forms (p. 208). This section closes with chapters on the Renaissance, the Northern Renaissance, early modernity, Romanticism, and modernity.

The third and final section focuses on creative and critical engagements with Christian Platonism. Andrew Davison and Jacob Holsinger Sherman open with a wide-ranging chapter on Christian Platonism and natural science. They cover topics from participation to math to biology and psychology. The following chapter is from Alexander Hampton on nature and environmental crisis. Hampton attempts to argue that a Platonist participatory ontology provides a needed “radically non-anthropocentric answer” to the crisis of anthropocentric conceptualizations of nature that determine all sorts of economic, religious, and scientific perspectives (e.g. placing humans above nature in some sense that leads to environmental degradation) (p. 381). The remaining chapters cover art and meaning, value, dualism, and materialism, love and friendship, and multiplicity in earth and heaven. The first two are the most creative, while the final four cover more traditional loci within Platonist thinking.

It is hard to appraise such a work as this either negatively or positively given its breadth and varied authorship. Despite this, on the whole, it is a fine introduction into the Christian adaptation of various Platonist doctrines. Several of the chapters are quite stimulating and even fresh new ground is broken in chapters like Hampton’s work on the environmental crisis and Christian Platonism. Overall, the chapters are all well-argued, well documented, and well situated. There is hardly a chapter that lacks any of these virtues. Thus, it should be widely acclaimed as the resource on the topic given its breadth and depth.

However, I do have one main qualm with the book—though this does not detract from its overall value. The problem is this: I am continually confused over the proper definition of Christian Platonism. At times it seems the authors assume if thinkers use any Platonic themes, they are Christian Platonists. Other times they admit that Christian Platonism is a term lacking clear definition. Take several examples besides those listed in the summary above: Joshua Levi Ian Gentske says, “I treat Platonism as a historically and culturally contingent mesh of dynamic and diverse ideas, practices, and images, which can nevertheless be heuristically envisioned as a recognizable discourse” (p. 328). Elsewhere Lydia Schumacher: “there are as many kinds of Platonism as there are Platonists” and “the meaning of the term ultimately breaks down” (p. 190). But I find this elastic understanding largely unhelpful given that such a flexible definition ends up reducing to nothing uniquely Platonist. When used in this way, I do not know what makes it different than other philosophical traditions that would be comfortable affirming something like divine transcendence. Such a definition of Platonism likely stems from a reliance on Lloyd Gerson’s “Ur-Platonism” that defines it negatively by five “anti’s”: anti-materialism, anti-mechanism, anti-nominalism, anti-relativism, and anti-skepticism. But while these may be necessary conditions of Platonism, they surely are not sufficient conditions. For example, traditionally, Platonism has been described as adhering to certain theories of Form and abstract objects. Yet one could reject such theories, affirm the five “anti’s” and be considered a Platonist. I do not find such a way of categorizing Platonism especially useful or persuasive. Moreover, the Christian tradition, as shown throughout, has a variegated way of utilizing certain Platonist concepts here. So, when Christian Platonism is defined in this elastic way, it is never clear why it should be called Christian Platonism rather than simply Christianity.

So, how should the biblical-theological student interact with this book? For the student desiring to understand much of the philosophical background to various thinkers throughout the history of the church, I think this resource presents a helpful guide. You will find background on thinkers from Thomas Aquinas to the Cappadocian Fathers. I also think it will prove beneficial for highlighting various shared metaphysical and epistemological assumptions throughout the Christian tradition. It should be noted that the book is not an undergraduate level text. It is best suited for graduate students and requires some level of prior philosophical-theological knowledge. In sum, I warmly commend Christian Platonism: A History. It is carefully argued, well written, and contains several new appropriations of special interest to theologians seeking to retrieve the past for renewal.