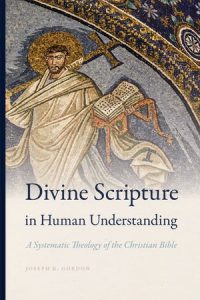 Joseph Gordon is associate professor of theology at Johnson University in Kissimmee, Florida. Divine Scripture in Human Understanding is a revised version of his doctoral dissertation at Marquette University under Robert Doran who specializes in the theology of Bernard Lonergan.

Gordon’s work proceeds in six chapters. He begins by introducing the overall framework and thesis. His goal is to provide “a constructive systematic account of the nature and purpose of Christian Scripture that articulates the intelligibility of Scripture and locates it within the work of the Triune God in history and within human cultural history” (p. 8).

Chapter 2 works from the premise that the varied perspectives of the scriptural books and their “pervasive interpretive plurality” requires Scripture alone to be an insufficient tool for comprehensively understanding the Christian faith (p. 34). In other words, it is not that Scripture itself is lacking but that humans require multiple “horizons” of interpretive action to obtain the meaning of the text. They cannot glean all that the Bible means by reading the Bible in isolation. Recognizing this means considering which “horizons” are necessary to read in a distinctively Christian way (p. 39). Therefore, Gordon marshals Irenaeus, Origen, and Augustine to ground this way of reading—particularly through the “rule of faith” which is the encapsulated economic work of the Triune God.

Chapter 3 extrapolates what the work of the Triune God captured in the rule of faith is. Having shown the rule’s usage in church history, what is its content for a contemporary audience? He does this to provide the theological context needed for locating Scripture in the work of God in history (p. 99). This is crucial because it is impossible to understand Scripture apart from the divine drama of creation and redemption.

Chapter 4 focuses on how the nature of human persons shapes understanding. He provides this contemporary theological anthropology by recovering the fact that humans have their “supernatural telos in the beatific vision” and that humans have “distinct, identifiable characteristics, capacities, and activities that are the means of our transformation” (pp. 122-23). He then presents the thesis that humans are “fundamentally self-transcending animals” (p. 130). It is the capacity for wonder and questioning that is most deeply human (p. 137).

Chapter 5 details the “realia” or nature of Christian Scripture. In light of the work of God in history and the nature of humanity, what is Christian Scripture? In order to know what it is, we must know what it has been (p. 171). According to Gordon, the biblical textual tradition is fluid based on evidence from the Dead Sea Scrolls, Samaritan Pentateuch, and ancient Greek translations (p. 190). Because of this, he contends “that the fact that the Triune God has not preserved the text—whether wholesale or merely in a single historical tradition—is theological instructive” (p. 194). Therefore, anyone seriously considering the nature of Scripture must account for these variances and historical progressions.

Chapter 6 explains the intelligibility of Scripture—its ultimate purpose. He begins by locating Scripture in relation to the work of the Spirit and the work of the Son before analyzing its purpose. He argues that the purpose of Scripture is not to create a worldview but to transform readers through the Spirit so that they have the mind of Christ and know the love of God (p. 251). If the reader stops short of transformation, he or she has stopped short of its purpose (p. 255).

Having roughly summarized Gordon’s book, I begin by noting several misgivings. Beyond a difficult writing style, the three greatest problems are its overall vagueness in argumentation, several faulty entailments in argumentation, and occasionally its dubious argumentation. For example, consider when Gordon calls the Spirit a “transcendent cause” so that the authors of Scripture remain free despite God’s pervasive causation (p. 241). Similarly, we are told that “consciousness has its own emergent intelligibilities that depend upon but cannot be reduced to such biochemical and neurological manifolds” (p. 135).  Maybe these are both true, but nowhere does he explain how this works or what a “transcendent cause” or “emergent property” is. It is merely assumed that these vague notions resolve any issues. Regarding the faulty entailments, he claims that attempts at harmonizing Scripture refuses mystery and is rationalistic at its core (p. 243). But nowhere is this argument proven. There is no necessary entailment from a desire to harmonize to a denial of mystery or an acceptance of rationalism. Maybe it is true, but he fails to show why. He also uses the fact that Luther did not have the same level of canonical confidence in Hebrews and James as he did other books to support the claim that Christians have not considered closures of the canon absolute (p. 197). But nowhere is the reasoning behind Luther’s skepticism addressed. This is a major factor in his rationale and does not correlate properly to the conclusion he makes. Finally, as an example of a dubious argument, see his statement that his position is “not justifiable under any secular criteria of rationality” (p. 247). Maybe he has an elaborate explanation for a sacred version of rationality, but it is not clear that this is so, nor is it clear how such rationality would differ.

Having discussed several negatives, what does Gordon’s book do well? First, he provides an extensive introduction to Bernard Lonergan, citing over seventy unique sources throughout. He also offers extensive engagement with Henri De Lubac, citing nearly thirty unique sources. Anyone interested in encountering contemporary applications of them will be pleased and anyone unfamiliar will become well acquainted. Second, he provides a superb brief explanation and defense of systematic theology. For example, he defines it as “the pursuit of an understanding of the mysteries of Christian faith at the level of the theologian’s own time” (pp. 22-23). This, along with many other explanations, provides a helpful summary of what systematic theology is and should be. Third, his esteem for church history is commendable. He says that “Christian Scripture, as Christian Scripture, is unintelligible outside of Christian tradition” (p. 109). And he does not merely state this but practices it throughout his book. Any reader will be drawn to the deep well of historical resources through their reading.

Whilst this book and its author will likely play a role in future explanation of the nature of Scripture, the more pastorally inclined will likely find this work unhelpful as it does not provide the meaty systematic explanations required for pastoral practice (despite its subtitle and thesis’ insistence on a systematic exposition). Since its key ideas are primarily found in recounting historical data and rehashing modern debates on the nature of meaning, it advances very little new information. Based upon this, while students may find it as a helpful study resource, I would not recommend it as required reading. Every book has its values—even books that are not to be recommended—but considering the limited time and money that each person has, I do not think this is the book to invest in unless one is searching for a contemporary appropriation of Bernard Lonergan or Henri De Lubac. Even so, I fail to find it clear or structured in a way that is beneficial to students or scholars alike. 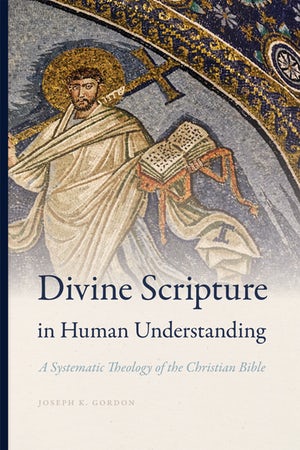