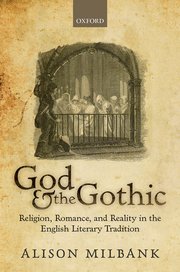 Although traditionally seen as a marginal form within the wider world of English literature, the Gothic novel has become increasingly popular with both academic researchers and students since at least the 1970s. Lending itself to a diversity of theoretical and critical approaches, from the psychoanalytic to the Marxist, the Gothic novel has spawned a host of academic monographs and a thriving field of Gothic studies. That said, a surprisingly small amount of attention has been given to the theological and religious elements within this kind of writing—an oversight which stems from both literary studies lack of comfort with the theological and the reticence of theology to take seriously the heterodox and heretical Gothic. Happily, this lacuna has started to be corrected, with increased scholarly attention being given to the intersection of theology and Gothic writing. Into this area, Alison Milbank, associate professor of theology and literature at the University of Nottingham, has produced what will be the landmark text for years to come and an indispensable guide for both students of the Gothic and researchers of theology and literature.

Building off the work of Charles Taylor, particularly the important study A Secular Age, Milbank posits the emergence of the Gothic as being a specifically English Protestant phenomena. Tracing the roots of the Gothic back to the reformation, Milbank argues that the core function of this type of writing is a kind of imaginative and religious mediation that emerges due to the breaks with the Roman Catholic Church—absent of an ecclesiastical structure that could mediate between God and humanity, cultural forms emerged which could fulfill that mediating function. Rather than lapse into easy binaries, Milbank makes the more sophisticated argument that the Gothic marks an “unease with rational dissent and with a Protestant lack of mediation between God and humanity” (p. 4). The book seeks to demonstrate this with close detailed readings of Gothic novels from the late eighteenth century to the very end of the nineteenth century. The aim is to both “theologise” Gothic writing and to challenge the notion of the Gothic’s literary marginality as it “holds the historical and the poetic, the real and the romantic in constant play” (p. 5).

The individual chapters proceed in a broadly historicist approach with close attention being given to theological and social contexts from which the texts are produced. The four parts of the book move from the long reformation and the early Whig Gothic, to a smaller section of Scottish Gothic, then onto the Irish Gothic before the concluding section, which deals with some of the key Gothic novels of the fin-de-siècle. From the opening section the chapters cover the work of Ann Radcliffe (a long-standing interest of Milbank’s) and Matthew Lewis before finishing with a fascinating chapter on the work of Mary Shelley and the epic poetry of Dante. Milbank’s reading of Frankenstein places it within Shelley’s body of work as a whole, by arguing that there is a “developing theology in her novels which accompanies her religious development towards an embrace of orthodox Anglicanism” (p. 124). The readings of Shelley’s and Dante’s work outlines a fascinating literary theology of creation, forming a “sophisticated theology of the imagination, wholly in accord with Anglican conceptions of freedom of the will, in which divine grace completes nature” (p. 142).

From there, the next section on Scottish Gothic concerns itself with Calvinism but avoids the expected step of merely dealing with total depravity. The chapter on Hogg and his landmark novel, Memoirs and Confessions of a Justified Sinner, provides a striking theological anthropology and a positive way of dealing with the divided self, rather than reading in terms of a divided or fractured subjectivity (a point made by much psychoanalytic criticism on the Gothic). Duality, we are told, is an “existential reality which enables self-questioning and humility” (p. 167).

As the nineteenth century progresses, Milbank reads the Gothic as becoming, more, not less religious, for as Anglicanism develops it becomes more theologically nuanced and more able to explore that via media between God and man, mediating theological and religious experience with a greater degree of control. The section on Jane Eyre shows the ways in which the theological Gothic can “question the natural and reveal what lies beneath” (p. 268) in its combining of the classic Gothic entrapment plot and a Christian conversion narrative. One of the best final sections of the book is its treatment of Bram Stoker’s Dracula, which in its hunt for a middle way produces a rich and ecumenical theology that draws together the traditional and the modern, the Catholic and the Anglican in its search for an effective and united front against the threat of the vampire. The novel’s protagonists, known as the “crew of light” within the text form a model of Christian community that at the close of the novel is perpetuated in the birth of a child—a “productive outcome of these acts of self sacrifice” (p. 243).

At the book’s close, Milbank turns to the ecclesiastical Gothic produced by high-Anglican writers such as M. R James. As with the writers of the Whig Gothic, these late nineteenth century writers repeat the double gesture of a desire to escape the Catholic past whilst mourning what has been lost. James particularly seems keenly aware of the medieval mediatory practices of religion in the past (not a surprise given his own academic background) and Milbank makes a compelling argument for taking James far more seriously than much materialist or secular Gothic criticism does.

At the conclusion to the book, Milbank’s argument about the Gothic as essentially a model of religious historiography constantly refiguring and reexamining theological practice in the light of shifting wider religious and cultural contexts. As the nineteenth century advances the Gothic tends to lose its anti-Catholicism (as shown in Stoker’s ecumenicism). As Milbank touches on in the Epilogue, the concerns of the Whig Gothic are, in many ways, still behind much of the contemporary Gothic, which (as Simon Marsden has pointed out) is also deeply fascinated with theological ideas. Whilst some may find Milbank’s insistence that the Gothic is inherently Anglican a claim that is somewhat contentious (and one which raises the distinct possibility that Anglicanism is inherently Gothic), the book raises powerful arguments about the deeply religious nature of the Gothic and provides a compelling and uniquely Anglican vision of literary analysis. It will be an indispensable work for scholars of the Gothic and should serve as a spur for imaginative theologians to give the Gothic far more detailed attention.