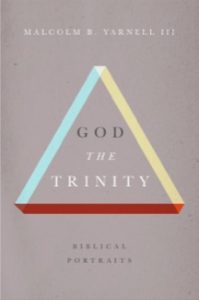 God the Trinity: Biblical Portraits presents a nuanced exegetical case that “the pattern of the Trinity is woven into” (p. 5) the fabric of the various Old and New Testament literature. Throughout the work, author Malcolm Yarnell (D. Phil., Oxford), Research Professor of Systematic Theology at Southwestern Baptist Theological Seminary, balances close theological exegesis with a desire to help the community of believers understand life in the Trinity.

The opening chapter serves to introduce the case made in the sequel, appropriately beginning with Yarnell’s hermeneutic. Eschewing “propositionalism” (the insistence, bequeathed by the Enlightenment, that doctrinal claims must be propositional claims), Yarnell instead utilizes the historical critical method—although not indiscriminately (decrying its occasionally “acidic” use [p. 79], as well as its tendency to blunt our reading of the fathers [p. 98]). Each chapter (save chapter four) centers on the unpacking of a selected biblical passage, each yielding a complementary portrait of God (the fitting metaphor of portraiture is used throughout). Chapter one rounds out with a consideration of Matthew 28:16-20, highlighting the portrayal of the divine persons as in a unity that suggests coordinate relations amongst them (p. 21).

Focusing on 2 Corinthians 13:14, Yarnell presents in chapter two “a basic economic Trinitarianism” revealed in “how God works and how we are commanded to respond to him in worship” (p. 36). Taking each of the text’s four parts in turn, Yarnell considers the theme of each in relation to God’s work, naturally raising questions about the persons themselves. Regarding Jesus, for example, Yarnell traces Paul’s use of “Lord” to the Old Testament covenantal names “Yahweh” and “Adonai,” as well as “Messiah,” establishing Jesus as the bringer of the grace that originates in the Father and is perfected in the world by the Holy Spirit. Yarnell is careful at each turn (rightly) to emphasize the unity of God’s operations.

Having established Scripture’s presentation of God as three in one, chapter three looks to “the roots of Christian monotheism and its earliest development in a Trinitarian direction” (p. 57). How, exactly, do Christians speak of God as three in one? Turning to Deuteronomy 6:4-7, Yarnell presents the passage’s context (the Law, especially as God’s blessing) as the segue to the only, personal God’s invitation to Israel to enter into a unique relationship with himself. An early challenge for the Christian community, of course, was assimilating strict monotheism and the worship of more than one person as divine. Following Gerald Bray, Yarnell finds the crux of this issue in one’s understanding of “the place of the Messiah in relation to God” (p. 77), ultimately maintaining the divine title of the Shema is ascribed to Jesus (p. 79).

Returning to the topic of hermeneutics, the fourth (and shortest) chapter tracks “the progress of exegesis since the Reformation period, paying special attention to the problems introduced in modernity” (p. 88). This presentation of Yarnell’s reading of certain historical influences (e.g., Kant) on exegesis is interesting, although certain readers will feel it somewhat potted. Finding in this survey the roots of “problems in theological language,” Yarnell concludes, “we may state that God has an essence, but we cannot speak of what his essence is” (p. 105).

Chapter five looks to the Gospels, especially John’s, to ask, “What exactly the Father and the Son possess in common” and what their possessing it in common means (p. 107)? Yarnell methodically assesses Jesus’s actions to answer such questions. The remainder of the chapter unpacks the “threefold form” of John’s Gospel, presenting in turn “the only begotten God,” “the divine monarch,” and “the proceeding God.” One appreciates Yarnell’s sensitivity to the intra-trinitarian relations in Scripture, which he finds to be “eternal” and indeed “necessary” (p. 123), although certain readers will wish more were said toward specifying just what the relations familiarly known as “begottenness,” “generation,” and “procession” consist in.

Continuing in John’s Gospel, chapter six opens with “the metaphorical nature” of Jesus’s words in John 17, which tell us something of what God is like. Again noting the inadequacy of “human language” to describe God, Yarnell walks the reader through the “fivefold reflection upon the Johannine patterning of God” (p. 140) he finds embedded in the text. To this point in the book readers will have noticed that such terms as “essence” and “person” find but sparse usage (cf. pp. 116-117), and this is because such terms are “postbiblical” (p. 154), which Yarnell shies away from although without fully rejecting.

While timely in its release amidst rekindling trinitarian debates (particularly amongst Evangelicals), God the Trinity is little concerned explicitly to enter that fray. Nevertheless, Yarnell makes two claims that will be of particular interest to those involved. Regarding the issue of the Son’s equality with the Father, Yarnell writes: “In a move that has drawn many evangelicals…away from the Cappadocian doctrine of the eternal processions of the Son and the Holy Spirit, Calvinist theologians have deemed such language inappropriate” (p. 147). It is doubtful many Calvinists will appreciate this, particularly those who emphatically affirm the ontological equality of the divine persons. Second, Yarnell addresses a “Calvinist rule” which he explains is a “hermeneutical rule distinguishing between the ontological equality and the functional subordination of the Son” (p. 147-8). Both Calvinist and other readers who draw such a distinction will be surprised that Yarnell “is convinced neither that” the rule “is biblical, nor that it is helpful” theologically. Given his repeated affirmations that the divine persons are fully and equally divine, along with such acknowledgements as “the Son may be said to be ‘subordinate’ to the Father without endangering the Son’s equal possession of the Father’s self” (p. 151) and that in Revelation John indicates “Jesus’s equality with, yet subordination to, the Father…(in) the eternal throne of God” (p. 211), it is not entirely clear what Yarnell is rejecting. Perhaps he is attempting (quite understandably) to move beyond potentially unclear “subordination” language, but if that is so then the claim that “there is eternal subordination in John’s portrayal of the three…. There is no hint here that the subordination of the Lamb and the Spirit is…merely functional” (p. 217) are left somewhat unclear. Perhaps he assumes that “functional subordination” cannot be eternal.

Chapters seven and eight look to Paul’s portrait of the Trinity via the divine economy, especially in Ephesians, and John’s in Revelation, respectively. Yarnell is truly at his best in expounding the theology of the Trinity in these chapters, highlighting not only the intra-trinitarian relations but God’s unity and various works (redemption, judgment, renewal, etc.), as well. Having followed the avenue of economy, however, Yarnell is emphatic that “economy is dependent on ontology and not vice versa” (p. 194). Following chapter eight is a short epilogue containing ten theses offered as theological takeaways of the trinitarian portraits developed throughout the work, as well as new translations of the Apostles’, Nicene, and Athanasian Creeds forming an appendix. Those using God the Trinity as a textbook will find these useful.

There is much to appreciate in God the Trinity, especially Yarnell’s insistence that theology be grounded in exegesis. The book is generously footnoted, and while proficiency in the biblical languages will be helpful it is not required for a beneficial reading. Various readers will find quibbles here and there—attributing to Justin Martyr the conception “of Christ as an extension of the divine mind” (p. 123) or referring to an “evangelical correspondence theory of truth” (p. 176), for example. Throughout the book one detects a subtle deprecation of philosophy, which certain readers will find discouraging. Although the role of philosophy vis-à-vis theology is never addressed overtly, one finds the former routinely portrayed as (only) contributing to the latter’s undoing. Christian philosophical theologians have made valuable contributions to trinitarianism, and certain readers will detect in Yarnell’s project points at which such contributions could play a helpful role. Nonetheless, God the Trinity is a welcome addition to the trinitarian literature, preserving focus on the biblical texts while making a solid theological case that the Trinity is, indeed, woven into the full canon of Scripture.

College at Southwestern, and 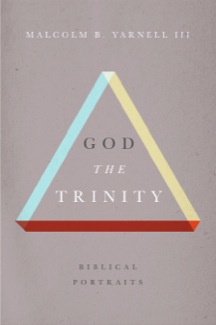