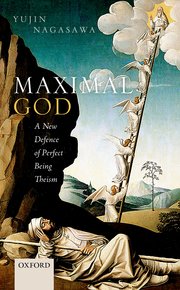 Yujin Nagasawa is a professor of philosophy at the University of Birmingham, and the co-director of the John Hick Centre for the Philosophy of Religion. He has published books on phenomenal consciousness, miracles, and the existence of God. In Maximal God, Nagasawa examines the claim that God is a perfect being, and the role this plays in developing the ontological argument for the existence of God. Maximal God is comprised of 7 chapters.

Nagasawa identifies three kinds of problems that face perfect being theism. Each of these three kinds of problems seeks to show that the existence of a perfect being is metaphysically impossible. According to Nagasawa, these three problems are really aimed at The Omni God Thesis, and not perfect being theism. What Nagasawa calls Type-A arguments focus on the internal coherence of one divine attribute. For example, someone might argue that omnipotence is incoherent because God cannot create a stone that is so heavy that He cannot lift it. If the property of omnipotence is incoherent, then the existence of an omnipotent being is metaphysically impossible. What Nagasawa calls Type-B arguments focus on the internal coherence of two or more of God’s attributes. A classic example is the apparent conflict between omnipotence and omnibenevolence. As omnipotent, God should be able to perform sinful actions. Yet, as omnibenevolent, God cannot perform sinful actions. This purportedly raises a question: is an omnibenevolent God really omnipotent? What Nagasawa calls Type-C arguments focus on the mutual consistency of God’s properties with certain facts about the world. The classic example here is the logical problem of evil, which seeks to show that there is a contradiction between the existence of evil and the existence of a God who is omnipotent, omniscient, and omnibenevolent. To be sure, there are replies to Type-A, Type-B, and Type-C arguments, but those must be considered on a case by case basis.

Chapter 2 of Maximal God examines the claim that God is the metaphysically greatest being. I found this chapter to be an incredibly important contribution to contemporary discussions on God’s perfection. In contemporary theology, it is often asserted that God is the greatest, has eternal glory, and so on. Theologians will often assert that their doctrine of God is greater than their opponent’s doctrine of God. However, there is rarely any explication of what this “greatness” means. Nagasawa offers a detailed discussion of what this means, and the theological world should take note.

In Chapter 3 Nagasawa examines the structure of Type-A, Type-B, and Type-C arguments in detail. As noted before, it is often assumed that perfect being theism entails The Omni God Thesis. Nagasawa explains that The Omni God Thesis has to consider Type-A, Type-B, and Type-C arguments on a case by case basis. He notes that there are good theistic replies to these arguments, but that it is inefficient to consider these arguments one by one. Instead, one can undermine all of these arguments in one fell swoop by adopting The Maximal God Thesis. Thus, The Maximal God Thesis offers a more efficient way to defend perfect being theism.

Advanced students of theology and philosophy will find Maximal God rewarding because it contains clear arguments and rigorous analysis of important issues in the doctrine of God. For those interested in apologetics, Nagasawa’s approach to the ontological argument should not be missed. For those who are brand new to theology and philosophy of religion, I recommend starting with Nagasawa’s earlier book The Existence of God: A Philosophical Introduction.