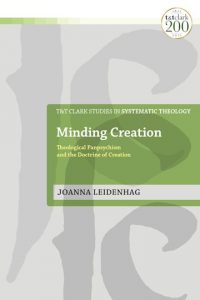 Minding Creation is the first full-length treatment of panpsychism for contemporary theological construction. Similar treatments from different perspectives have been published and come to mind that provide similar fruitful discussions. Just consider two recent representative examples: J. T. Turner On the Resurrection of the Dead and my The Soul of Theological Anthropology. All three provide interesting constructive theological treatments of a particular doctrine by drawing from a particular position within the philosophy of mind. Turner advances a theological construction using a version of hylomorphism and I advance a constructive, and in some ways exploratory, defense of Cartesianism. These represent some of the more recent analytic theological literature that moves beyond philosophy of religion to contemporary constructive theology.

Leidenhag approaches the doctrine of God’s relationship to creation through a consideration of panpsychism. Panpsychism is the view that mentality is fundamental to the natural world such that it permeates the whole world. She is clear that panpsychism, which serves as a broad category for a host of nuanced positions about the mind, is compatible with distinct comprehensive ontological theories instead of entailing just one (e.g., process theism, panentheism, pantheism, and other totalizing systems). It is even consistent with versions of Perfect Being Theology and classical theism (see especially pp. 105-37). Her case begins with a state of the art on what she sees as the popular bridge position between science and theology, namely emergentism, which is a kind of via media for physicalism and substance dualism. After a survey of the literature, Leidenhag raises concerns with emergentism. Some versions of emergentism are too weak either to do justice to the nature of minds (e.g., they often amount to a reduction) or results in some rather exotic, and unpalatable, theological ideas (pp. 13-45). This sets up her pivot to a consideration of panpsychism.

According to Leidenhag, we have good reasons for accepting panpsychism, and she sees little to no cost in accepting it (see chapter 2). Taking her cues from the patriarchs of panpsychism (e.g., Nagel, Chalmers, and Strawson), panpsychism’s greatest appeal is that it provides a simple explanation of a set of desiderata central to philosophy of mind and theology. First, it provides a monism of mind and matter without buying into the bifurcation of the world found in substance dualism. Second, it takes seriously the mind as a feature of the world (i.e., mental realism) that is unexplainable on materialism. Third, it avoids reductionistic explanations. Fourth, it avoids predicating magical emergent properties to matter, which amount to a version of creation ex-nihilo—an obvious problem for many theists. But, there is an interesting development. Where the patriarchs operate out of a secular framework as birthed from dissatisfaction with the merits of materialism, Leidenhag seeks to kindle the connection between panpsychism and theism (p. 81)—something she believes is quite natural, which she takes as an advantage over substance dualism. Accordingly, panpsychism has two advantages over dualism. First, panpsychism does not require the “radically different origin stories” (pp. 172-3) between the soul and the body. Second, panpsychism supplies a simpler, harmonious explanation of the soul’s origins without God’s constant and ongoing creation of souls at every moment that embryos come into existence.

Next, Leidenhag considers one historical proponent of panpsychism in Christian theology: Gottfried Wilhelm von Leibniz. She provides a fascinating discussion based on the principle of sufficient reason. The discussion certainly raises another question worth exploring—namely, what is the difference between panpsychism and idealism? For Leibniz’s ontological views have been taken to be a version of idealism, yet panpsychism is often considered a distinct ontology. The views are cousins if not siblings. Fascinating itself, there’s more to chew.

The last two chapters are the most constructive. Considering three proposals for divine action, Leidenhag shows how panpsychism can accommodate and deepen differing accounts from interventionist non-compatibilism, process theism, and the doctrine of double agency. Finally, Leidenhag draws out several implications for eco-theology in a way that permits a ground for a sacramental theology because God is able to be present to creation in a way that is impermissible on dualistic and interventionist pictures of the God-world relationship, or so it is commonly argued. In other words, to her lights, what panpsychism gets us is both Divine transcendence and immanence because mentality promotes ontological space for Divine action to permeate the whole world (p. 173).

As with all three works listed above, each places one doctrine under the microscope. The other works focus on the doctrine of personal eschatology and theological anthropology while Leidenhag’s focus is creation more broadly. But what is clear from each systematic analysis is how much all three doctrines so permeate the other that the implications tend to blend under microscopic detection. For this reason, Leidenhag is right to delineate theological anthropology as one natural place to continue panpsychism research. Her work secures several points for fertile reflection (p. 172).

With all that has been said of a positive nature, and there is much more to say beyond the confines of this short review, there are some philosophical and theological concerns. The first is philosophical, and to be fair, Leidenhag calls attention to it early on. It is called the combination problem to panpsychism, which is the problem of lower level consciousness’s, or dispositional proprieties, comprising and giving rise to a higher-order consciousness of a singular agent. Similar to the problem from physicalism, how it is that several singular bits could combine to comprise a one individual consciousness is utterly mysterious and likely incoherent. She is aware of this problem and grants that it is a substantive problem to which she offers a couple possible solutions from the literature. What is not clear is whether she places enough weight on this problem. As I see it, unless she were to affirm a form of absolute idealism of which panpsychism were a species, she cannot account for the consciousness of individual subjects. It appears that a version of Creationist Cartesian dualism or idealism, in which subjects of conscious experience are primitive particulars, is necessary to account for consciousness as we know it. That’s a more serious consideration, but a less serious one is theological in nature.

Second, it is not clear that panpsychism provides any advantage over idealism, e.g., Berkeley’s subject idealism, unless she considers the mind-independent reality of the material something worth preserving, but that is a value that would need some justifying. I have already noted a couple of similarities between the views above, but, it seems to me that all the desiderata mentioned through Minding Creation could be satisfied by Berkeley’s idealism. Berkeley’s idealism, as I understand it, affirms the following propositions: 1. All physical objects are phenomenal products of the Divine mind. 2. Humans are immaterial subjects of consciousness. 3. God communicates physical properties to created minds (i.e., human minds). Berkeley’s idealism permits a unified picture of the world where God is both transcendent and immanent. It avoids the bifurcated picture that is posited by radical dualisms. It avoids interventionism because there is no absolute independence between material substances and minds. It avoids incompatibilism. Divine action is compatible with the natural world precisely because the whole world is comprised of phenomenal perceptions, which are Divine communications. Finally, it permits a sacramental understanding of the natural world. God just is present to the world and all events in it.

Leidenhag’s Minding Creation would serve graduate students and scholars interested in the analytic theology of creation and theological anthropology. It might also serve as a supplementary text in a course on the doctrine of creation because she covers several up-to-date theories on Divine action. It would be true to say that this is the best treatment of panpsychism in a theological context, yet that is because it is the only book-length defense of the view in a theological context. It is unique in that way, which makes it groundbreaking. 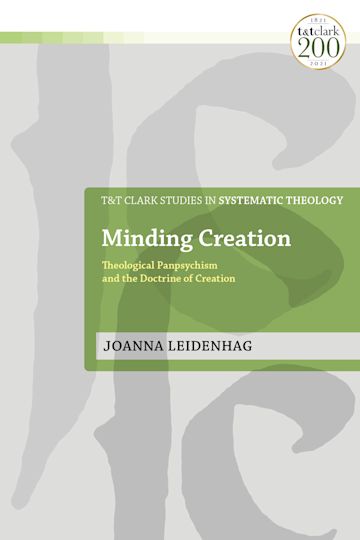