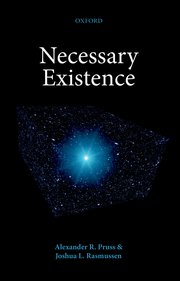 In Necessary Existence, Joshua Rasmussen (Assistant Professor of Philosophy, Azusa Pacific University) and Alexander Pruss (Professor of Philosophy, Baylor University) aim to defend the coherence and plausibility of the existence of a concrete being that exists of necessity, that is, a being that cannot fail to exist that can stand in causal relations (call this being “CNB” for short). While many of the ideas in the book have their origin in a series of previously published journal articles by Rasmussen, there is a great deal of new material in the book that will be of interest to those working in metaphysics and philosophical theology. The book is composed of nine densely packed chapters, each chock-full of rigorous, careful, and even-handed philosophical argumentation. A short review like this cannot possibly do justice to the clarity, creativity, and force of the philosophical arguments crafted in the book.

Philosophical arguments in support of a CNB have played an important role in the history of Western philosophy, specifically as it pertains to arguments for theism. Such arguments commonly appeal to some aspect of contingent existence (events, facts, or things that exist but could have failed to exist), together with what are known as causal or explanatory principles, as grounds for inferring the existence of a CNB. What makes Necessary Existence so significant is the way it demonstrates the cogency of a variety of underexplored modal arguments leading to the existence of a CNB.

The book begins with a helpful introductory chapter that situates the topic of necessary (concrete) existence within the context of contemporary analytic metaphysics and physics. In addition, the authors present the results of what they call the “Necessary Being” survey, an informal and interactive online survey (www.necessarybeing.com) designed by the authors to gauge ordinary intuitions regarding the concept of a necessary being.

In chapter two, Rasmussen and Pruss employ a standard account of the nature and logic of metaphysical modality, what is metaphysically necessary and possible. The overall aim of this second chapter is to clearly state and minimally justify the particular modal system—system S5 (whose characteristic modal axiom is

, i.e., if possibly necessarily P, then necessarily P)—that is assumed throughout the book and explicitly employed in many of the modal arguments for the existence of a CNB. For those without prior background knowledge in modal logic and metaphysics (and/or are unfamiliar with the sorts of symbols routinely deployed in symbolic logic), the chapter will prove challenging.

After explicating and defending a more traditional argument from contingency in chapter three (with a barrage of refutations to standard objections from David Hume and Immanuel Kant), Rasmussen and Pruss turn in chapter four to what is arguably the most innovative aspect of the book, namely, the development and defense of a variety of modal arguments from contingency. Chapters four through six are devoted to the defense of two modal arguments from contingency in particular, “The Modal Argument from Beginnings” (4.2) and “The Weak Argument from Beginnings” (5.3) (including a novel contribution to the area of modal epistemology in chapter six). Due to space limitations, I will focus exclusively on “The Modal Argument from Beginnings” (MAB) for the existence of a CNB. MAB relies on the following modal causal premise: “for any positive state of affairs s that can begin to obtain, it is possible for there to be something external to s that causes s to obtain” (p. 69). From this modal causal principle, together with the premise that it is possible for there to be a beginning of the state of affairs being the case that there exist contingent concrete things, it follows not only that it is possible that a CNB exists, but that a CNB does in fact exist (by modal system S5 which I explicate briefly above). Note what MAB does not affirm: that the state of affairs being the case that there exist contingent concrete things must actually have an external cause or explanation. In employing a weaker causal principle than standard arguments from contingency, the authors contend that MAB avoids all the standard objections that are thought to weaken traditional arguments from contingency—e.g., MAB allows for the possibility of (i) an uncaused contingent thing, (ii) causal loops, and (iii) wholly “internal explanations” (p. 72).

In chapter eight, “The Argument from Perfections”, the authors consider yet another argument for a CNB that is inspired by the work of Kurt Gödel. Call a “positive property” a property that confers some degree of value on its bearer. We can briefly summarize “The Argument from Perfections” as follows. Consider the property existing necessarily (N for short) and the property possibly causing something (C for short). Given several plausible assumptions (viz., that if A is positive, then ~A is not positive and if A is positive and A entails B, then B is positive) it follows that if N and C are each positive properties, then their conjunction, N&C, is possible (see the argument from reductio for this modal claim on p. 151). And if it is possible that a necessary being that can cause something exists, then such a being actually exists (again, given the modal system S5: possibly necessarily p implies necessarily p).

Readers of The Journal of Biblical and Theological Studies will perhaps benefit the most from the author’s sound rebuttal of historically influential arguments against the existence of a CNB from David Hume and Immanuel Kant. Chapter three considers and refutes five standard Humean arguments (the conceivability of non-existence, universe as necessary being, the plausibility of a conjunctive explanation of the universe, the fallacy of composition, no contradiction in there being an uncaused, contingent being) and two Kantian arguments against the existence of a CNB (that arguments from contingency rely on the ontological argument, existence is not a property). Much of contemporary theology has, for too long, lived in the shadow of Hume and Kant regarding the cogency of philosophical arguments for the existence of a necessary being. Rasmussen and Pruss are to be commended for not only subjecting these well-worn criticisms to withering critique, but for their constructive contribution and defense of the concept of concrete, necessary existence in philosophical theology and metaphysics.