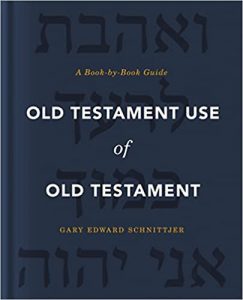 Gary Edward Schnittjer is the Distinguished Professor of Old Testament for Cairn University’s School of Divinity. Schnittjer received his doctorate from Dallas Theological Seminary and has completed post-graduate studies in both Hebrew and Aramaic from the University of Pennsylvania and Westminster Theological Seminary, respectively. He has published numerous articles in various aspects of Old Testament Biblical studies as well as another monograph, The Torah Story.

Old Testament Use of Old Testament: A Book-by-Book Guide represents the culmination of two decades of research into the intertextual and linguistic connections within the Tanakh by Schnittjer. The book is a cataloging, book-by-book, of exegetical allusions between the books of the Old Testament, rated according to their strength (read: confidence level). Material for the work was compiled from manual research and material generated from an originality program, iThenticate (xlvii).

In its introduction, Schnittjer provides the basic definitions used in the field of intertextuality and his work, such as revelation, allusion, and exegesis (xviii-xix). Surveying the work and methodologies from scholars like Hays, Kugel, von Rad and Fishbane, Schnittjer lays out his criteria for determining allusion and model for interpretation, siding more closely with Hays than the other three (xli). The remainder of the introduction lays out the content and form of the subsequent chapters. Before closing, Schnittjer has this to say to scholars. “Is this reference study comprehensive? No and yes.” By no, Schnittjer means that a total cross-reference of intertextuality for any book, much less the Tanakh, is impossible. By yes, Schnittjer means that this work does seek to capture every leading use of Scripture in every book of the Hebrew Bible. After this aside, there is a brief listing of other sources and lists of intertextual links.

The bulk of the book takes up the charge of implementing that methodology. Following the Tanakh ordering of the Old Testament, as opposed to the traditional Christian arrangement, Schnittjer lays out each chapter similarly. First, there is a listing of the siglia, followed by a condensed summary of all significant detectable links within the book. Schnittjer then adds in the hermeneutical profile for the book which gives a broad overview on how that book intertextually relates to others. Critical issues regarding the identified links and peculiarities of the book follow. Each chapter ends with a more verbose discussion of significant textual links, broken out by the context of the link, and their meaning for the book as a whole.

After finishing the books of the Old Testament, Schnittjer adds in one final chapter, which casts a vision for how the Hebrew Bible leads into the New Testament. This chapter is refreshingly rich and brings out the concept of the canonical consciousness and how Scripture seeks to bear witness to the Spirit and Word (872). Schnittjer highlights those multifaceted contexts and horizons that the New Testament authors use to bring the story of Scripture to its zenith in the coming of Jesus. A brief discussion of common linked themes, what Schnittjer calls networks (873), and a glossary appear at the end of the book.

Positively, this book represents a treasure-trove of academic effort. Schnittjer’s work has created an impressive reference text of intra-Old Testament linkage in a field that previously lacked any such comprehensive catalog. If not a complete catalog of every significant intertext in the Hebrew Bible, it is assuredly nearly that. Schnittjer elevates his work too beyond just a mechanical record through his detailed notes on how each book tends to use intertexts and relates to others. Readers are left not only knowing where significant links occur but also why the biblical author has used other texts. Old Testament Use of Old Testament should be a core reference text for any scholar doing substantial work in the Old Testament.

Schnittjer too should be praised for his introductory chapter, which provides one of the most straightforward and broad introductions to the field of intertextuality that this author has read. Intertextuality is notoriously tricky to pin down succinctly. It is a discipline that has shifting definitions between authors and can prove troublesome to the uninitiated. Schnittjer’s introduction offers potential students of the field a boon with his work as it is an excellent starting point covering all of the critical considerations and positions in a short space. Furthermore, Schnittjer’s engagement in the field is refreshingly non-sectarian and robust. The text engages with leading authors from numerous backgrounds and traditions, and this only aids its value as an introduction to the field. To provide just a sample, Schnittjer references: Fishbane, Hays, Kugel, Kynes, Miller, Schultz, Sommer, von Rad, Witherington III, and others just in the introduction.

Critically, one may question the rating system employed by Schnittjer because the method, at points, is driven by the evidence and not the evidence by the method. For example, the B level of confidence, the second-best link quality, requires only a single Hebrew root to define a link. Why such a low bar? Schnittjer explains, “It may seem disappointing to have such a low threshold of evidence: one term. Unfortunately, there are a few cases that require this” (xxiii). That means though, that Schnittjer has tailored the method to fit the evidence, contrary to sound practice. While the link given as evidence for this, Josh 9:6-7 cf. Dt 20:15, may be a significant link, this is a weakness in the principles undergirding the method and may weaken Schnittjer’s data, allowing weaker links to appear stronger than they are.

A second criticism may be leveled at the omission of some potential intertexts. There are occasional gaps in Schnittjer’s list that are present in the works he lists as possible parallels. One example is the linkage between Hab 1:2 and Job 19:7. These two texts share several roots, and indirectly share every noun and verb. This link is not mentioned by Schnittjer, who instead links Job 19 on weaker evidence to Lam 3:6-9 (557), despite the Hab-Job connection being covered by Anderson, whom Schnittjer lists as a resource for Habakkuk. Such omissions are to be expected in such pioneering and expansive work, but also point out that continuing efforts are needed in this area.

Overall, Old Testament Use of Old Testament is a significant work in the fields of intertextuality and Old Testament biblical studies. It provides a reference point for future investigations into how the Hebrew Scriptures built upon themselves and how Scripture interprets itself. Students should approach this text as a model for how scholars can weigh and determine the strength of exegetical links in a text. Schnittjer provides not only a model but also extensive reasoning and discussion of significant links. This text will help students become familiar with the field of intertextuality as well as the critical questions faced within the sub-discipline. The quality of scholarship and breadth of material easily makes Schnittjer’s Old Testament Use of Old Testament a first-tier reference work for scholarship. 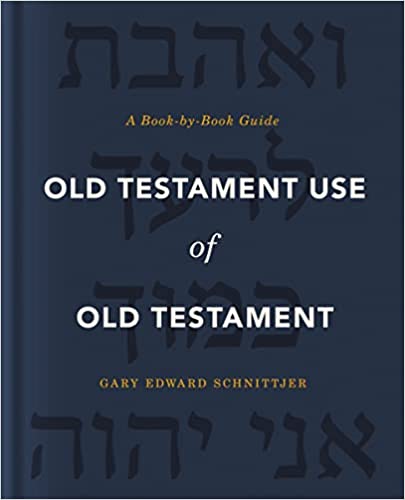