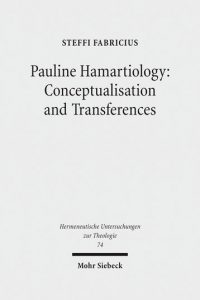 Steffi Fabricius is a postdoctoral fellow at the University of Siegen where she also teaches theology. She earned her PhD in Systematic Theology at the Technical University of Dortmund where she has also worked as a research assistant in the English Linguistics department. The book under review is a slightly adapted version of her doctoral dissertation similarly titled Pauline Hamartiology: Conceptualisations and Translationes. Positioning Cognitive Semantic Theory and Method within Theology. Fabricius’ research interests lie at the intersect of theology and cognitive linguistics and the current work is a formidable example of this kind of interdisciplinary work.

In the very short introductory chapter, the author presents a brief sketch of what she will be arguing throughout the book. Though not an explicit thesis, Fabricius suggests that in Paul’s undisputed epistles we see six conceptual metaphorical mappings that shape his experience and understanding of ἁμαρτία as an existential powerful state: ἁμαρτία as an action, ἁμαρτία as an event, ἁμαρτία as an object, ἁμαρτία as a state, ἁμαρτία as a power, and ἁμαρτία as a slave master (3). Chapter 2 introduces the state of research on Paul’s understanding of ἁμαρτία. After reviewing proposals for personifications of sin stemming out of the concept of sin as action (Röhser, Käsemann, Dibelius), sin as demonic entity (Hagenow, Southall, Gunton), and sin as a power (Umbach, Carter), Fabricius observes that scholars often “emphasise one specific attribute of sin and thereby seem to lose the original multi-layeredness of Pauline thought” (25).

The next two chapters lay down the methodological foundations for Fabricius’ approach to Paul’s use of ἁμαρτία. Chapter 3 introduces the reader to the classical theory of language and categorization as well as to what the author terms the “cognitive turn” and the tools of cognitive linguistics she will be employing. Chapter 4 then positions cognitive semantics within the discipline of theology. Here, she rejects Aristotelian substance ontology (85) and proposes a relational ontology that is grounded on metaphorical language.

Fabricius refers to chapter 5 as the major analytical chapter of her study, which takes up 131 of the book’s 267 pages of core content. The chapter is divided into eight subsections and a conclusion, each building on the previous and ultimately developing the author’s main argument. She begins by employing Langacker’s cognitive grammar to establish ἁμαρτάνω as the morphological and conceptual base of (ὁ) ἁμαρτωλός and ἁμαρτία. She examines Paul’s language to show the Apostle’s conception of ἁμαρτία first as an action and ultimately as the mega-metaphor of ἁμαρτία as an existential powerful state via the Event-Structure metaphor (170ff). The chapter ends with a series of subsections looking at how σάρξ, νόμος, θάνατος, and Χριστός fit into her “mega metaphor.”

Unfortunately, perhaps one of the first things readers might notice as they progress through the book is the frequency of awkward English constructions, grammatical mistakes, and unclear terminology. Because the book itself is already very technical and much of the jargon assumes a lot from the reader in the areas of philosophy (e.g. the distinction between reality and actuality, ontic and ontological) and cognitive linguistics (e.g. translatio, verborum metaphora, idealized cognitive models, running blends), the occasional hurdles with the English can make the book feel tedious at times.

I bring this up first because readers should know that the benefit of having Fabricius’ detailed and relevant exegesis in English (rather than in her native German tongue), more than makes up for the occasional obstacles of her English.

The core of Fabricius’ argument, namely, that ἁμαρτία is conceptualized by Paul as an existential powerful state is very well presented and compelling. Fabricius speaks competently about the various ways ἁμαρτία has been understood by theologians and New Testament scholars and places her own research well within the contemporary conversation. One of the most illuminating insights pertains to how Paul’s multivalent conception of ἁμαρτία must be understood in light of the metonymically related conceptualization of ἁμαρτία as an action, ἁμαρτία as an event, ἁμαρτία as a state, and ἁμαρτία as a power. Fabricius carefully shows how the conceptual mappings of the Event-Structure metaphor action is motion and events are actions work together with the metaphors states are events, change is motion, and causes are forces to hold these various elements together.

The detail and breadth with which she builds her cognitive semantic argument is fascinating and robust. The book would have made a significant enough contribution to the field had she simply presented her case for ἁμαρτία. By then placing σάρξ, νόμος, θάνατος, and Χριστός within the Apostle’s conceptual network, Fabricius ends up providing an incredibly helpful conceptual anthropology. It was not always clear, however, why Fabricius ordered the hypothetical syllogisms with active enclosing containers the way she did. For example, in Figure 19, she places postbaptismal ontic existence ἐν Χριστῷ and ἐν πενύματι within the container of existence ὑπὸ χάριν rather than the other way around (208). Certainly, an argument could be made either way, but an explanation for her ordering is missing.

More significantly, some of Fabricius’ broader anthropological conclusions about the Christian’s relationship to sin don’t seem to fit very well with the exegetical and cognitive linguistic analysis she presents. She rightly notes that though postbaptismal man is now free to walk κατὰ πνεύματα and not κατὰ σάρκα, he is still ἐν σαρκί. It follows, then, that ἁμαρτία still exerts pressure on the Christian because of his existence ἐν σαρκί. However, Fabricius goes further and says that sin can still exercise dominion on the believer and that though he is no longer ὑφ’ ἁμαρτία, he is still nonetheless ἐν ἁμαρτία (215). Moreover, she concludes that “with the Christ event turning man postconversionally into Christians, man as slave is torn between two masters…he is still attached to the old one with the fleshly body” (229). Though the reader might expect her to conclude that the Christ event has utterly freed the Christian to his old master ἁμαρτία, Romans 7:15–23 seems to give Fabricius pause in suggesting that. Though she acknowledges the interpretive debates on Romans 7 in a footnote, one would expect a more robust defense of her interpretation of Romans 7, especially as it seems to undermine some of her fundamental conclusions about Paul’s conceptual understanding of being ἐν ἁμαρτία and ἐν Χριστός.

Overall, Fabricius’ work is one of the most comprehensive and compelling treatments of Paul’s understanding of sin. Her work makes important hermeneutical, hamartiological, and anthropological arguments that need to be considered in the fields of theology and biblical studies. My only fear is that the technical nature of her study, the familiarity with the subject matter she assumes from her readers, and her interdisciplinary approach might prove too daunting for many who would otherwise benefit greatly from it. 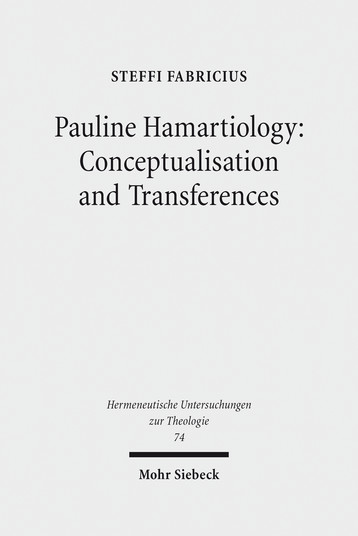