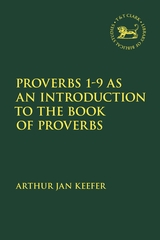 Arthur Jan Keefer is Master of Divinity and Chaplain at Eton College.  He earned his PhD at the University of Cambridge.  Keefer is scheduled to release The Book of Proverbs and Virtue Ethics (Cambridge University Press) in Oct. 2020.

Proverbs 1—9 as an Introduction seeks to articulate the function of Proverbs 1—9, particularly how it functions with Prov 10:1-22:16 (1).  The study was inspired by professor J.J. Collins (vii).  Keefer divides the book into four chapters: Introduction, Character Types, Educational Goals, and Theological Context. This review will begin with a summary, followed by a critique, with recommendations at the end.

Keefer claims that Prov 1-9 functions as a key or interpretive guide for Prov 10-31 (3). Two elements motivate Keefer’s research: (1) the interpretive challenges found in Proverbs 10-29, and (2) the promise made in Prov 1:1-7 that the reader will be able to understand the proverbs and sayings within the remainder of the book (1-2).  Keefer finds the proverbs of chapter 10-29 as the interpretive challenge because they are pithy and base themselves off of assumptions (1).  His study treats Prov 1-29 as a whole, not as an editorial work with the addition of Prov 1-9 added later (30).  Also, he does not want the reader to view the study as diachronic, i.e., Prov 1-9 was written after Prov 10-29, but Keefer doesn’t want the reader to view his work strictly synchronically (33).  Rather, Keefer wants to show that the interpretation of the book is unidirectional, where Prov 1-9 serves as an introduction to Prov 10-29 (33). Yet, Keefer also chooses to examine the interpretive reciprocity between Prov 1-9 and Prov 10-29 (33).  Keefer seeks to demonstrate the predominantly unidirectional interpretation by comparing and contrasting how the two divisions discuss characters, educational goals, and theological contexts.

Keefer uses the characters of Proverbs to establish a connection between two sections of Proverbs.  Keefer finds that Prov 1-9 provides an interpretive lens to examine Prov 10-29 (92).  With the education goals, Keefer discusses how each section contributes to the main objective of Proverbs, which is to teach (93-94). He concludes that Prov 1-9 operates pedagogically by providing a framework of educational goals and a moral vision of creation for Prov 10-31 (141). Within the chapter on theological context, Keefer shows the didactic function of Prov 1-9 as it concerns the Lord and God as the Lord’s attributes portrayed in Prov 1-9 serve as an interpretive key for proverbs like Prov 22:19 (167). Also, within the chapter, Keefer finds that Prov 1-9 does not serve pedagogically for some of God’s attributes, but rather, the book of Proverbs is unified in theological conclusions (182).  Keefer finds that the theological unification further supports his thesis by establishing a baseline continuity within the book (182).

Keefer provides a plausible argument that Prov 1-9 functions as an interpretive guide for Proverbs 10-29.  He chooses well thought out representative examples from Proverbs.  Each proverb typifies interpretive challenges found elsewhere in Proverbs. So, with only a few examples, Keefer can show that his argument works for multiple proverbs.  His choice of text also led to conclusions that at times were surprising. One such surprising conclusion came from his analysis of Prov 16:9. Proverbs 16:9 mentions that man plans his ways, and the Lord directs them. The reader may expect Keefer to conclude that the Lord’s will domineers a man’s plan, portraying man’s plans as worthless.  But Keefer finds that through the interpretive lens of Prov 1-9, that man can plan his ways through receiving and using the wisdom of the Lord (159).

Keefer’s study of the characters is one of his most convincing arguments.  He argues that Prov 1-9 provides a “framework of rhetorical categories” that elaborates upon or provides additional information to interpret Prov 10-29 (90-91). Keefer proposes that Prov 1-9 establishes the core teaching and functions of the characters that elaborate upon or supplement the reader’s understanding about the characters of Prov 10-29 (91-92). Also, he suggests that the two sections of Proverbs may function in a coreferential manner that encourages the reader to reflect upon the persona’s moral fiber (91). Keefer ties his conclusion on characters well within the remainder of his book, which positively adds to the argument of the book.

Some points of his argument are not as strong as he presents them to be.  For example, two points fall short of being definitive in arguing for the importance of the prologue as an interpretive guide.  First, Keefer references the prologue of Ben Sira to serve as explanatory prose for Prov 1-9 (11). However, Keefer himself acknowledges a weakness that Ben Sira is “more reminiscent of Greek historical works” (11). Second, Keefer cites a scribal technique known as ‘revision by introduction,’ which is the process when a scribe supplements a pre-existing text with an explanatory introduction, and it is evident in text through hard (ex. “extant textual witness to attest to variations in the material” or soft evidence (inconsistencies within the final form of a text”) (12).  Keefer states initially that the scribal technique is plausible, but the phenomenon is only observable, if an actuality, as soft evidence in the OT, yet Keefer states this is enough evidence to create a precedent for considering Prov 1-9 as an introduction (13). He uses Mesopotamian literature to make this point (12). Using these scribal practices along with Ben Sira produces a tension created from unanswered questions of dating and scribal practices that weaken the arguments. In addition, presenting this evidence appears to be in tension with his objective of not viewing Proverbs as an editorial work and requesting the reader to not view the study as diachronic or synchronic (30, 33). However, the entirety of Keefer’s argument does not rely on either of these arguments.

Keefer’s book will serve both the church and the academy well. Pastors, seminary students, and scholars will find this book helpful in the study of Proverbs, yet, like most books in the Library of Hebrew Bible/ Old Testament Studies series by T & T Clark, the scholar will benefit most.  The book can function well in two ways: (1) a study of the unity of Proverbs, (2) a preliminary hermeneutical model for Prov 10-29.  Additionally, scholars will find that Keefer’s work provides a new foundation for future study. With Keefer only able to study a few representative proverbs, Scholars will need to further advance Keefer’s studies in order to determine if the representative examples apply to those proverbs being represented, and they will need to determine if Keefer’s model works with proverbs not represented in his study. Yet, Keefer’s work advances studies in Proverbs with its plausible arguments for Prov 1-9 as an interpretive guide for Prov 10-29.