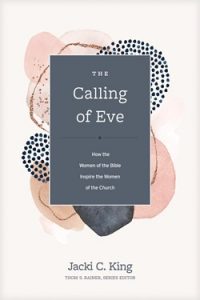 Jacki C. King holds a master’s degree in theological studies from Southwestern Baptist Theological Seminary and serves as a Bible teacher. Despite juggling life as an author, blogger, podcast host, pastor’s wife, and mother of three, Jacki King thinks of herself as “just a normal girl.” While such achievements exceed what society or even the church considers normal, King’s standard of reference does not come from society or the church but from the women of Scripture.

King begins her book by describing how her understanding of the importance of women’s roles in the kingdom was formed in the context of the local church but subsequently shaken in the church. Lacking the stereotypical qualities the church emphasized as most important among women, the young King questioned whether following and serving Christ meant being someone other than, well, her. Her leadership gifting and devotion to Christ and his church seemed undeniable. Nevertheless, King felt little connection to the demure image the church expected women to portray. King describes her younger self as loud, extroverted, energetic, and clumsy. Finding herself vastly at odds with the superwoman depicted in Proverbs 31 (which King would later come to recognize as a personification of wisdom), King turned to the rest of Scripture to uncover a more accurate understanding of biblical womanhood.

Drawing from the first two chapters of Genesis, King presents a theological anthropology of women in a simplified manner that is easily accessible to a lay audience. Having already extracted the “fear of the Lord” from Proverbs 31 as foundational to biblical womanhood, the author explores with readers how Scripture defines their identity as image bearers and establishes their purpose. While acknowledging the commonalities men and women share in these areas, King also recognizes distinct differences, such as the woman’s role of “ezer,” a term markedly misunderstood and underestimated in the contemporary church. King endeavors to help women understand God’s intention for them to, along with men, reflect his image, exercise dominion over his creation, and commit their lives to his glory,

Beginning with the third chapter, King pivots her focus to how women can flourish and carry out their divinely appointed purpose within whatever sphere or circumstance God may place them. She explores what it means for women to flourish as image bearers and submit to God’s purposes in (1) singleness, (2) marriage, (3) motherhood, (4) work, (5) mission, (6) church, (7) justice for the vulnerable, and/or (8) leadership. King highlights female exemplars from Scripture and modern-day women who stand out in fulfilling God’s purposes in each of these categories. For example, in her chapter on justice for the vulnerable, King spotlights Rachael Denhollander, whose courageous stand against Larry Nassar ended his decades-long spree of sexually abusing girls and young women. The author then explores women of Scripture who exemplified the same courage, such as the Hebrew midwives of Exodus who risked their own lives by refusing to kill infant boys. No matter what their circumstance, King notes that God has placed a calling and commission on every redeemed woman’s life.

With this book, King aims to help women catch a vision for flourishing as image bearers and fulfilling the cultural mandate—and the Great Commission—according to their design and God’s purposes. King has a gift for conveying critical theological truths in easy-to-understand language. Such skillful writing lends toward accomplishing her goal.

King’s eighth chapter, “Women in the Church,” provides substance for contemporary ecclesiological debate. Writing from a complementarian perspective, the author nonetheless laments the disturbing tendency of church leaders to accent limitations on women’s roles rather than freedoms. Juxtaposing such restrictive attitudes against Romans 16, King highlights women who worked hard, sacrificed, became imprisoned, and risked their lives alongside Paul for the gospel’s sake—each of whom Paul esteemed and honored by name in his letter. Consequently, King asserts that outside of the office of elder/bishop/pastor, “women are able to lead, teach, serve, and love in the same way the faithful sisters in Romans 16 lived out their giftedness in the early church” (p. 106). Likely, King will garner pushback on this statement from those who embrace a more restrictive view of complementarianism. Considering her exposition of the text, however, critics will face a challenging task in arguing with her.

One weakness of King’s work is her over-reliance upon the created identity found in Genesis 1 and 2 in her discussion of identity. While created identity is crucial to an accurate understanding of self, it is shared by all image bearers—all human beings—regardless of whether they are spiritually dead or alive in Christ. Believers wishing to flourish in the kingdom must also live in light of their redemptive identity received through union with Christ upon salvation. Not only do believers bear God’s image, but they also bear, in increasing degrees, Christ’s image. Adam and Eve were naked before the fall, but believers are clothed in the righteousness of Christ and filled with the Holy Spirit. Whereas the Old Testament focuses on created identity, the New Testament shifts its gaze toward redemptive identity–which is given only to God’s elect. I believe King applies this perspective, but it does not appear in chapter two’s discussion on identity.

While King writes The Calling of Eve to inspire women of the church, her book could and should be used also to inform the church. Women wrestling with how they can fit into and serve God’s kingdom should indeed read the book. However, pastors, ministry leaders, and seminary faculty and students who do or will shepherd or teach women should also read it to equip themselves for encouraging, empowering, and promoting the flourishing of the women they serve. 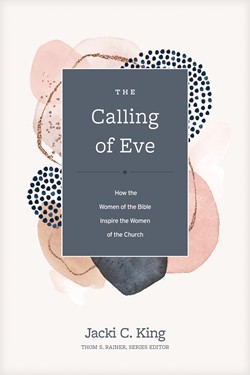