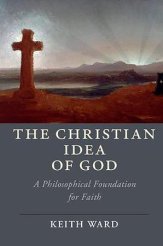 Keith Ward, Regius Professor of Divinity (Oxford University) and Professor of Philosophy of Religion (University of London), launches in this book a thorough case for what he calls personal idealism. While this book builds successively on previous publications (particularly More than Matter? and Christ and the Cosmos), it explores in further depth the fruitfulness of framing the Christian faith within an idealist framework. Ward is a stern critic of materialism and in The Christian Idea of God he gives further reasons for maintaining that mind is prior to matter.

The first part, “The Nature of Mind”, explores the distinctiveness of personal idealism, the epistemic priority of experience, and the objectivity of value (chapters 1-7). On this version of idealism, there is no strict separation between the universe and God; rather they form a unity, “though one in which the mental or spiritual aspect has ontological and causal priority” (p. 11). Indeed, the universe should be understood as a developing and progressing self-expression of God.

But, why should we take idealism to be true and what can be said in favour of this position? A case for idealism begins with the particularity of human experiencing. Drawing on an empiricist epistemology, Ward argues that all knowledge begins with experience and that the phenomenon of experiencing goes beyond purely material categories. Perceptions, for example, do not seem to be the kind of things that belong to the categories of space-time (p. 28). We place our perceptions in public space, yet perceptions themselves belong to a “private two-dimensional space” which is not shared by other people. Hence, given that experiencing transcends material categories, and that experience is our inevitable starting point in our interaction with the world, we have positive reasons for believing in the primacy of the mental. Without a mind-like reality there would be no physical reality. Indeed, this is why Ward says that almost “all believers in God are idealists in some sense” (p. 49).

A key argument in Ward’s book is that God is the most plausible interpretive hypothesis of the totality of human experiencing. The intelligibility, elegance, and beauty of the physical world seems to call for “some underlying wisdom or intelligence” (p. 57). This should not be understood as a proof of God. Rather the idealist hypothesis invites us to consider “the cosmos as “an expression of immense power and wisdom” (p. 57).

The second part of the book focuses on the nature of the “Ultimate Mind” and the relationship between God and Creation (chapters 8-14). In chapter 8 Ward explains more his idealist stance and contrasts his own idealism with the “immaterialist idealism” of Bishop Berkley. Ward stresses that he does not deny the reality of matter and he argues that human minds emerged, in some way, from complex physical structures (p. 99).

In contrast to a pessimistic materialism, a personal idealist view of nature invites purpose and teleology within nature. That is, “If the universe is a product of mind, then it obviously exists for a purpose. It has a goal, and the goal will be realised” (p. 101). This particular universe has been chosen to realise certain valuable states, including the emergence of human minds. This is not to say that the universe was created as a perfect and deterministic system. Rather, it is a “growing organic system” which progressively realises its potentialities (p. 124).

In part three, Ward addresses more explicitly the theological dimension to personal idealism, including the eschatological culmination of creation and the revelatory importance of Jesus Christ (chapters 17 and 22). While Ward admits that one can embrace personal idealism without being a Christian, he still thinks that there is a “natural affinity between Christianity and personal idealism” (p. 221). As suggested, Ward argues that personal idealism entails a teleological view of creation, whereby purpose is a real feature of the natural order. From this idea follows that divine action is not something to be figured out, but its role should be acknowledged as a basic aspect of the “unfolding of the processes of the cosmos” (p. 204). If the universe, as it is claimed on an idealist perspective, originates in mind, then there is a final cause for the emergence of the cosmos as a whole. Ward is careful to distance his own approach from the interventionist understanding of divine presence as interruption of the causal nexus, suggesting instead that we should recognise God’s ongoing involvement in the world in participatory terms.

Ward articulates successfully the relevance of personal idealism for Christian theology and the intimate connection between theism and an idealist outlook on reality. He shows in a clear manner why idealism should be taken seriously by those who believe in a personal God that is involved in the destiny of the world. Ward’s argument for the priority of mind and its implications for our understanding of the universe is highly interesting. However, as I see it, Ward needs to clarify two parts of his argument in order to strengthen this offered idealist position.

My first concern is with regard to Ward’s argumentative step from the irreducibility of experience (or mind) to the priority of experience. This book outlines several positive reasons for thinking that experience goes beyond reductionism and physical explanations. Yet, there seems to be no necessary relationship between the irreducibility of experience and the idealist thesis that mind is more fundamental than and prior to the physical. One can hold that mentality or human experiencing is irreducible with regard to physical stuff—both property dualists and substance dualists do—without committing oneself to an idealist ontology. This remains a significant gap in Ward’s argument that needs to be closed.

A second issue concerns Ward’s definition of idealism. As I said above, Ward takes issue with and rejects a Berkley idealist denial of the reality of the physical. Physical phenomena are real but depend on God—an ultimate mind—for their existence. Moreover, human minds seem to emerge from material phenomena. This, to me, sounds like theism coupled with an emergentist view of the mind, but not necessarily a form of idealism. It seems difficult differentiate Ward’s idealism from a generic theistic claim that the physical is dependent on God. Indeed, Ward’s articulation of idealism becomes even more confusing when he sides with the emergentist view of human minds as derivate from the physical. Ward attempts to carve a path between Berkeleyan idealism and materialism, but the idealist component of this philosophical articulation of the Christian faith remains unclear.

Having said that, Ward provides a robust challenge to materialism and a sophisticated defence of the irreducibility of mind. This book is written in an accessible way and is suitable for students, scholars, and lay people interested in the relationship between theology and philosophy.