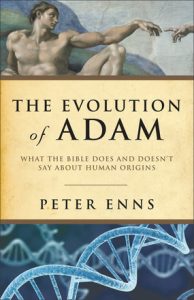 Is there a conflict between evolutionary theory and the Christian reading of Genesis 1–11? Peter Enns (Ph.D., Harvard University), Abram S. Clemens Professor of Biblical Studies Eastern University, writes The Evolution of Adam to answer this very question. Enns’ premise in the book not that Adam evolved but that Christian thinking about the historical Adam should evolve because of two key ideas: “(1) scientific evidence supporting evolution and (2) literary evidence from the world of the Bible that helps clarify the kind of literature the Bible is––that is, what it means to read it as it was meant to read” (xiii).

The argument for Enns’ perspective of the historical Adam is laid out in two parts. The first part of Enns’ book in “Genesis: An Ancient Story of Israelite Self-Definition” (chapters 1–4) address the story of the history of Israel, and the section part “Understanding Paul’s Adam” (chapters 5–7) examines Paul’s perspective of the historical Adam. Enns’ concludes with “nine theses” pp. (137–148). Chapters 1–4 approach the historical Adam’s issue through a historical-critical perspective, which treats Genesis and other ancient Near Eastern parallel origin stories as theological myth (pp. 23–37). In essence, Enns and others approaching the Pentateuch as theological myth believe that the narratives in Genesis through Judges “embellished the event to serve another purpose” (p. 62).

Section two (chapters 5–7) argues that Paul’s presentation and reading of the historical Adam are based on similar first-century assumptions and beliefs that Jews held about the Genesis narrative (p. 95). This means that Paul held conventions about creation that reflected his cultural context and not the present readers’ context (i.e., scientific revolutions). The Last section is a brief chapter, including nine theses that cover the entire work’s argumentation. The nine theses are summarized as follows:

With the basic argumentation of Enns outlined, what are the strengths and weaknesses of The Evolution of Adam? The work’s strength is advocating for a complexity thesis between the sciences and Christian reading of the Genesis text. Evangelicals are guilty in the historical efforts to make science and a literal reading of Genesis agree in the most literalistic way (i.e., Ken Ham, Henry Morris III, Kent Hovind, etc.). Enns is right to note that much effort is expended on reading the Genesis narrative and Paul’s recapitulation of Adam through a very strict hermeneutic. For example, the primary question in Genesis 1–11 is not to set out an ontological and metaphysical system that critiques the ancient Near Eastern systems and creation theories. Genesis is a polemic to the surrounding culture, but it is more so about the reasoning behind why humans must die, not merely where do they originate from. This highlight of Enns’ work is the extent of its positive features for Christian scholarship.

Enns historical-critical examination and reading of Genesis 1–11 demonstrate the negative attribute of skeptical bible reading. For example, why is science the epistemological arbiter for discussing biblical origin narratives and the theory of evolution? Enns does not answer this question but instead assumes that there is no way to reconcile the two because they speak a “different language” (138). Does this not undermine the ability of historical-critical scholarship to use modern languages and semantic studies to understand ancient cultures and linguistics? Capturing a theological truth from a narrative-driven text does not mean that all literalness is devoid in their present stories.

Another issue that leaves the reader begging for clarification is Enns’ understanding of Paul’s reading of Genesis and Adam. Enns claims that Paul is merely reading in light of the first-century Jewish worldview. However, Paul is very far from the typical reading of Adam in the Talmud and Rabbinic thought. Adam was never considered in a negative light, as we see in Paul’s writing and his recapitulation of the Genesis narrative. Eve is always the source of blame in rabbinic thought. Adam was the first priest and walked with God. Paul is unique in his presentation of Adam as the original sinner. It seems that this fact, which perhaps Enns is either unaware of or ignores, would further challenge his premise that Paul did not believe in a historical or literal account of the man Adam. Paul is merely following the text’s logic in the Genesis narrative, “who does humans die?” His answers blame Adam instead of Eve alone. Thus, there is nothing to indicate from Paul’s treatment of the Garden narrative that it is merely theological fiction, as Enns suggests in chapter 7.

Enns commits the very exegetical crimes he is putting on trial—forcing the text to argue and say what it does not say. Likewise, evangelicals have been guilty of using the same logic to force scientific evidence to fit biblical narratives (i.e., the flood narrative). The most significant take away from this work is the danger of using one’s scientific paradigms to serve as epistemological arbiter. The Bible is a book of faith and works. It is both a work of history and theology revealed through a miraculous and supernatural event––God working through humans. 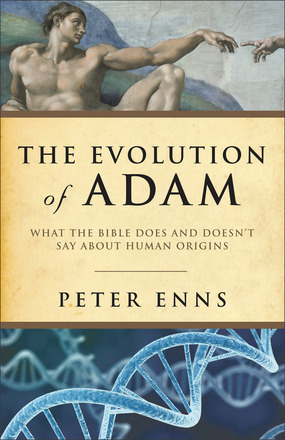