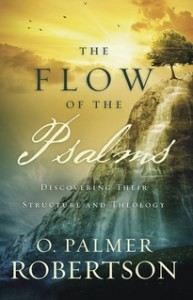 Palmer Robertson is director and principle of African Bible University in Uganda and is the author of many books, including The Christ of the Covenants (P&R, 1987), commentaries on the books of Nahum, Habakkuk, and Zephaniah in the New International Commentary Series (Eerdmans, 1990), and The Christ of the Prophets (P&R, 2008). His latest work, The Flow of the Psalms: Discovering Their Structure and Theology, represents one of the most recent contributions to the ongoing investigation of the “shape” and “shaping” of the Hebrew Psalter. Robertson’s burden in this book is to show that the Psalter is not a random collection of psalms; rather, it exhibits an intentional arrangement or “flow” from beginning to end (p. 50).

Two preliminary chapters precede Robertson’s attempt to demonstrate the presence of this “flow” within the Psalter. Chapter two draws attention to twelve different elements of basis structure in the Psalter, while chapter three is devoted to a discussion of the Psalter’s redemptive-historical framework. The heart of the book then follows in chapters five through nine, where Robertson traces the predominant structural, theological, and thematic contours of each of the Psalter’s five books. The major thematic focus of Book I (Pss 1–41) is said to be confrontation. This book predominantly reflects the constant confrontation between Israel’s messianic king (i.e., David) and his enemies as he attempts to establish his messianic kingdom (p. 53). A prominent structural feature of this book is the strategic placement of four acrostic psalms (Pss 9/10, 25, 34, and 37) to divide this large book into smaller units and, thereby, to aid in its memorization (p. 81).

Book II (Pss 42–72) witnesses a progression from David’s personal struggle to establish his kingship to the struggle between the people of Elohim and their corporate enemies (p. 90). But while struggle continues, the psalmist’s effort to communicate a message of hope to his enemies arises as the distinctive message of Book II (p. 107). The thematic focus of Book III (Pss 73–89) is devastation. In these seventeen psalms, Robertson detects a shift in perspective to the corporate community of God’s people and their devastation by international forces (p. 122).

Robertson’s work contributes to the ongoing discussion of the Psalter’s canonical shape in at least the following three areas. First, it makes important methodological contributions. While, like other similar studies, he takes into consideration psalm titles, genre, and key-word associations, for Robertson the substance of the psalms “overrides all other considerations of structure” (p. 239; see also p. 52 n. 6 and p. 92 n. 8). Throughout the book he demonstrates how this focus has the potential to shed new light on the Psalter’s structure. To give only one example, even though Pss 49–50 and 51–52 are attributed to different authors, Robertson contends that an analysis of their content uncovers a chiastic structure that binds these four psalms together (pp. 90–95). Focusing primarily on the psalm titles in this section of the Psalter, previous studies (e.g., Wilson’s Editing of the Hebrew Psalter) have overlooked this possibility. A second methodological contribution is the way in which Robertson attempts to take all of the evidence into consideration in reaching conclusions about the Psalter’s structure and message. For example, rather than concentrating only on psalms that most clearly support his thesis, Robertson attempts to show how each of the seventeen psalms in Book III supports his contention that the book’s major theme is “devastation” (pp. 122–146). Such is a welcome corrective in an area of study where, all too often, claims about the Psalter’s structure or message are based primarily upon a select group of psalms, such as those appearing at the opening or closing “seams” of the five books (e.g., Wilson’s The Editing of the Hebrew Psalter [SBL, 1985]; deClaissé-Walford’s Reading from the Beginning [Mercer, 1997]).

A further contribution is Robertson’s concern to trace the pastoral implications of the Psalter’s canonical shape. An illustration of this concern comes from his discussion of the structural role played by acrostic psalms in Book I. He observes that Pss 34 and 37 bracket four psalms of the innocent sufferer (Pss 34–37) and are followed by four psalms of the guilty sufferer (Pss 38–41). Robertson then points to the pastoral value of his structural observations: “a pastor who is aware of the bracketing function of acrostics 34 and 37 could be significantly helped in counseling persons struggling with either innocence of guilt in their response to suffering” (p. 80). Another example is found in the conclusion of this same section. Robertson discusses how attention to the structural role of the acrostics in Book I “could serve as a great blessing for the church of Jesus Christ today” by aiding in memorization of the majority of the book (p. 82).

A final contribution to be mentioned is the author’s suggestion that the structure of the Psalter may have impacted the New Testament authors’ usage of psalms. Robertson asks, for example, how John, Luke, and Paul could use the same psalm (i.e., Ps 69) to support four different aspects of redemptive history (p. 117). In response to this question, he suggests that “the position of this psalm immediately after the “dialogue” between the cry for help of the messianic king and the affirmation of God’s undisturbed reign (Pss 61–68) could provide a partial answer” (p. 117). Similarly, he suggests that the quote from Ps 82:6 in John 10:34 may have been based upon the author’s knowledge of the psalm’s broader context. According to Robertson, this context is a deliberately arranged group of psalms (Pss 77–83) that centers on Ps 80, a psalm presenting Messiah as God’s “Son” who suffers and is gloried (pp. 136–137).

This book will appeal to any serious student of the Psalter. Accessible enough for the novice, especially those looking for an entry point into the exciting study of the Psalter’s canonical shape, Robertson’s thought-provoking analysis and interaction with the scholarly literature makes this book both appealing and valuable to the specialist as well. The Flow of the Psalms is a welcome contribution to Psalms studies. 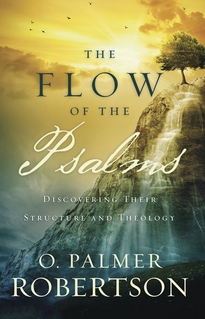