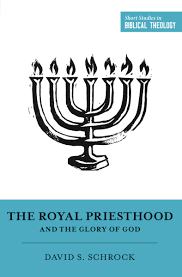 The Royal Priesthood and the Glory of God by David S. Schrock is a modest monograph about how the glory of God is fully revealed in the royal priesthood of Christ. This abbreviated work of biblical theology focuses on the biblical theme of priesthood to demonstrate how God’s glory is revealed in Christ’s righteousness expressed through the biblical concept of the priesthood. In an introduction, six chapters, and an epilogue, Schrock works through all of Scripture by sections to illustrate how the concept of royal priests is both central to understanding the metanarrative of Scripture and finds ultimate fulfillment in Christ. Like a classical work of biblical theology, Schrock works from the beginning of Scripture to the end, focusing on the development of the concept of biblical priesthood as Scripture unfolds.

In his introduction Schrock writes that the glory of God in the Exodus cannot be fully realized apart from the revelation of Christ in the New Testament (p. 15). Schrock states, “through the various phases of Christ’s priesthood, the glory of God is fully revealed” (p. 16). God’s glory, Schrock contends, is revealed through Christ’s “ministry of righteousness” whereby Christ grants righteousness to His people through “covenantal obedience, sacrificial death, victorious relationship, and heavenly intercession” (p. 16). Schrock claims that priesthood is central to redemptive history and the concept of glory, and this becomes Schrock’s core contention throughout the book (pp. 16-17). Schrock states, “The aim of this book is to study the priesthood so that we might delight more fully in the glory of God’s Son, our great high priest. Moreover, by learning the history and purpose of priesthood in the Bible, we will better understand God’s work in redemption” (p. 17). Schrock concludes the introduction by claiming, “In all, this book will chronicle the hard-but-ultimately-happy history of God’s royal priesthood. At the end of our journey, we will find a vision of royal priests worshiping God and serving alongside Jesus Christ” (p. 25).

One important and interesting point of focus for Schrock’s biblical theology of priesthood is the contention that God created mankind to be His priests in creation. Schrock claims that Adam and Eve were created to serve as God’s first royal priests to creation (p. 27). Schrock argues that the Garden of Eden was intended to be the sanctuary where Adam was placed to serve as a form of priest responsible for tending to God’s requirements, like the Levitical priests would do with the tabernacle or the temple later in Israel’s history (pp. 28-29). Schrock also claims that the Garden of Eden is reflected in the pattern of the tabernacle or temple with the outside world serving as the courtyard, the Garden serving as the Holy Place, and the top of God’s Mountain as the Most Holy Place (p. 29). Thus, Schrock suggests the purpose of mankind, created in the image of God according to Genesis 1:26-27, is to “mediate God’s presence” to all of creation as royal priests.

Schrock contends that Adam, the Patriarchs, and Moses all served the function of priests despite lacking the formal title. Schrock acknowledges that neither Adam, the Patriarchs, nor Moses were referred to as priests while they each lived, yet he argues they are all described in priestly terms, given priestly duties, and some were even referred to as priests later in Scripture (pp. 44-45, 53-54). Ultimately, according to Schrock, all these figures prefigure the supremacy of Christ as High Priest who reveals God’s glory completely (pp. 16, 23).

While not the focal point of the book, Schrock places an important emphasis on the role of the sacrificial system within the greater cultic system of worship in the Old Testament. Schrock notes how the cultic practice of sacrifice was introduced into the system of worship carried out by priests resulting from mankind’s fall into sin chronicled in Genesis 3 (p. 28). Schrock argues about the centrality of the sacrificial system to the duty of priests, saying, “every form of worship in the Old Testament centers on the priests and their sacrificial duties” (p. 68). In Chapter 5, Schrock notes how the sacrifice of Christ Jesus is the focal point of the Gospels and illustrate Jesus performing both the role of the high priest who makes the sacrifice on behalf of the people as well as the sacrificial lamb who dies for the sins of the people (p. 134-140). Through Christ’s dual role as the high priest and the lamb of God, Jesus fulfills the necessity of the sacrificial system and enables His followers to serve God once again as royal priests bearing His image to the world and reflecting His glory to creation (pp. 157-159).

While there are already some very good and helpful resources in the field of biblical studies (and, more specifically, the field of biblical theology) pertaining to the concept of the biblical priesthood, Schrock’s The Royal Priesthood and the Glory of God is an immensely helpful entry point for both “newbies” to the Bible and seasoned students of Scripture alike. Biblical-theological students will be challenged to examine the concept of biblical priesthood in a new light that will encourage their understanding of priests, the Law, the Levitical system, and the role Christ serves as the true High Priest. This is not a technical work on the biblical priesthood, though it is more thorough than a survey of what the Bible has to say on the subject. Further, this is not an in-depth treatment of biblical theology, though it is a sufficient one (the series this book belongs to is, after all, titled “Short Studies in Biblical Theology”). This book is a fresh take on a complicated and ancient system of worship that helps that complicated and ancient system make sense and, most importantly, unveils Scripture’s teaching on it in a way that both reveals Christ’s prominence in the system and how God is glorified through it all.