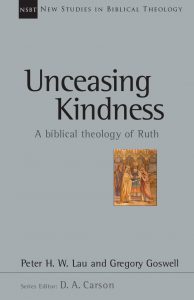 Peter H. W. Lau and Gregory Goswell collaborate in a recent addition to the series New Studies in Biblical Theology, Unceasing Kindness: A Biblical Theology of Ruth. Peter H. W. Lau is Lecturer in Old Testament at Seminari Theoloji Malaysia and is an honorary research associate at the University of Sydney. Gregory Goswell is the Academic Dean and Lecturer in Biblical Studies at Christ College, Sydney.

In writing Unceasing Kindness Lau and Goswell do not intend to compete with commentaries, nor to “render them superfluous” (p. 157). Rather, the authors seek to build on “close studies of the text” provided by commentaries in order to explore “its biblical-theological parameters” in the context of the whole of Scripture (p. 157). Lau and Goswell begin by reading Ruth alongside various texts in the Old Testament, drawing out themes found when Ruth is read in conjunction with other books of the Old Testament. The authors first read Ruth alongside Ezra-Nehemiah, seeking to understand how Ruth informed the readers of the “early restoration period” of Israel’s return from exile. Lau and Goswell then read Ruth in light of the various canonical positions Ruth is found: Ruth’s position between Judges and 1 Samuel (as in the LXX); Ruth’s position after Proverbs (as in the Masoretic Text); Ruth’s position before Psalms (as found in a canonical list in the Babylonian Talmud tractate Baba Bathra). In the last four chapters, the authors flesh out four themes found in Ruth and in the whole of Scripture: famine, God’s sovereignty and human agency, redemption, and mission.

Overall, Lau’s and Goswell’s work is an excellent resource for understanding the book of Ruth. The authors masterfully cover a wealth of information without overwhelming the reader. For example, Lau and Goswell skillfully critique Roger Beckwith’s arguments concerning the order of the Old Testament canon. The authors provide the reader with the essence of Beckwith’s dense argumentation without sacrificing his meaning (pp. 55-58). Throughout the book, Lau and Goswell clearly argue their positions and plainly elucidate the themes of Ruth.

Particularly illuminating are Lau’s and Goswell’s contention that Ruth should be read in the contexts of its various canonical positions. The authors maintain that the placement of Ruth in different positions in the canon “reflect the varying perceptions and evaluations of later generations of readers . . . and no one canonical position need be privileged above the others” (p. 22). Lau and Goswell emphasize that reading Ruth in different canonical places will not necessarily produce “wildly different” or contradictory readings, but will lead to “fresh interpretative insights” into Ruth (p. 38). The authors appeal to a phenomenon called ‘paratext’—coined by Gérard Genette—by which a text is “in large measure dependent on its context” (p. 37). A biblical book, therefore, is dependent on the context of the other books surrounding it (p. 37). Because in the history of interpretation, Ruth has been placed in differing canonical positions, Ruth “has been read in more than one context” (p. 37).

Whether or not one agrees with Lau’s and Goswell’s understanding of paratext, the themes the authors flesh out when Ruth is read in its different canonical contexts are very insightful. When Ruth is positioned between Judges and 1 Samuel, the events in Ruth are best understood as preparation for the Davidic dynasty. Furthermore, God’s care and provision of David’s family in Ruth anticipates the same care in the lives of David and his house (p. 35). When Ruth is read after Proverbs, Ruth is seen as a model of “key aspects of the wisdom ethic of Proverbs” (p. 52). Lastly, when Ruth is read before Psalms, Ruth is viewed as a “model of piety in the same variety” as her descendant David, who composed many of the psalms (p.70).

Readers may not agree with all of Lau’s and Goswell’s conclusions on some matters; for example, the authors’ view of God’s seeming absence in the book of Esther (pp. 97-102), and the authors’ explanation of Boaz marrying a Moabite woman in light of the prohibition in Deuteronomy 23:3 (pp. 146-49). However, these matters do not detract from the themes Lau and Goswell flesh out in the book of Ruth.

Series editor D. A. Carson notes in his series preface that the contributions to New Studies in Biblical Theology series are “creative attempts to help thinking Christians understand their Bibles better” (p. ix). To this end Lau and Goswell have succeeded. The authors write with clarity and their arguments are easy to follow. The book could serve as a required text in a seminary class or as a study book for a church group. While the book could serve the needs of a church study group, some level of biblical literacy is helpful in moving through Unceasing Kindness. In one’s personal study, Lau’s and Goswell’s book could also be used in conjunction with a verse-by-verse commentary, with Unceasing Kindness providing the reader with the bigger picture of how Ruth fits in the scheme of the Old Testament and the whole Bible. Overall, Lau’s and Goswell’s work is strong with much to commend it. 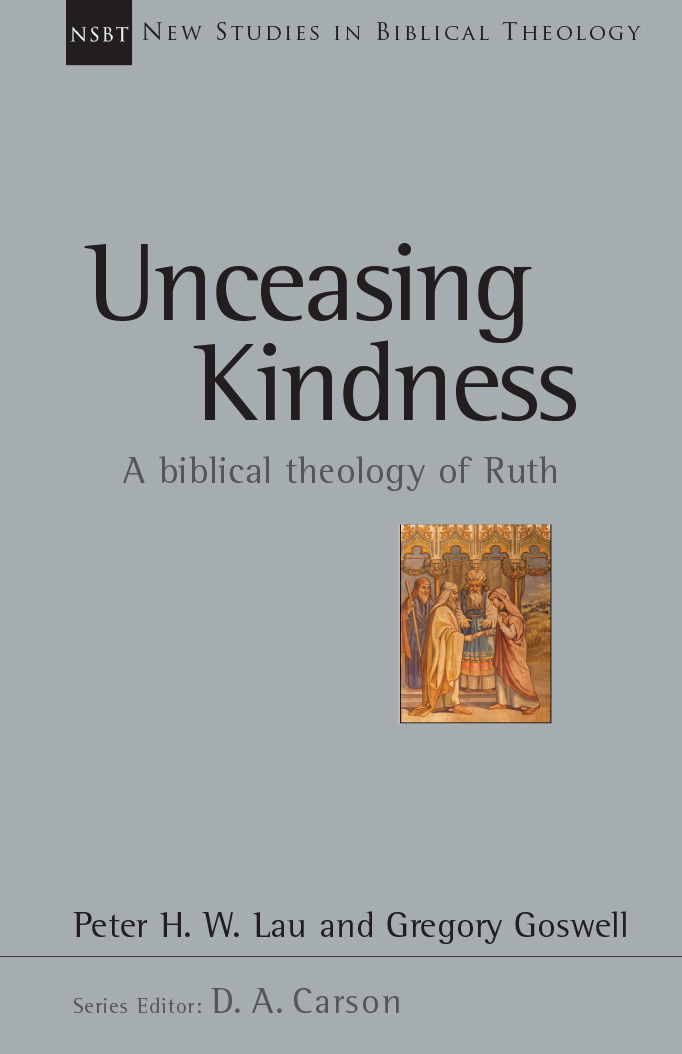