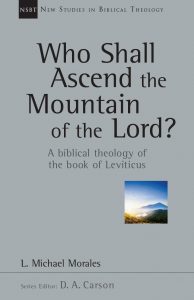 Dr. L. Michael Morales is professor of biblical studies at Greenville Presbyterian Theological Seminary and a teaching elder in the PCA. He is also the author of a new book in the NSBT series edited by D.A. Carson, Who Shall Ascend the Mountain of the Lord? A Biblical Theology of the Book of Leviticus. The book of Leviticus is often referred to as the place where Bible reading plans go to die. That is because the content of the book is so unfamiliar that most Bible readers are stumped when they begin working through its content. Even biblical scholars find themselves in unfamiliar territory, looking instead to the NT interpretation of the Levitical legislation and sacrifices rather than working through the material in its original context.

But Morales intends to bring clarity to the confusion by offering a new biblical theology of the book of Leviticus. His main task is to answer the question posed in Psalm 24:3: “Who may ascend the mountain of YHWH?” Morales calls this question the “gate liturgy,” something the Israelites recite as they approach the tabernacle/temple, and which is an undercurrent running through the Pentateuch. In this new study, he provides the framework for answering this question chiefly from the book of Leviticus. The dominant concern of Leviticus, as well as the rest of the Bible, “is the way in which humanity may come to dwell in the house of God” (p. 20). Indeed, Morales states that the primary theme and theology of Leviticus (and the Pentateuch as a whole) is “YHWH’s opening a way for humanity to dwell in the divine presence” (p. 23). A biblical theology of Leviticus, then, is “the theme of dwelling with God in the house of God, and how that reality is finally made possible” (p. 20). This theme arises naturally in the creation narrative and subsequent fall of humanity in Genesis 1-3, reaching its apex in the book of Leviticus, and is clearly discerned in the rest of the Hebrew canon and later New Testament.

In terms of the structure of Leviticus, Morales posits that Leviticus is the center of a Pentateuchal chiasm (p. 29). Thus, the fivefold structure of the Pentateuch emphasizes its significance. Following the work of other Leviticus scholars such as R. Davidson, E. Zenger, and D. Luciani, Morales argues that chapter 16 (on the Day of Atonement) is the high point of the concentric structure of Leviticus, the “capstone of the sacrificial rituals,” which flows into the subject of holy living (p. 29).

Chapters 2–3 place Leviticus in the context of the Pentateuch as the third and central book, following on the heels of the Genesis account of human/Israelite origins and especially of Exodus and the filling of the tabernacle with God’s presence. In chapter 4, Morales argues convincingly that the tabernacle of Exodus has a twofold theological meaning. It is both the dwelling of God (God’s “house,” as it were), and second as “the way to God’s house, that is, the way to God himself, to engage with him in fellowship” (p. 109). The tabernacle, thus, is a microcosm of the cosmos, mirroring Eden-like characteristics in design and function. Moreover, there is correspondence between Genesis and Leviticus with the introduction of the High Priest in the Leviticus account, which Morales says is an Adam-like person (p. 118). Thus, the book of Leviticus shows how the inability for man to enter into God’s presence and live—all due to Adam’s sin in Genesis 3—is gradually abolished in Leviticus 1–10. Like Adam, the Levitical provisions allow for a High Priest realistically to enter God’s presence, even if only once per year. Indeed, the central thesis of the book is eventually stated along these same lines in chapter 5. Who shall ascend the mountain of YHWH? “The one able to ascend is the Adam-like priest, with blood, on the Day of Atonement. This is the way YHWH has opened for humanity to dwell in his presence” (p. 177). In a biblical theological study as this one, the final answer to this question is explained later with the obvious typological connections in the book of Hebrews and the presentation of Jesus as High Priest.

Chapter 5 begins with the defilement of the house of God (Nadab and Abihu, Lev 10:1–3), the need to emphasize the cleansing of the house via laws of the clean and unclean (Lev 11–15), followed by the Day of Atonement ceremony (Lev 16). To be clean means to be fit for the presence of God, while to be holy means that one belongs to God (p. 155). Atonement and holiness are typical summary words in Levitical theology, and Morales agrees insofar as we see that atonement and holiness are the means to an end, that is, the means to Israel’s fellowship and communion with YHWH (p. 125). Life in the presence of God is the key to unraveling the theology of Leviticus, not the themes of atonement and holiness per se. The house of God must be cleansed in order for the people to dwell in its vicinity and live. Thus, the Day of Atonement legislation is paramount since it “narrates the cleansing of God’s house from the inside out” (p. 170). In other words, the Day of Atonement “reverses the presumed steady movement of uncleanness to the tabernacle throughout the year” (p. 171).

Chapter 6 is about Leviticus 17–27 and to a large extent has to do with life in God’s presence. The people are being cleansed and consecrated through YHWH’s presence in their midst, and thus there are implications for daily living (p. 185), the main subject of the latter section of Leviticus. Chapter 7 explores the relationship of the cultic legislation and theology of Leviticus in the rest of the Old Testament, especially the relationship of Sinai with Zion and the development of “mountain theology.” The final chapter moves on to the NT, explaining how the Son of God, the greater High Priest, makes possible the final entrance into the heavenly abode of God for all eternity (p. 259).

Before getting to the positive impact of Who Shall Ascend to the Mountain of the Lord, I will state here a few brief points of criticism. Morales has the tendency to overstate certain texts and themes within Leviticus, or simply the contribution of Leviticus within the Pentateuch. He stresses, for example, that the histories of Genesis and Exodus serve as something of an introduction to the book of Leviticus (pp. 112–13). This comment forces Leviticus up against the importance of other books in the Pentateuch. We might note that the use and reuse of the book of Deuteronomy in the prophets serves a dominant role in the rest of the Hebrew canon (and by NT authors) without diminishing the importance of Leviticus. Morales does not say that Leviticus is the most important book in the Pentateuch, but he comes close. I would rather emphasize the theology of the Pentateuch as programmatic for the theology of the rest of the Bible, not solely the book of Leviticus.

Morales also overemphasizes the Sabbath principle in biblical theology (p. 198), and later, that every movement or prophetic expectation in the Hebrew Bible is defined by the movement to or away from the divine presence (p. 238). On these two points, I find the arguments by Stephen Dempster in another book in the NSBT series more compelling (Dominion and Dynasty: A Theology of the Hebrew Bible, 2003).

These criticisms are minor, however. Many of the books in the NSBT series are robust studies in biblical theology by seasoned scholars. Having read most of these works, I can vouch for the credibility of the series as a whole, and Who Shall Ascend the Mountain of the Lord is a solid addition. As I stated above, Leviticus is not a favorite among theologians, it seems. And even larger OT theological works (and especially systematic theologies) often neglect the book, opting to summarize it as mere “holiness legislation,” or a work of outdated laws about the clean and unclean that are no longer normative. But I suspect this kind of thinking is the result, at least in part, of widespread adherence in Reformed circles to the tripartite division of the law into moral, civil, and ceremonial. This division, while commendable, places greater weight on the moral aspects of the law but deemphasizes the civil and ceremonial since that is what has been fulfilled in Christ (even though there are moral dimensions to the civil and ceremonial laws, too). Morales, a professor at Presbyterian seminary, no doubt adheres to the tripartite division as stated in the Westminster Confession. But Morales also unlocks a theological golden treasure in the book of Leviticus that cannot be reduced to these three headings. In doing so, a grander and richer theology of the Pentateuch emerges, one that has long been neglected.

Morales frames his study around the quest for the presence of God, and perhaps that is why it is such an attractive way forward in approaching the book of Leviticus. Laws and legislation in the OT are so far removed from Christians today in a completely different cultural situation and under a different covenant administration. Morales makes clear what is obscure to most of us. What he provides is a biblical theology of Leviticus in the fullest sense: within the narrative context of the Pentateuch, God has opened a Levitical way for humanity to dwell in his presence. Morales says that this theme is the drama of the Bible (p. 304). And even if one disagrees, we must accept that he has made a compelling case and brilliantly argued his point.

This book is an excellent contribution to biblical studies. Scholars and seminary students should plumb the depths of Leviticus with this book in hand. My main concern is that this book will go unnoticed or simply left unread by many pastors in evangelical circles since it is long (300 pages), in an academic series (NSBT), and published by an academic press (Apollos/IVP). More likely, if this book is neglected it will be because the word “Leviticus” is in the title, and that would be unfortunate. In his commentary on Leviticus in the Continental Commentary (Fortress, 2004), Jacob Milgrom lamented a similar trend outside of evangelicalism: “In Israel today, Leviticus is not in the school curriculum. Even in advanced schools of Torah studies, the yeshivot, Leviticus is not studied in its entirety, but only a verse here, a verse there” (p. xii).

We should be chided for our neglect of mastering a Pentateuchal book like Leviticus, not least of all reading it. Overstatements aside, one would be wrong to understate the potential of Morales’ book in reinvigorating scholars and pastors to examine its content closely. Morales’ fresh approach to Leviticus is welcome, and I cannot think of a better book on the theology of Leviticus that this one. I highly recommend it. 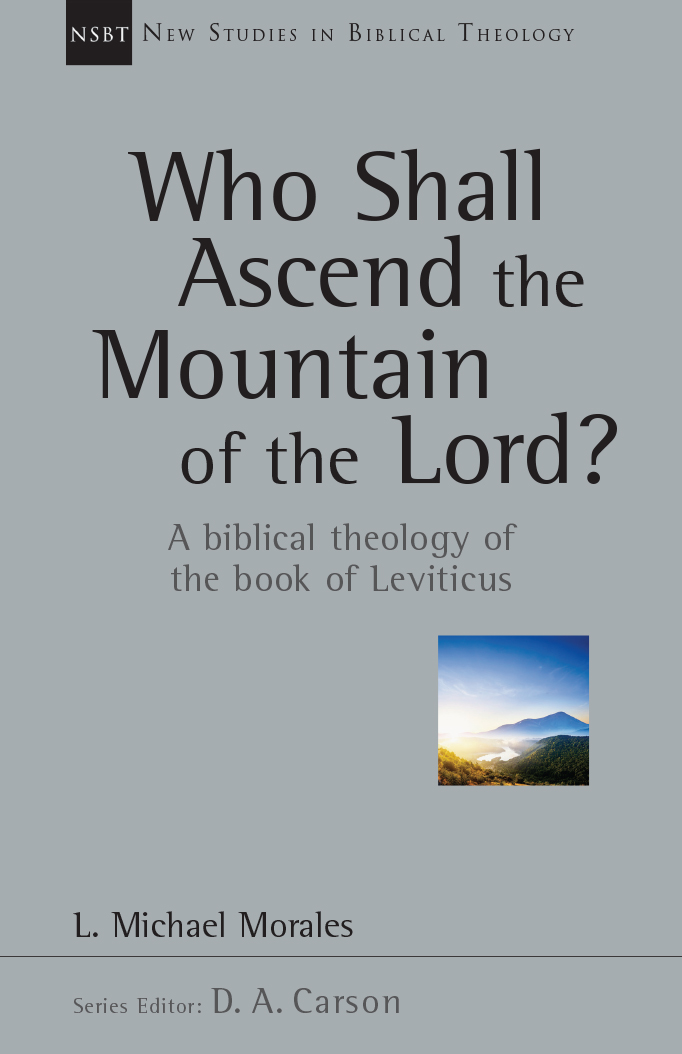