Farris is Professor of Theology of Science at Missional University
and Hamilton is Research Associate at JESociety.org 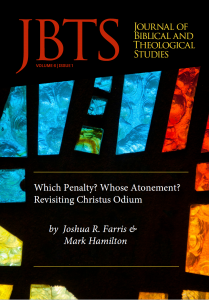 Abstract: So unreasonable is the idea that God the Father hated his Son in order to make atonement for the sin of humanity, it bedevils the mind to imagine anyone attempting reasoning out a theological defense for it. Nevertheless, the so-called Christus Odium variant of Penal Substitution has continued to garner support from when we first discerned its contemporary reappearance and waved the warning flag—initially in the form of a conference paper at ETS (2017) and eventually as an article in JBTS (2018) entitled, ‘This is My Beloved Son Whom I Hate?’ In this paper, we offer up a brief survey of some of the problems that Christus Odium presents, buffeting these problems with two historical accounts of Penal Substitution from John Calvin and Herman Witsius that directly warn against the Christus Odium variant. And then taking a cue from these historical sources, we break down the doctrine of Penal Substitution into some more manageable parts, in order to show that on a logically consistent understanding of this atonement theory, humanity is actually ultimately answerable to the moral law, and not God. The problem that this highlights for defenses made for standard accounts of Penal Substitution notwithstanding, we show that God can in nowise hate his Son as a substitute for offenses that are not answerable to himself. The moral law is as inflexible as it is dispassionate in its demands and it is the moral law to which the Penal Substitution theory is accountable. Thus, if it is the moral law that humanity’s sin has offended, and if the Christus Odium variant is built upon the infrastructure of a Penal Substitution theory, then it looks like Christus Odium falls short of any coherent attempt to privatize a judicial matter that is clearly a public one.