Aramaic to Greek Transliterations in the Western Middle Aramaic[1]

Andrew Messmer is the academic dean at Seminario Teológico de Sevilla in Santiponce, Spain; associate professor at the Facultad Internacional de Teología IBSTE in Castelldefels, Spain; and affiliated researcher at the Evangelical Theological Faculty in Belgium. 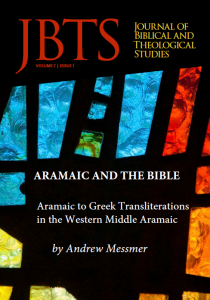 For those scholars and laymen interested in the Aramaic language around the time of Jesus, there are several interesting questions to pursue, some of which are: How was Aramaic pronounced during the time of Jesus? What tools do we have to clarify ambiguities in the Aramaic language? What was the state of Aramaic–Greek bilingualism in Judea and its surrounding environs? There are various tools that researchers use to answer these questions,[2] and one of them is studying transliterations from Aramaic into Greek from the corpus of texts known as Western Middle Aramaic (hereafter WMA). Generally speaking, this division of the Aramaic language spans the time period of 200 BC–AD 200 and covers the geographical region of Judea and its surrounding environs.[3] This article tabulates the instances of WMA transliterations into Greek across four corpora in order to determine the frequency and trends regarding which Greek characters were used to transliterate Aramaic ones during this period.

Read the full article: Aramaic to Greek Transliterations in the Western Middle Aramaic

[1] This article is a reworking of part of my doctoral dissertation; “Maranatha (1 Corinthians 16:22): Linguistic, Historical, and Literary-Contextual Issues” (PhD thesis, Evangelical Theological Faculty, 2017), 58–81, 264–293. The Appendix (264–93) contains some additional information not included here, but this article has the advantage of correcting some minor mistakes, as well as presenting the transliteration data in a more user-friendly format.

[2] For examples from an Aramaic perspective, see. Jonathan Watt, “Of Gutturals and Galileans: The Two Slurs of Matthew 26:73,” in Stanley Porter (ed.), Diglossia and Other Topics in New Testament Linguistics, Journal for the Study of the New Testament Supplement Series 193; (Sheffield: Sheffield Academic Press, 2000), 107–20; David Taylor, “Bilingualism and Diglossia in Late Antique Syria and Mesopotamia,” in J. N. Adams, Mark Janse, and Simon Swain (eds.), Bilingualism in Ancient Society: Language Contact and the Written Text (Oxford: Oxford University Press, 2002), 298–331. For examples from a Hebrew perspective, see Alexander Sperber, “Hebrew based upon Greek and Latin transliterations,” Hebrew Union College Annual 12–13 (1937–1938): 103–274. Sperber’s work covers roughly the same time period as the one under consideration here, and still has value for today, not only for its quality, but also for the wide range of topics it covers. 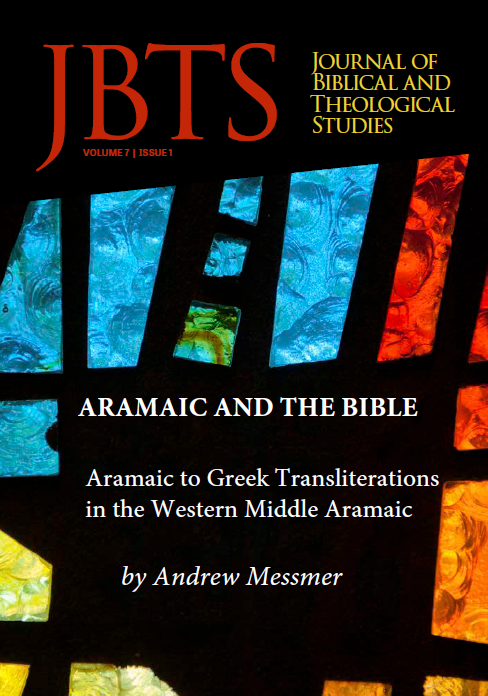